The Nutcracker and the Four RealmsDisney’s latest would be blockbuster isn’t another live action remake of one of its animated classics. That’s not to say it’s particularly good though. This version of the fairytale perennial is based both on the story by ETA Hoffmann and the ballet by Tchaikovsky. It finds Clara (Mackenzie Foy) being […] 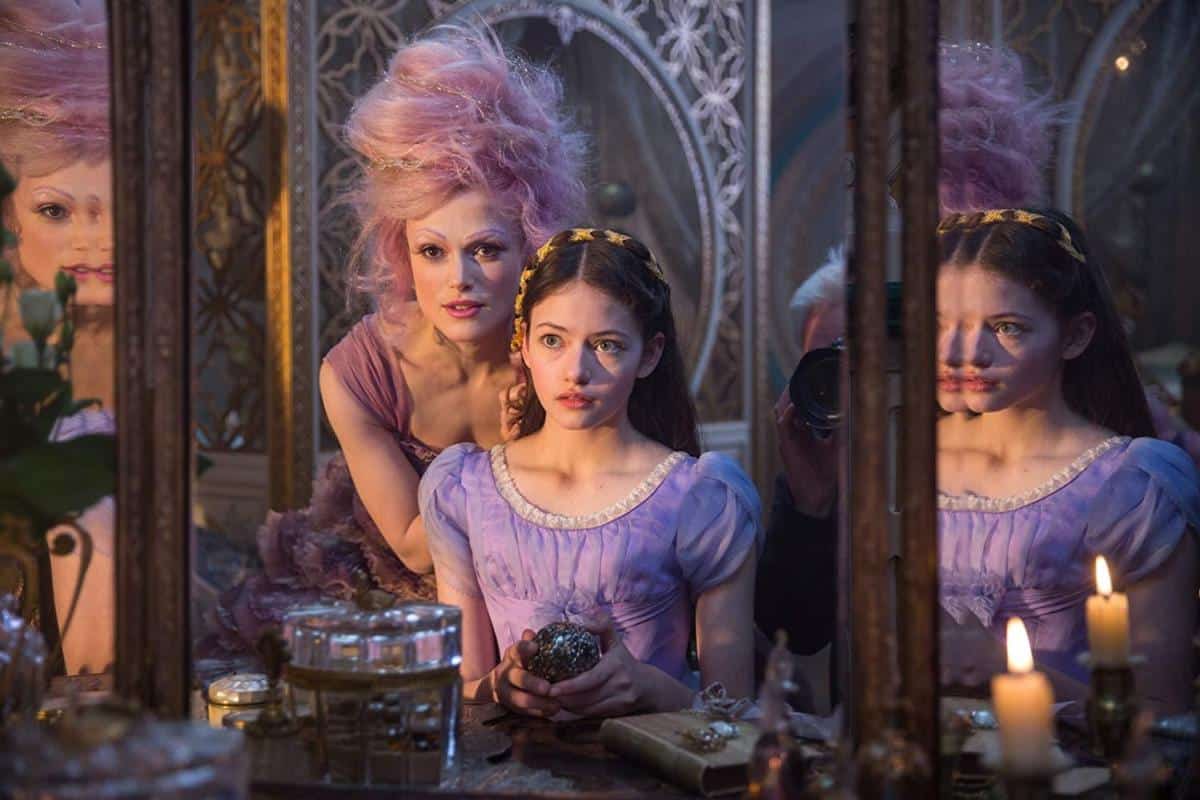 The Nutcracker and the Four Realms
Disney’s latest blockbuster isn’t another remake of one of its animated classics. That’s not to say it’s particularly good though.

This version of the fairytale perennial is based both on the story by ETA Hoffmann and the ballet by Tchaikovsky. It finds Clara (Mackenzie Foy) being given a magical key that used to belong to her late mother, which lets her into a magical world, where her mother was once queen. She finds the world divided, with Mother Ginger (Helen Mirren) apparently plotting to wage war on Sugar Plum (Keira Knightley) and the other rulers of the four realms.

I am acutely aware that this film wasn’t made with me in mind and it may, thanks to its overly busy but sometimes impressive design, prove for its young target audience, but even for them I suspect most of it will prove instantly forgettable. Mackenzie Foy, best known as Bella and Edward’s daughter in the final Twilight film, does her level best with a cardboard cutout role as Clara. She’s largely a typical Disney princess (down to the dead mother and emotionally closed off father), but with a few flashes of empowerment, not the only thing here that is reminiscent of Tim Burton’s take on Alice in Wonderland. Foy’s role is mostly to be the sort of blank slate the young girls in the audience can project themselves on to.

The rest of the cast isn’t lacking talented players, but most are reduced to cameos and have little chance to make themselves stand out against either their own costumes (Richard E Grant is swallowed whole by his ridiculous getup as Shiver) or the set design. A few stand out though, Jayden Fowora-Knight’s performance as the Nutcracker might feel more appropriate if his makeup design was as wooden as his acting. On the plus side, Keira Knightley has a grand old time chomping the scenery, it’s not going to go down as one of her best performances, but she hasn’t seemed to have more fun for ages, and Helen Mirren makes more out of a smallish part as Mother Ginger than you might expect.

There is fun to be had here, but it’s sporadic, and the visuals are more frequently hideously overblown than they are beautiful (though the version of the Mouse King we see is inspired). For me, by far the greatest pleasure of this film were the two dance sequences (one in the body of the film and one during the credits) performed by Misty Copeland, which are far more expressive than anything else in the film, without a word being spoken.
Grade: 2/5

All of Me
Today, Steve Martin is many things; a bluegrass musician, a playwright essayist, occasionally an actor. The fact that Martin is a funny guy comes through in all of these things he now does, but it’s easy to forget that between his Saturday Night Live years and the end of the 1980s, Martin was not just a wild and crazy guy, but one of the most gifted American comedians working in movies.

Martin’s great early films, including noir parody Dead Men Don’t Wear Plaid and the peerless The Man With Two Brains, were often made with Carl Reiner, who was also behind the camera for this variation on screwball traditions, co-starring Lily Tomlin. Martin is Roger Cobb, a lawyer who hates his job and wants to be a musician. He’s asked to execute a will for dying eccentric Edwina Cutwater (Tomlin), who, when she dies, wants to transfer her soul into the body of the young and beautiful Terry (Victoria Tennant). Things go wrong, and Edwina ends up taking over the right half of Roger’s body.

Martin’s performance is little short of a masterclass in physicality, both in terms of how funny he is and how he uses gesture and movement to reveal character. The sequence in which Edwina first winds up in Roger’s body is a laugh riot, with Martin contorting himself as the two halves of his body, now moving under different consciousnesses, try to get back in sync, and initially fail. The moment Roger’s half of his body slowly drags Edwina’s away from the building she wants to enter always has me contorted with laughter. As the film goes on, Martin moderates his physical comedy, but the two halves always feel independent and you can see the effort it takes for them to work in sync and how certain mannerisms, while they diminish, never disappear from either side. In this way, though her voice is always present, he ensures that Tomlin always has some kind of physical presence in a scene. For her part, Tomlin is exceptional, playing off Martin beautifully and creating a character who is present despite having to work within confines the entire time, whether that be Edwina’s wheelchair or the mirrors Cobb sees her in.

The comedy hasn’t all dated brilliantly, the sexual politics are a little suspect now and Richard Libertini’s role as the swami hired to move Edwina’s soul from body to body is at times in its lack of complexity, but most of All of Me remains showcase for two great comic talents.
Grade: 4/5

Mom and Dad
What to say about Nicolas Cage? He’s always been an actor unafraid of extremes and his willingness to take a character to a point that other actors might find ridiculous has resulted in great performances from Raising Arizona and Vampire’s Kiss to . though, his work hasn’t been clicking with me and I think Mom and Dad helped me why. In those performances and in others where his madness comes through, it has felt strategic; either it’s appropriate to the character or those lunatic touches are seen at deliberately chosen moments ( is a great example of this). In Mom and Dad, Cage pretty much begins at an 11 on the OTT scale and by the end of the he’s somewhere around a 36. It’s tiresome.

This is a great pity, because Mom and Dad has a great central idea, and starts well. For no apparent reason, parents begin attacking and killing their children. The first half of the film is fairly expansive, showing the killings taking hold across the town the film is set in (and by implication across the country) before the second half becomes more insular, focused on husband and wife Brent and Kendall (Cage and Selma Blair) and their kids’ attempts to escape their attacks. The first half of the film is by far the more interesting. Early scenes of the attacks have a chilling sort of chaos to them, but it’s when Kendall’s sister is giving birth that the film is at its most inspired. We know what’s about to happen, but it’s no less terrifying and upsetting for that when the new mother tries to choke her child before the cord is cut. The horror of that sequence, and the shot of glowering parents standing outside the hospital nursery, is something the film never comes close to topping.

The second half of the film is often given over to Cage’s patented overacting, which is a shame because right next to him in all of those scenes is a performance that deserves something better to work with. Selma Blair, an underrated actress I’ve long been a fan of, hits all the right notes; grounded as a harried parent and pushing things just far enough over the top when her consciousness is seemingly overtaken by whatever is causing her to attack her children. With it’s less because there’s so little contrast between the two states.

There’s a much better film somewhere in Mom and Dad, but it’s a film with a director more willing than Brian Taylor to rein his star in, and perhaps a film that retains the scale of its first half. For the premise, for that hospital scene and for Selma Blair’s performance, it’s worth , but I wish I liked the rest of the film as much as those elements.
Grade: 2.5/5