By Linda Marric For an animation film primarily aimed at children, Spark: A Space Tale seems to spend an unusual amount of time trying to please its adult viewers. With multiple attempts at referencing anything from Stars Wars to WALL·E ( Andrew Stanton, 2008), director Aaron Wooley tries his very best to inject some much […] 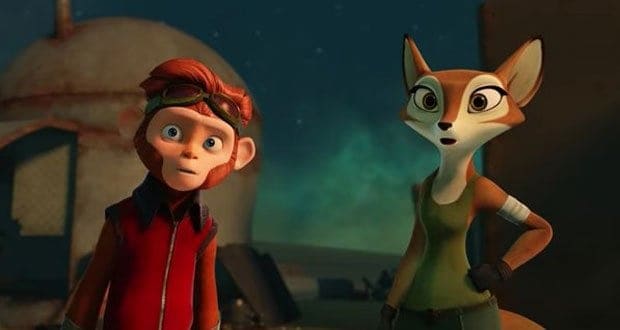 For an animation film primarily aimed at children, Spark: A Space Tale seems to spend an unusual amount of time trying to please its adult viewers. With multiple attempts at referencing anything from Stars Wars to WALL·E ( Andrew Stanton, 2008), director Aaron Wooley tries his very best to inject some much needed life into the narrative, but sadly falls short of entirely convincing. With a voice cast which includes Jessica Biel, Hilary Swank, Patrick Stewart and Susan Sarandon, you would think this would be onto a winner, instead you are left with a feeling of having been served more of the same old generic shtick which no one asked for or is likely to watch. Spark does not only offer an easily forgettable story, but also lacks entirely of any discernible plot or a hook to keep you interested for long enough to care.

Set fo the most part on Bana, a fictional planet inhabited by simian-like creatures, Spark borrows the bulk of its storyline from Star Wars. When his planet is attacked and partially destroyed by a dastardly war lord Zhong (voiced by Alan C. Peterson), young chimp Spark finds himself living on a piece of the destroyed planet with vix (Jessica Biel) a martial art expert fox and Chunk (Rob deLeeuw) a brainy warthog. After discovering his real identity, Spark must go back to Bana and free his people from the tyrannical ape who also happens to be his uncle. Together with a group of misfits and exiled survivors from Bana, Spark embarks on the adventure of a lifetime in the hope of beating Zhong at his own game.

As intergalactic stories go, Spark very rarely manages to offer anything new to the genre, resorting instead to tired old jokes and nonsensical narrative strands which seldom gel together. The problem with the film isn’t just its weak storyline, but rather that it simply fails on all accounts. The computer generated animation, although well executed, is nothing to write home about and ends up looking cheap and hurried.

It would be of course disingenuous to pretend not to having laughed at least 3 or 4 times at the “aimed at the adults in the room” in-jokes and innuendos, but for a film of this calibre to be able to convince, you would need way more than just a couple of poorly thought out gags. Despite the best efforts of its talented cast, Spark: A Space Tale isn’t very likely to set the box office on fire, but is nevertheless likely to please the much younger audiences who won’t care about its formulaic aspect one bit. All in all a disappointing production that could have been so much better.

Spark is on general release from Friday 26th May.