The Red Turtle opens with the sight of a nameless man struggling to stay on-board his small boat in a huge storm. After he wakes on a deserted island, he finds water and fruit to live off, but decides to leave and builds a bamboo raft to sail away on. Each time he tries to […] 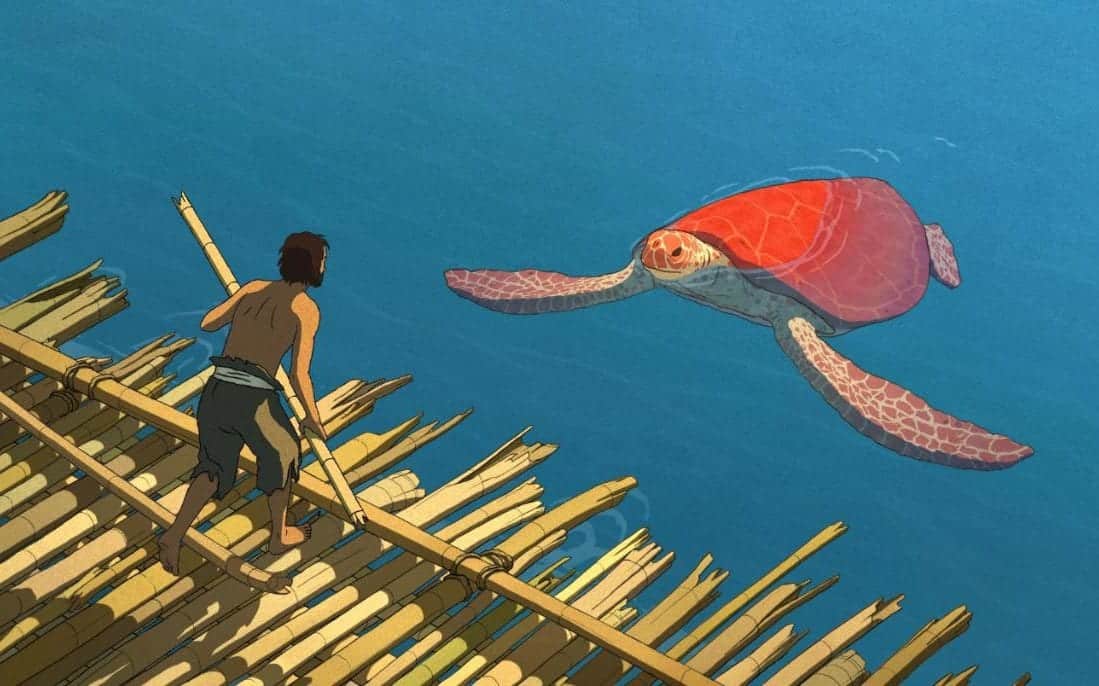 The Red Turtle opens with the sight of a nameless man struggling to stay on-board his small boat in a huge storm. After he wakes on a deserted island, he finds water and fruit to live off, but decides to leave and builds a bamboo raft to sail away on. Each time he tries to leave his boat is destroyed by a red turtle and he is left stranded on the island once more. One night he sees the turtle crawling on the shore and in revenge pushes it onto its back and leaves it to die. In the sun the turtle’s shell begins to crack and in the night it magically turns into a woman.

Produced by the legendary Studio Ghibli, who have previous brought us classic animations like Spirited Away and My Neighbour Totoro, among many others, The Red Turtle contains the beautifully crafted imagery that the studio has built its reputation on over the last 30 years. Often unfairly described as the Japanese Disney, Ghibli’s films have become iconic across the world and are instantly recognisable. Unlike their American counterparts, their films tend to be much more dreamlike and tackle darker and more serious themes, whether the exploration of creativity and adolescent uncertainty in Whisper of the Heart or environmental destruction in Pom Poko.

The Red Turtle comes three years after Ghibli’s previous film When Marnie Was There and after a pause in production as the company revaluated its aims and directions following the retirement of founder and creative driving force Hayao Miyazaki. If reports are to be believed Miyazaki may be coming out of retirement for the second time, but The Red Turtle still represents a departure from the studio’s previous work with Belgium animator Michaël Dudok de Wit becoming the first non-Japanese director of a Ghibli film.

Who knows what lies in store for the Japanese company, but in the absence of figurehead Miyazaki they have managed to produce perhaps the most beautiful animation I have ever seen. There is a lightness and free flow to the entire film and each sequence is visually memorable. Without any dialogue the imagery becomes central to the story. Rich colours run through the film and manage to create an emotive feel. Everything feels tactile and as if it exists in a lived in world, building a sense that there is real danger, as well as possibility.

At 80 minutes in length it may seem that The Red Turtle is all too brief, but with nothing more than gestures and images to tell the story the short running time is probably for the best. However, with so many brilliant amines in their catalogue The Red Turtle can unfortunately at times feel like a side note to what has come before. It might be unfair to compare Ghibli’s latest effort with the many classic films they have produced in the past, but it is not quite as captivating or seemingly substantial as the features that have come to define the company. As enjoyable as it is, I’d be hard pressed to recommend it ahead of its predecessors.

Containing some of Studio Ghibli’s most stunning and beautiful animation, The Red Turtle expertly transforms a simple tale into one of contemplation and wonder. This may not be one of the studio’s masterpieces, but it may still be among the best animated films I’ve ever seen.