By Michael McNulty Ed Mosberg opens Destination Unknown slowly dressing into his perfectly preserved concentration camp uniform. Its thick black stripes serve as a morbid metaphor for his continued emotional imprisonment, for although Ed and the 12 others who feature in this documentary are survivors of the horrors of the Holocaust, they are not truly […] 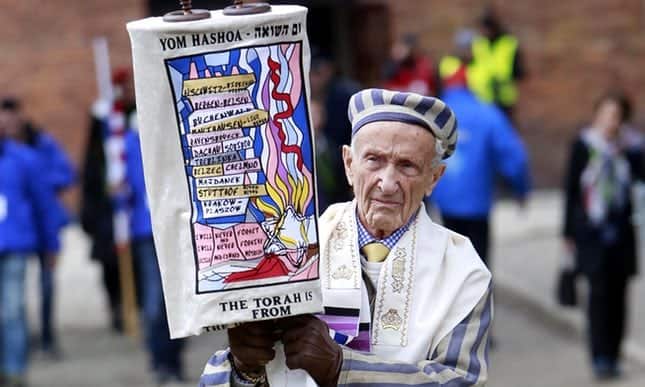 Ed Mosberg opens Destination Unknown slowly dressing into his perfectly preserved concentration camp uniform. Its thick black stripes serve as a morbid metaphor for his continued emotional imprisonment, for although Ed and the 12 others who feature in this documentary are survivors of the horrors of the Holocaust, they are not truly free. They’re experiences in the Nazi concentration camps and on the death marches will always be with them.

Producer, Llion Roberts, having collected over 14 years of footage, teams up with director and editor, Claire Ferguson. The two stitch together through intimate testimony, archival war footage, and personal, home movie, super 8 films the stories of 12 holocaust survivors.

The destination of the title evokes the uncertainty felt by the Jewish population at the time of the Nazi occupation of Eastern Europe, when millions were collected up and transported to: destination unknown. However, Ferguson and Llion’s film extends beyond this and explores the uncertainty and hardships endured by those who survived and who after their liberation were left trying to process their past and put their lives back together. For some, such as Stanely Glogover, this meant never talking to his family about his time at Auschwitz, removing the tattoo that branded him, “hiding it from them” until “I paid a price for it by breaking down.”

There are first-hand accounts from those who suffered under Amon Göth, as portrayed by Ralph Fiennes in Schindler’s List, at the Plaszów labour camps. Helen Jonas and Marsha Kreuzman remember the depravity of the Commandant, his white horse, trained attack dogs, and brutal shootings and Mietek Pemper who helped Oskar Schindler with the list that saved 1,200 people. The film is not without hope, although only fleeting, as Helen, one of those saved by Schindler, points to the decency of his actions as a reflection of humankind’s ability to do good, while Glogover and Eli Zborowski remember those who hid them.

The heart of Destination Unknown is best captured through the words of Ed, which he speaks at a memorial as he wields a whip once used to beat him, “this is already 70 years, I never forgot this” and then later by Eddie Weinstein “my grandchildren are my answer to Hitler’s final solution.” An illustration of the knife’s edge survivors walk, the struggle between trying to move forward, but never being able to forget. It’s deeply moving and a powerful account of pain, remembrance, survival, resilience and promise.

Destination Unknown is in cinemas from Friday June 16th.