Review by Ben Holliday X-Men: Apocalypse is the latest entry in the 16 year old franchise and marks the fourth time director Bryan Singer has helmed an X-Men picture. Unfortunately, it may be time for him to move on from the genre he helped create. The film starts off strong enough with a visceral set […] 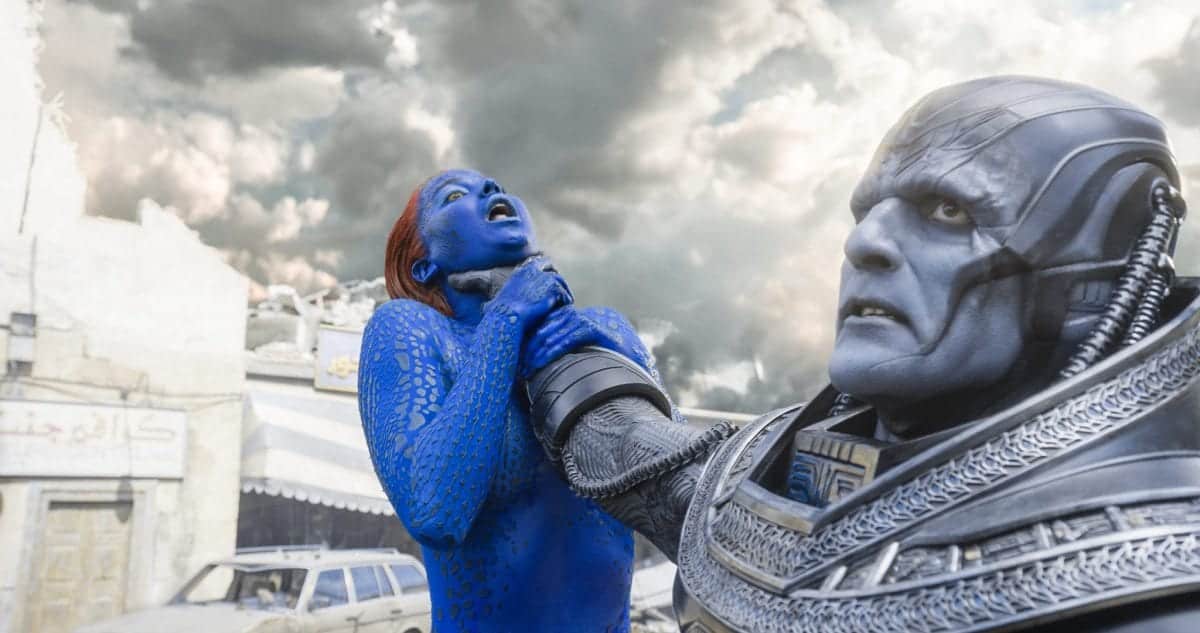 X-Men: Apocalypse is the latest entry in the 16 year old franchise and marks the fourth time director Bryan Singer has helmed an X-Men picture. Unfortunately, it may be time for him to move on from the genre he helped create.

The film starts off strong enough with a visceral set piece introducing us to the main villain Apocalypse (Oscar Isaac) in ancient Egypt. In fact the first half an hour or so flies by, bringing the band back together and seeing where they’ve ended up since the events of X-Men: Days of Future Past. Professor Xavier (James McAvoy) has his school up and running at last, packed with new recruits, including Scott Summers (Tye Sheridan) and Jean Grey (Sophie Turner). Magneto (Michael Fassbender) has found peace in Eastern Europe and started a family. Mystique (Jennifer Lawrence) is now a resistance fighter of sorts, idolised after she saved President Nixon in the previous instalment.

The setup is decent, but performances across the board effectively sum up the issues with this film; inconsistency and the niggling feeling that some of the actors are miffed that they signed a three picture contract. Jennifer Lawrence is as wooden as she’s ever been; seemingly sleep walking through scenes that demand gravitas. You never believe that Mystique is the hero that younger mutants look up to and her efforts to galvanise the X-Men fall especially flat. Sophie Turner also falls into the wooden category, miscast as Jean Grey and struggling with an American accent.

Michael Fassbender is solid once again in his turn as Magneto, but whilst he can sell a scene, including a particularly emotional one, a combination of the script and direction gives the character nothing to do throughout the film. He spends the majority of it surrounded by subpar CGI and staring angrily into the distance. To be frank, responsibility for most of the films misgivings should fall at the feet of Simon Kinberg’s lacklustre screenplay and Singer’s direction.

As for the titular bad guy, Oscar Isaac is a phenomenal actor, but Apocalypse ends up being one of the more forgettable villains in the superhero genre. Voice modulation whilst cool in essence, masks the actor’s performance and he never comes across as particularly formidable despite having an endless array of powers. He wants to end the world for the sake of ending the world and he just doesn’t really seem to do much throughout the two and a half hour runtime. He spends the majority of the final act straining his vocal chords as opposed to his muscles and demonstrating why he should be so feared.

The Four Horsemen are also underserved, with only Magneto having true motivations as to why he’d take part in the destruction of mankind. Psylocke (Olivia Munn) and Storm (Alexandra Shipp) are wasted with hardly any dialogue and action scenes that are poorly choreographed and clearly shot in a studio. With no tangible motivations, you just don’t care for these characters and end up incredibly forgettable like much of the movie. The final battle between the Horsemen and X-Men lacks excitement and feels overly staged and stale. The abundance of CG doesn’t help the cause either; The world’s greatest cities are torn apart and not for one second does any of it feel tangible. Singer has always been a great character director and that works to the detriment of the action here.

The film only shines when the younger cast members are on screen with excellent chemistry and a real sense of enthusiasm for the franchise. Quicksilver (Evan Peters) once again has the stand out sequence of the film and laughs come thick and fast whenever he is on screen. Nightcrawler (Kodi Smitt-McPhee) is infectious and Cyclops is finally given a little justice after being sidelined in previous instalments.

There’s a real sense of Groundhog Day with this latest instalment and the film fails to move the franchise forward. We pretty much leave the characters in the same place that we found them and with other superhero films trying so hard to shake the formulaic shackles of what has come before, Fox need to make some real changes in order to make the X-Men relevant again. The film just doesn’t matter in the grand scheme of things and audiences are demanding heavier stakes from cinematic universes. The X-Men are at their finest when dealing with the tough subjects of racism, segregation and the fear of the unknown. The end of the world just feels out of sync with what their creators intended.

With its odd pacing, inconsistent acting and flat action set pieces, X-Men Apocalypse is one of the weaker entries in the franchise and it is essential that after battling the end of the world, our heroes return to more intimate stakes. For future sequels, of which there will certainly be many, Fox should focus on the next generation of characters and bring the franchise kicking and screaming back down to earth. Only then will it find relevancy in the marketplace it helped kick off in 2000.

X-Men Apocalypse is out in theatres now.