By Leslie Byron Pitt/@Afrofilmviewer This writer remembers trying awkwardly to impress an ex with Waking Life. Much like what one hears about David Forster Wallace’s Infinite Jest or Jean-Jacques Beineix’s Betty Blue (1986), Waking Life does feel like one of those features that certain inelegant young (male) students would use to show their “depth”. Drunkenly […] 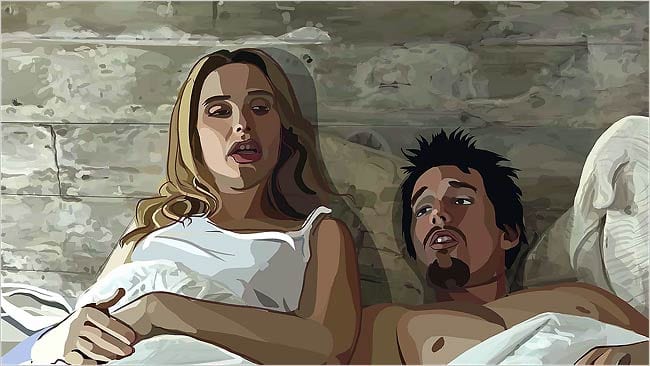 This writer remembers trying awkwardly to impress an ex with Waking Life. Much like what one hears about David Forster Wallace’s Infinite Jest or Jean-Jacques Beineix’s Betty Blue (1986), Waking Life does feel like one of those features that certain inelegant young (male) students would use to show their “depth”. Drunkenly pontificating on the meaning of life to “display their knowledge” but probably just trying to use it to score some points with the opposite sex. It’s a testament to Richard Linklater’s film that now, 15 years on, the philosophical arguments and dreamlike visuals now fully resonate with a more grown viewer. The film’s themes, now more than ever, also embody the filmmaker’s body of work and looks to be one of the director’s seminal pieces.

To many, Linklater is more known for his rebellious mainstream hit School of Rock (2003), a conventional crowd pleaser which teases and toys with Linklater’s bohemian stylings and is the filmmaker’s highest grossing feature to date. In watching Waking Life, it is this feature, along with his debut film; Slacker (1991), Before Sunrise (1995) and his recent work, Boyhood (2014) which solidify the filmmakers humanist leanings. A plot light, idea dense free for all in which a lone traveler wanders an array of lucid dreams and explores a wide range of philosophical issues.

In rewatching Waking Life, it’s wonderfully inventive “rotoshop” design, grand gesturing and navel gazing now feel less like pandering to the “cult” student in class. The heady brew of conversations that are dished up, were probably then considered as a preparation for art and critical thought for the 21st century. Now with the advancement of technology yet our cultural landscapes feeling narrower, Waking Life holds a stronger perception of relevancy.

The very nature of the film, in which animators overlaid animations on top of live action footage (the aforementioned, custom-made rotoshopping), has given the film a unique, dreamy look. It was also, only imitated by Linklater himself in his adaptation of Philip K Dick’s A Scanner Darkly. Re-mastered for Blu-Ray, the visuals retain their crisp, fluid style and smart detail, but it also reminds us of the fact that such animation feels sparse, with cinema/audiences now far more interested in the CGI animation of studios like Pixar than what we see here. The films topics, which deal with everything from social philosophy, to the meaning of life, also feel fresh. Not just due to the film’s execution, but also because of how the topics are approached, and what’s happened since the film’s release. Everything from attacking the methods of control to how we should not write ourselves off as individuals is talked about. It’s invigorating and surprising to see these discourses play out and which moments a viewer will now dwell upon. For this writer as fun it was to see Ethan Hawke/Julie Delpy talk about reincarnation again, it was the appearance of infamous radio host Alex Jones screaming for us to fight for the dynamic human spirit which now lingered in the brain.

Waking Life was released in a year which also featured Vanilla Sky, Donnie Darko, Amelie, A.I. Mulholland Drive, Session 9, Storytelling and Linklater’s own Tape. Many of them have their own, surreal dealings with perception, social philosophy and dreams. The interesting thing here is the films mentioned not only toy with these things, often with a lofty sense of ambition. They also were original with many finding their own space and fans. Waking Life suits these ragtag bunch of films who all wanted us to question our understanding of ourselves. Linkater’s out there vision does the same, but with that freewheeling style that only Linklater could muster. Fascinating talk from interesting talking heads. All very naturalistic. Sometimes funny, nearly always insightful, and in the same engaging style that follows the likes of the Before series or Boyhood.  This film, more than the other films of that year mentioned, does fall under that dastardly criticism “not for everyone” but it was released at a time where a risk would have been taken on it. Now, as American films are starting to feel more constructed to spoon feed simpler information and highlight their broadness Waking Life’s art cinema pretentions could have felt estranged back in 2001. Now they appear a lot more vital.

Extras: Arrow film provides an idiosyncratic array of extras which suit the film well. It features some gorgeous, sometimes slightly cynical short films which fit well with some of the edgier moments of the main film. Their test demos and alternative scenes along with some rich audio commentaries from the director and the animators. There is also a making of which is slightly disappointing in its length, but still worth having on the disc.

Waking Life is out now on Blu-Ray from Arrow Films.