Review By Leslie Byron Pitt Steven Spielberg’s first Disney branded film (it’s weird that it’s taken so long), is a rather wistful adaptation of the beloved Roald Dahl book The BFG. The novel, which is over 30 years old, tells a light-hearted tale of an orphaned little girls relationship with a benevolent giant, as they […] 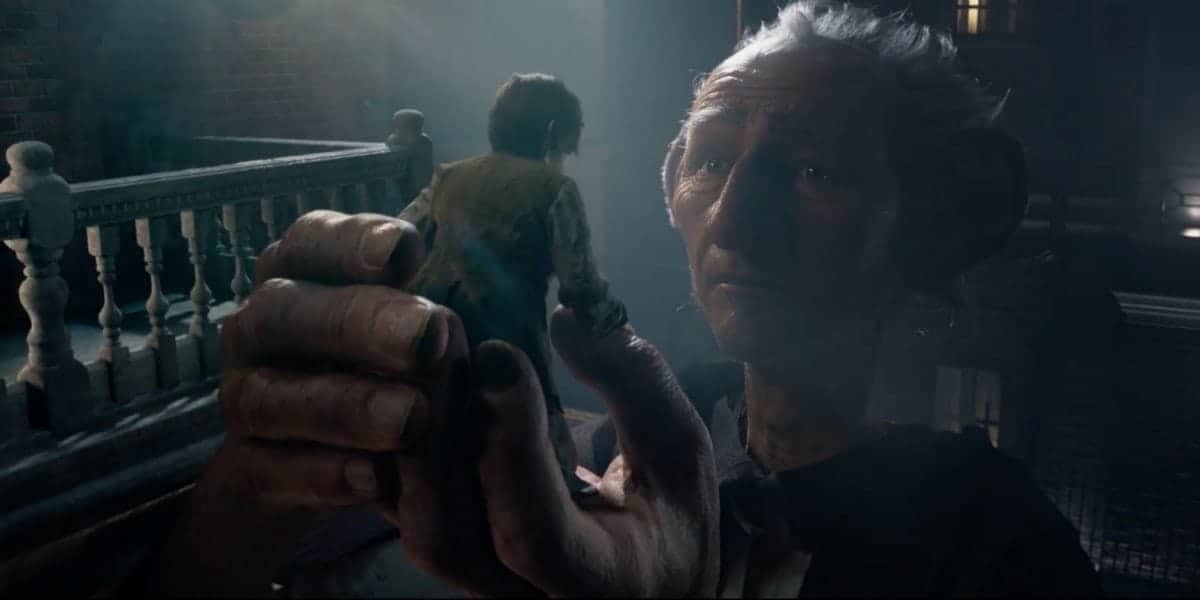 Review By Leslie Byron Pitt
Steven Spielberg’s first Disney branded film (it’s weird that it’s taken so long), is a rather wistful adaptation of the beloved Roald Dahl book The BFG. The novel, which is over 30 years old, tells a light-hearted tale of an orphaned little girls relationship with a benevolent giant, as they work together to stop a group of man-eating giants who look to invade the human world.

This is not the first time that the Big Friendly Giant has been adapted to the screen. The still rather charming 1989 made for TV animation still has a sweet appeal to it. Much of this could be down to the fact that Brian Cosgrove’s film made the wise decision of casting beloved British actor David Jason as the titular character. Placing such a distinctive voice at the center of such a film seems to be key. Jason’s soft, comforting voice is so distinctive and so perfect that even now, many years after my first viewing, my memories go to his delivery of Dahl’s words. His performance of The BFG made a more lasting impression than even the book itself.

This is possibly the issue I have with The BFG as a whole. It’s never my favorite Dahl story, despite being quite an affectionate story. It’s main character, Sophie, never felt as appealing or dynamic as the whip-smart protagonists of many of his other novels. Having a voice like Jason in a previous incarnation of the material, added a little extra to the mixture. Ever the craftsman, Steven Spielberg’s version of The BFG not modest when it comes to slapping on whimsy. London’s streets are delightfully cobbled. Giant country where most of the film’s events occur looks like Spielberg wasn’t just collaborating with Peter Jackson on TinTin, but looking to take visual cues. So much of the BFG’s homeland has a sense of The Shire to it. Although it’s important to note it doesn’t look like a home counties shire of any sort. It seems that Wes Anderson’s Fantastic Mr Fox (2009) comes closer with recreating the Buckinghamshire fields that Dahl resided in later life.

Not like that matters too much. Spielberg far is more interested in building a timeless fairy tale world. It’s no surprise that his cobbled street London feels reminiscent of Bedknobs and Broomsticks Portobello Road, yet the film makes sly references to political heads of state from 80’s when the book was written. Despite some composition issues, the dreamy, pastel-hued visuals (Spielberg once again collaborating with cinematographer Janusz Kamiński) are very appealing to look at and unlike the recent venture into TinTin, the film feels like a Spielberg film.

This may be why it’s easy to feel slightly at odds with the film as a whole. Dahl adaptations seem to suffer when the filmmakers authorship threatens to overtake the novel. The Dahl films which make a mark have been less Charlie and the Chocolate Factory (2005) and more Matilda (1996). Spielberg deftly handles the film’s scale, but the more film savvy may be acutely aware that this is a Speilberg film, rather than a Dahl adaptation. There’s a sense that you understand why J.K Rowling decided against the filmmaker for the Harry Potter series.

The thing about Dahl’s work is the magic is in the words. Not only in the wonderfully inventive ones Dahl  create to describe the things in his universe, but the sing-song prose he would use to dictate and describe the adventure. Such a talent is difficult to recreate for film, although some have come close. Dahl could also give power to his dynamic, resourceful young protagonists, something that doesn’t really occur here. Sophie (Ruby Barnhill) is no Matilda, in fact, she’s a little irritating. Despite the actresses consummate performance, Spielberg and the script do little to enhance her backstory or any feeling towards her as a character. Again this is an issue that could be found in the book itself.

The thrust of the movie lies in Mark Rylance’s sweet natured display as the titular BFG. Watching Rylance smile, whizpop and get to grips with Dahl’s playful wordage is delightful. It’s a performance that almost makes up for the film’s lack of real excitement. Much like Scott Mendelson’s assessment of The Lion King, The BFG lacks a meaty memorable middle to get a hold of. Then again, does it need one? In the screening I went to, the kids (and adults), howled with laughter at Rylance and the creative linguistics that Dahl’s novel provided. It’s also a film which has a drink that makes you fart. Perhaps that’s all you need.