Review by Leslie Byron Pitt/@Afrofilmviewer It’s a good guess that the Now You See Me franchise will be the closest thing the younger set of Millennials will get to an Ocean Eleven series. They have the same amount of gloss and slick pizzazz you’d expect from something from Soderbergh’s trio of films. The all-star caper […] 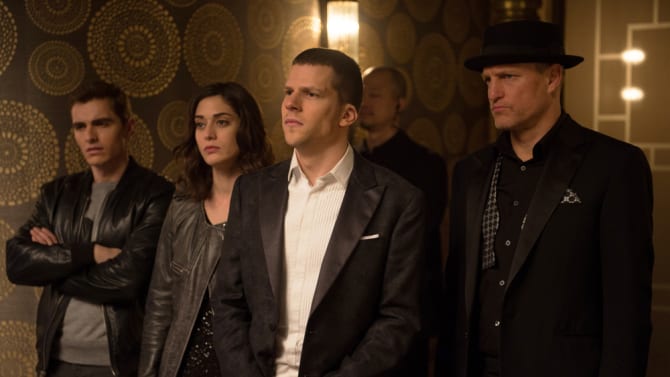 It’s a good guess that the Now You See Me franchise will be the closest thing the younger set of Millennials will get to an Ocean Eleven series. They have the same amount of gloss and slick pizzazz you’d expect from something from Soderbergh’s trio of films. The all-star caper aspect, a thing we seem to see less of, also makes a viewer think of Clooney, Pitt, and Co. Now You See Me 2 is so bold in its application of the Ocean films, it straight up nabs whole elements of Ocean’s Twelve. Even down to the idea of a character “doubling up”. Jon M. Chu’s knowledge of the caper is limited by the glam, glitz, and gimmicks, but not in providing a tale worth weaving.

The Horseman are underground, waiting for their next move. A golden opportunity for the gang to try their Robin Hood tricks arises, but isn’t it too good to be true? Turns out that that a tech genius has had his eyes on the magicians and now the fab five must utilise all their skills to pull off an improbable heist in the mysterious city of Macaw.

Despite being able to stuff the basic plot into a top hat, the convoluted and bloated narrative will be an irritation for those who enjoy a good story well told. If you enjoy a storyline in which plot gaps can be covered up by the simple statement: “it’s magic!” then you be in luck. This is a film in which even its smaller contrivances are annoying. I’m watching one of the world’s top magicians, why can’t they not work a simple finger trap?

Such contrivances are only compounded by the fact that there’s just too much fat and not enough meat here. We have an unnecessary sequel, which re-introduces unneeded characters, filling in any gaps with more characters. The film has no space to breathe. In-between moderately dazzling set-pieces and plot “explanation”, the film has no real time to spend with the people that we’re watching. It tries to shoehorn inner conflict within the tribe, as well as a new love interest, yet it has no time to dwell on these things properly. We have to get to plot point B.

As a director, Chu is becoming a seasoned filmmaker of superfluous second movie fodder (See also the Step Up and G.I. Joe series’ respectively). This is a shame because his eye for fun action beats can be seen. Granted, there’s nothing particularly new here, and like so much Hollywood fare, the sequences are over edited or indulgent. Still, it’s hard not to smile when the film manages to pull off a ridiculous static room stunt or a deceptive market stall stand-off. It’s these moments that fans of the perfectly-fine-on-its-own first film will enjoy the most. Now You See Me 2 with its flimsy story and strategic location setting, only really highlights itself as an unlikely cash cow with one eye on the lucrative Asian markets. The real diamond in the rough, however, is the inclusion of Lizzy Caplan. Her sarcastic, winking performance is the kind of sexy you just can’t teach. Now to get David Mamet to write and direct her in a heist movie. That would be a caper worth capturing.

Now You See Me 2 is released theatrically on Monday 4th July.