by Leslie Byron Pitt Brutal from the outset, and leaner than bison meat, Brendan Muldowney’s Pilgrimage may not hold the same relentlessness as Neil Marshall’s historic chase feature Centurion (2010), but it’s a film which holds scenes of a latent potency when it breaks free of it’s relaying of the plot. It doesn’t break the […] 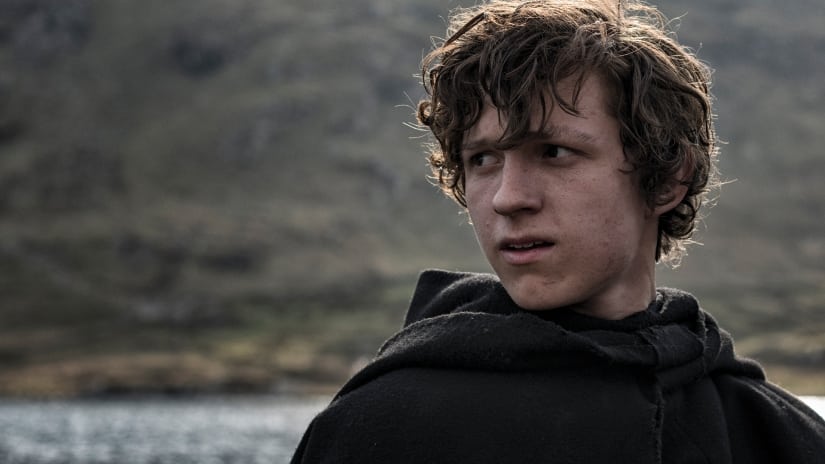 Brutal from the outset, and leaner than bison meat, Brendan Muldowney’s Pilgrimage may not hold the same relentlessness as Neil Marshall’s historic chase feature Centurion (2010), but it’s a film which holds scenes of a latent potency when it breaks free of it’s relaying of the plot. It doesn’t break the mould in any real way but is the type of fringe piece which could get a lot of traction with an audience, if it had the right backing.

Despite it’s well-crafted, desaturated visuals, it’s never a showy film. It lays its cards on the table very quickly. A group of monks are required to escort a sacred religious stone across treacherous Irish terrain. With the relic being tracked by hidden enemies and the motivations of its movements shrouded by murky intentions, the loyalty of the youngest of travellers (Tom Holland) is severely tested.

Pilgrimage may be sparse in execution, but Muldowney’s knowledge of craft ensures that a ramping tension can be felt without. Muldowney, director of the explicitly violent, sadly underseen 2009 film Savage does enough with a limited screenplay to highlight the simmering ugliness that can reside within men when a chance for power can be grasped.

Both Tom Holland and Jon Bernthal will indeed catch people’s eyes a lot more, in their upcoming comic book outings, yet there’s much to enjoy from their performances. Holland captures the naivety needed for the film’s young protagonist, while Bernthal (playing a repentant mute) again gets the chance to show his impressive tactility as an actor of physical performance. It’s within the moments when Bernthal gets to execute brutal violence, in which the film is at its most vivid. This plays as a great foil with Holland’s more passive and fretful tone. As one would expect with a film such as this.

This isn’t a film which surprises. We know who will die and often know at what point to. The film is so straightforward, it is doubtful that anyone will be shocked by any of the double crosses or revelations that transpire. However, Muldowney’s eye for detail and brutality as well as the solid input from the enthusiastic cast, ensure that Pilgrimage may not be remarkable, yet it remains compelling.

Pilgrimage is out on DVD from Monday 3rd July.