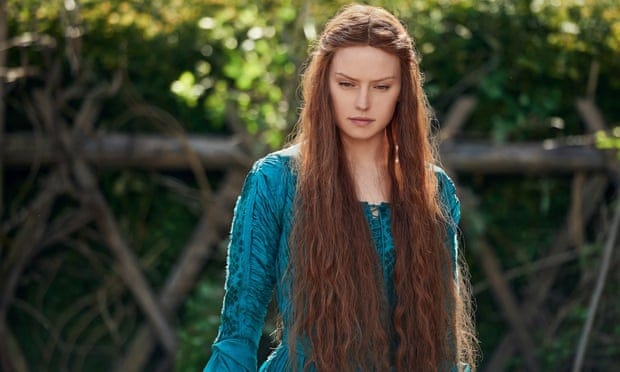 A re-approach to Shakespeare’s Hamlet sees events unfold through the gaze of his love interest, Ophelia.

Based on the young adult novel by Lisa Klein, interpreted by Australian director Claire McCarthy, it tells the story of a tomboy Ophelia who grows up to become a lady-in-waiting and marry her prince, all through a web of conspiracy and nuance. In this instance, Ophelia is not so much Shakespearean tragedy but more a light-hearted suspense drama.

Set in a Danish kingdom, a motherless young Ophelia, is taken in by Queen Gertrude (Naomi Watts) at Elsinore Castle. Fast forward to grown-up Ophelia (Daisy Ridley), the odd one out and picked on in a harem of ladies-in-waiting. Yet to their annoyance, her uniqueness carries most favour with the Queen. Ophelia captures the attention of buoyant Prince Hamlet (George Mackay) and a secret romance ensues. Ophelia and Hamlet secretly marry. Matters start to escalate in the royal court, as Hamlet’s father is murdered likely by his own brother Claudius (Clive Owen) who then proceeds to couple up with Gertrude, much to Hamlet’s horror. A lengthy battle around the kingdom unleashes, Hamlet flees for his life leaving Ophelia to deal with the wreckage.

At sparing moments, I was surprisingly taken in by the film’s pace and intrigue. More in the style of Agatha Christie ‘who done it’; as secret bilateral plots fester, conniving characters trying to undo each other, all under the veneer of royal decorum. There are some welcomed jiffies peppered throughout, even though thinly explored, that hint at the supernatural. Ophelia is frequently sent by the Queen to a hidden abode deep in the misty forest, the dwellings of what I assume is Gertrude’s identical twin sister; the witch Metchild (also played by Naomi Watts) to pick up her regular order of youth tonic.

Yet the overall sensation whilst watching Ophelia is one of matters feeling drawn out and lagging. Plot points over-explained; possibly in an effort to resemble the style of the original play. Also, the bizarre occurrences of what can only be described as editing mishaps, a possible symptom in the director’s efforts to speed things up or pack in as much possible. Some scenes jump from one to the next without a smooth gradation, jolting you out of your watching experience. However, this pales in comparison to the film’s bigger irritant, the writing. This is a faux Shakespeare dialogue that continually switches to present day lingo, proving even more distracting.

Ridley’s Ophelia is commendable; giving depth, complexity and a tranquil stealth that challenges the misogyny of the status quo. Mackay ‘s Hamlet is entertaining but just too bouncy and over theatrical. Watts unfortunately feels miscast, not so much due to her acting, which is expectedly good and admittedly she is working with a rather problematic script, but it’s her appearance and fashion. She looks too modern, even in the elaborate period costume. A make-up or wardrobe malfunction? That could further explain Metchild’s budget looking sorceress get-up; something out of a school play rather than a Hollywood movie.

Premiering at Sundance 2018, Ophelia has not seen the light of day till now, suggesting at possible troubles getting picked up, despite its prominent cast. After seeing the film, I somewhat agree with the possible reluctance of distributors but not wholeheartedly, as it can be saved by Ridley’s understated performance and McCarthy’s engaging if uneven efforts to shake things up.