Wyndham Hacket Pain @WyndhamHP For all our dreams of packing our bags and travelling around the world for the most part they remain just that – dreams. Of course we have friends who have gone to exotic countries on their gap years, or who have had a holiday of a life time but before long […] 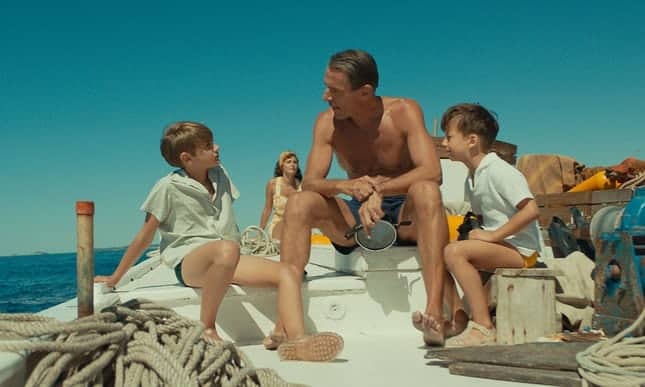 For all our dreams of packing our bags and travelling around the world for the most part they remain just that – dreams. Of course we have friends who have gone to exotic countries on their gap years, or who have had a holiday of a life time but before long they have returned to their normal lives. To seemingly abandon everything and set out on your own odyssey seems to be all but an impossibility.

Based on real life events, The Odyssey begins in 1948 where former naval lieutenant and inventor of the aqua-lung Jacques Cousteau (Lambert Wilson) lives an idyllic life by the sea with his wife Simone (Audrey Tautou) and two children. Not content with his sheltered life spent scuba diving, Cousteau dreams of sailing around the world and filming the oceans. He shares his dream with potential sponsors and before long he is traversing the seas.

The plot does seem a bit Steve Zissou – there are even times when Cousteau and his crew can be found wearing Bill Murray’s red wool hat. In fact the similarities are not accidental. The famed oceanographer Cousteau, who produced as many as 120 documentaries including The Silent World and World Without Sun that both won the Best Documentary Academy Award, was actually the inspiration for Wes Anderson’s The Life Aquatic with Steve Zissou.  The Odyssey may be based on real life events but there is still plenty of invention and poetic licence. It is very much a romanticised depiction of events that tells the story in broad strokes.

The two films share more than just plot points. The Odyssey is equally preoccupied with family and the relationship between Jacques and his son Phillippe as Anderson was. It is the changing nature of this dynamic that is at the centre of the story. The changes do at times fit a little too tightly into the structure of the film. Their relationship seems to corrode and re-establish itself at moments which are convenient for the wider story.

Towards the end the focus does shift towards the environment. The thematic changes do mirror Cousteau’s increased environmentalism but this shift can feel a bit artificial and forced. All things considered though, I don’t mind these issues being brought up since currently species extinction is happening at a faster rate than at any other point in our planet’s history. I would rather issues of environmental degradation be raised and feel forced than be completely overlooked.

Director Jérôme Salle is best known for his film Anthony Zimmer, which unfortunately has an English remake called The Tourist. The direction is generally good and the movement between decades is particularly well done, with a change in style accompanying each time period. The cinematography becomes more stripped back and less rich as the film progresses. Early shots that resemble an advert for an ultra HD television pave the way for a style more akin to the New Hollywood of the 1960s and 70s, with even the occasional nod to the French New Wave. The costume design and make-up help each period feel authentic. It can often be very difficult to convincingly show aging on film, as J. Edgar proved a few years ago, but here Jacques and Simone Cousteau age 30 years in the most believable of manners.

Taking place over four decades, The Odyssey is surprisingly enjoyable and entertaining. It may be slightly too long and at times a bit sentimental but good storytelling and central performances mean it is able to overcome these issues. Despite some minor flaws it is intriguing to see just how far someone is willing to go to keep their dream alive.

The Odyssey is in cinemas from Friday 18th August.