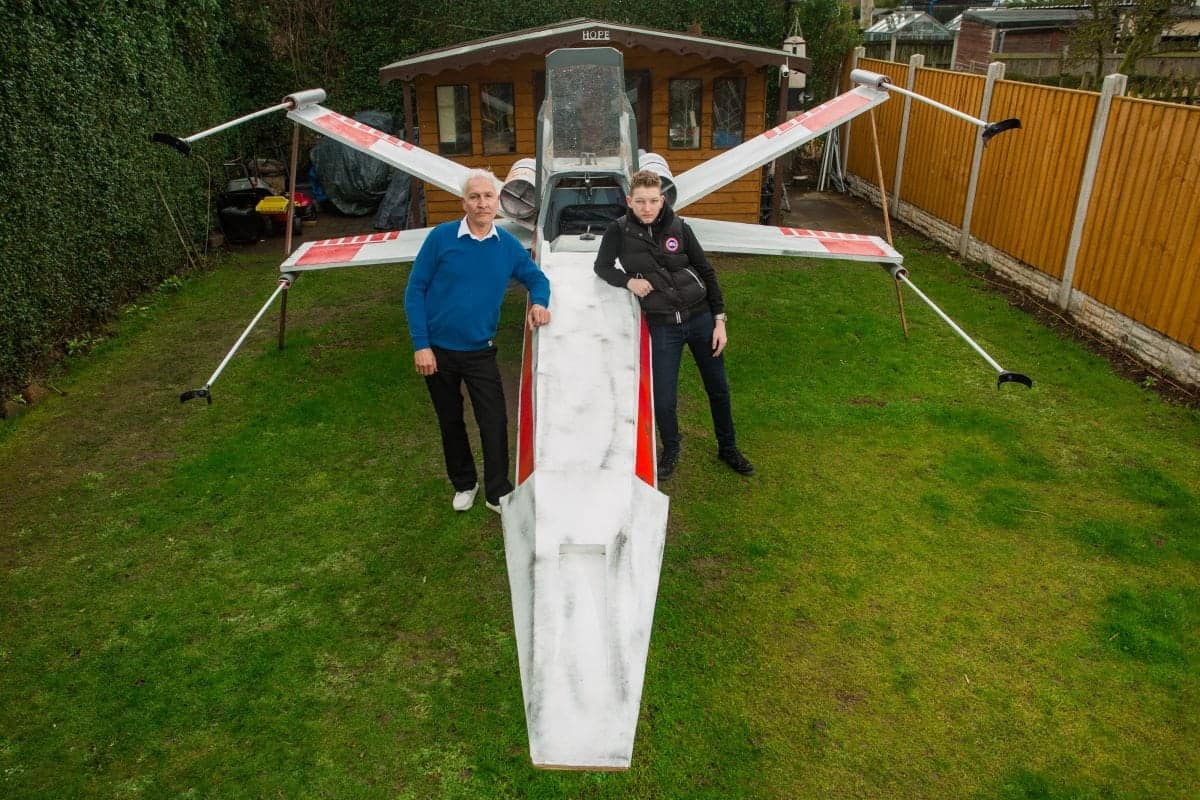 A movie extra has paid tribute to Star Wars legend Mark Hamill – by constructing a life-size replica of the actor’s X-WING.

Richard Butler, 65, was so excited Hamill was returning to the sci-fi saga two years ago he built a 21ft-long version of the trademark aircraft in his garden.

As the credits began to roll on a new trilogy of films with Star Wars: The Force Awakens in 2015, father-of-four Richard couldn’t wait to get started on his new project.

It was the first time Hamill, now a 66-year-old ageing actor in the twilight of his career, had again taken on the role as Luke Skywalker.

Richard, who built the movie prop by hand using fibreglass, plywood, plastic and metal, thought what better way to pay tribute to the light-sabre-wielding star.

The ‘battlescorched’ X-wing starfighter Red 5 has been fitted with half-a-mile of cables and includes flashing lights, joy sticks and the wings even move up and down.

Richard, who has spent £750 on the build so far, said: “I heard on the down low that he was coming back to the big screen thanks to a friend who was working on the latest Star Wars film.

“That’s when I had the idea, and that’s when I decided to start the project. He’s old like me, both ageing actors in the industry and thought why not.

“I’m really pleased with the way it has turned out – I’ve built a lot of other things including Daleks – but all the grandkids absolutely love to ride in it when they come to visit.”

The colossal movie prop sits under a large sheet of tarpaulin in the secluded part of Ricky’s back garden in Doncaster, South Yorks.

However, he is worried the signature piece of kit which first featured in the first Star Wars film: A New Hope could give me an influx of tourism outside his home.

Ricky, who is a semi-retired actor and played Sam Neil’s double, said: “I don’t want these Star Wars lots knowing exactly where I live and then my house has turned into a museum.

“I haven’t counted the man hours it has taken me to build this over the two years – but I’ve spent about £750 on it so far.

“Over the winter months we’ve hardly had the weather to work on it properly, but now hopefully in the next few months it will be fully finished.”

Ricky says the impressive feat is not yet fully complete and sounds of the X-wing still need to be installed into the 21ft-long, 16ft-wide movie marvel.

He was helped by his 15-year-old youngest son Prince Butler – who helped replicate the inside of the X-wing “inch-perfect”.

He added: “It needs to be seen to be believed – every man has his price and I would be willing to sell it to the highest bidder.

“However, for the moment, the grandkiddies are still having too much fun.”

Adding: “Maybe later in the year I shall see if a buyer is available.”