Colin Young, 35, burst into a hair salon wearing a mask and demanding cash 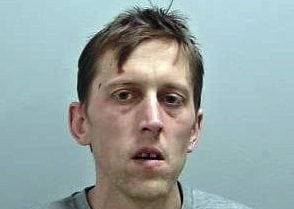 A thug who threatened to stab a pregnant hairdresser with a needle infected with AIDS during a terrifying robbery has been jailed for nine years.

Colin Young, 35, burst into a hair salon wearing a mask and brandishing a knife before demanding cash.

Hairdresser Ann Dodd, who was 22 weeks pregnant, confronted Young and refused to hand over the takings from the till.

Young then pulled out a syringe full of a reddish-brown liquid and told her chillingly: “I don’t want to give you Aids.”

incredibly, Miss Dodd then grabbed a motorcycle helmet to ward him off and Young fled empty handed.

A court heard he had committed a number of other crimes in the space of an hour on January 16 in Nuneaton, Warks., before he was finally arrested.

Young, of Bucks Hill, Nuneaton, pleaded guilty to two charges of robbery and three of attempted robbery, as well as possessing an offensive weapon and a bladed article.

On Wednesday he was jailed for nine years at Warwick Crown Court.

Judge Richard Griffith-Jones told him: “You have not committed offences of this gravity before, and I recognise you are facing your first custodial sentence.

“The most grave of these offences is the attempt to rob Ann Dodd, who was obviously pregnant, and what you did was despicable.

“To approach her with a knife and a syringe when she was in her vulnerable state was, frankly, wicked.

“Her coolness and courage stands in contrast to that.

“Ann Dodd was incredibly brave, and she should be commended for that.

“She must have been particularly frightened because she had a baby inside her.”

Ann Dodd and another who prevented a separate robbery, Dean Wylde, were each awarded £400 from public funds in recognition of their courage.

The judge added: “It takes a lot of courage to confront someone who’s armed.”

The court Young walked into Johnny Rocketts hair salon with his face masked and brandishing a knife.

Prosecutor Richard Franck said: “He was confronted by a courageous hairdresser Ann Dodd, who was 22 weeks pregnant, who told him to ‘get out.’”

Young demanded: “Give me the money. I can see you’re pregnant, I don’t want to hurt you.”

Miss Dodd, who had been in a back room and had come into the shop after being alerted by a colleague told him to get out – at which Young pulled out a syringe.

It had a reddish-brown liquid in it, which may have been blood, and told her: “I don’t want to give you Aids.”

Young demanded £40 to go away, but Miss Dodd bravely refused – and grabbed a motorcycle helmet from a shelf to try to ward him off if he came towards her.

Young turned his attention to a customer and demanded money from her, but she told him she didn’t have any and had been going to pay by card, and he then left, again empty-handed.

Colin Charvill, defending, said: “He lost his job and he lost his accommodation because he coped with matters by taking class A drugs, and the offences were a response to a craving for drugs.”