★★★☆☆ Midsommar is writer/director Ari Aster’s follow up to his debut smash hit, Hereditary. Hereditary focused on family life and the horrors that begin at home with guilt and resentment boiling over, descending into a grisly nightmare. Here with Midsommar, Aster serves up a similar affair but instead of a family unit, Midsommar is break […] 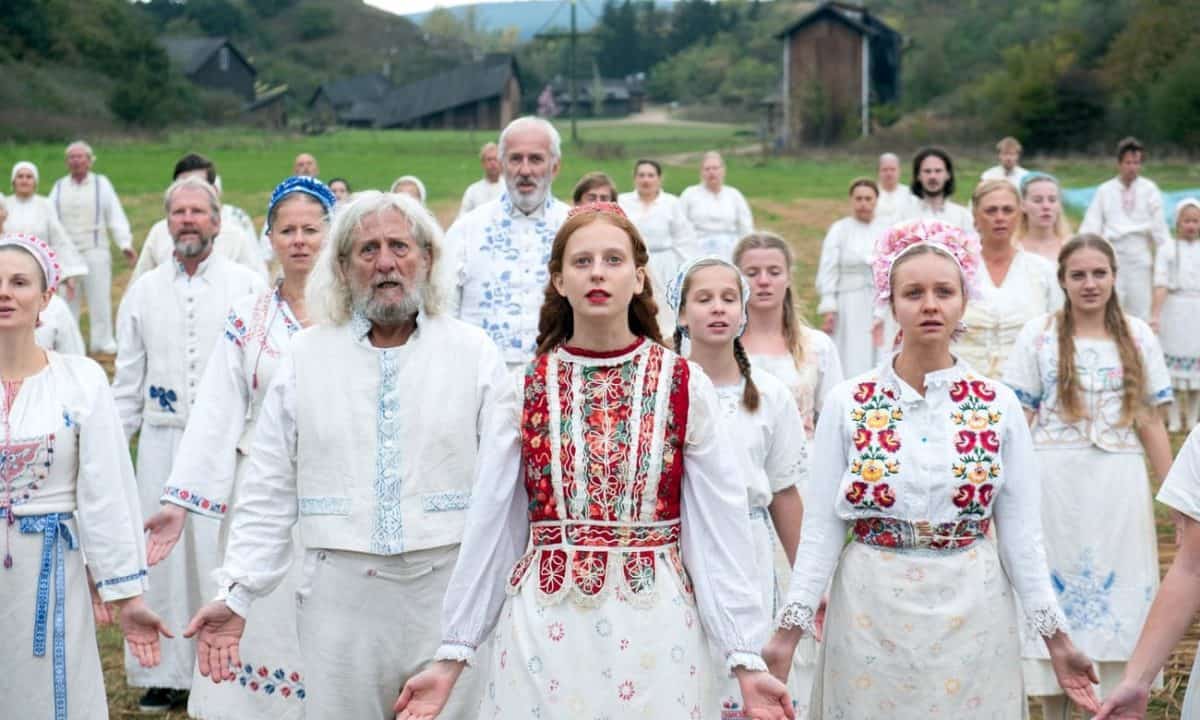 Midsommar is writer/director Ari Aster’s follow up to his debut smash hit, Hereditary. Hereditary focused on family life and the horrors that begin at home with guilt and resentment boiling over, descending into a grisly nightmare. Here with Midsommar, Aster serves up a similar affair but instead of a family unit, Midsommar is break up movie wrapped up in pagan horror. The movie clearly shows that Aster is more than a one-hit wonder but there is a little more than a sprinkling of second album syndrome with Midsommar.

The main character is Dani (Florence Pugh), a young American woman who has suffered an appalling loss but is not getting any meaningful help from her pathetic excuse of a boyfriend, Christian (Jack Reynor). He is detached and clearly wants out from the relationship and is encouraged by his friends to do so. When Dani calls his phone frequently, Christian’s friend Mark (Will Poulter) describes the calls as “literally abuse”. The smallest of olive branches is offered to Dani when the boys invite her to join them on a boys trip to Pelle’s (Vilhelm Blomgren) hometown to take part in its ancestral Midsommar celebration, an event that only takes place every 90 years.

When the group arrive in Pelle’s hometown to meet the isolated community he comes from known as the Harga, they seem friendly enough but bound by tradition and ritual. Everything from the way the eat, do laundry, and flirt with the new guests seems off kilter.

Aster deserves credit for creating a believable world in which these people live. As the events of the celebrations go on they become increasingly barbaric and the deaths evermore gruesome. The way in which the characters break in turn, is exciting to watch.

At the heart of the film is the relationship between Dani and Christian. Pugh’s performance is stand out with her ability to show her emotional reaction to the horrors she is witnessing, at one point wailing with such ferocity it is borderline comical before descending back in to horrific.

Reynor’s performance as a deer in the headlights is good but sometimes lacks the range with which Pugh can show her emotions. Reynor’s character poses a question of Aster’s ability to draw fully formed characters and there lacks a subtleness to the characters outside of Pugh’s Dani to make them 100% believable. Reynor does well with the material he has been given but his motivations beyond, ‘I’m bored of this girl now but I have to stay with her until she’s better’ seem scant. Along with this, Christian’s friend Josh (William Jackson Harper), a fellow anthropologist documenting the customs of the Harga is given little to do apart from ask questions and seem outraged at certain character behaviours. A heated scene mid-way through the film between Josh and Christian is the finest of the film from a narrative perspective and one I wished was explored further but again Aster decides to draw the film in broad strokes and only let Dani have any light and shade.

Aster has created a film that opens with a sequence so controlled and perfectly executed that your hopes for the remaining 2hrs 15mins are exceedingly high. Aster does not follow through on this original promise but he has crafted an engaging film despite the opaque narrative and limited characterisation. Aster has his masterpiece within him, this much is obvious from his first two feature films, but neither Midsommar or Hereditary can sustain their ideas for the whole duration. Third time lucky? Aster should be hoping so.