By Linda Marric Fresh from igniting a lively debate about Netflix and their validity as fully fledged competitors at this year’s Cannes Film Festival, Okja finally arrives to Netflix for the rest of us to devour. Directed by Bong Joon Ho (The Host, 2006) and co-written by British writer Jon Ronson (Them, So You’ve Been […] 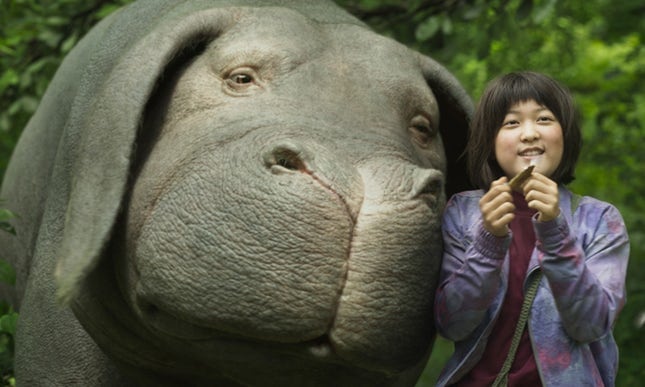 Fresh from igniting a lively debate about Netflix and their validity as fully fledged competitors at this year’s Cannes Film Festival, Okja finally arrives to Netflix for the rest of us to devour. Directed by Bong Joon Ho (The Host, 2006) and co-written by British writer Jon Ronson (Them, So You’ve Been Publicly Shamed, The Men That Stare At Goats), Okja offers a wild and wonderful story about animal welfare in a near future, and mixes beautifully nuanced poetic realism with shambolic slapstick humour. With hints of Jenet and Caro’s Delicatessen (1991), the film is a joy to watch, and when it’s over you will want to go back and watch it all over again. This being Netflix, who’s going to stop you from doing just that.

Korean teenager Mija (Ahn Seo-hyun) has spent her childhood living in an isolated mountainous part of south Korea with her grandfather. Having been entrusted with the welfare of genetically modified female super-pig by Lucy Mirando (Tilda Swinton) C.E.O of the Mirando corporation, Mija has grown to love the pig named Okja like a member of her own family. When a group of officials from the corporation, headed by creepy Dr Johnny Wilcox (Jake Gyllenhaal), arrives at her home to claim the animal back, Mija is shocked and unwilling to cooperate. Despite Mija’s objections, Okja is bundled into a large truck and is sent on her way to New York for a “super pig pageant”, but things don’t go quite to plan when the pig is kidnapped by The Animal Liberation Front (ALF).

With a a mixture of “Harajuku” and Ghibli inspired aesthetics, Bong Joon Ho is able to immerse his audience in this wonderfully chaotic world without being showy or self-indulgent. His depiction of Mija and the members of the ALF headed by Jay (Paul Dano), is comedic yet touching. Dano is fantastically unnerving, like only he can be, and who doesn’t love him for that reason alone. It’s also worth mentioning The Walking Dead’s Steven Yeun as K, for a thoroughly commendable performance in both English and Korean. Swinton is wonderfully bonkers as megalomanic Lucy Miranda and Giancarlo Esposito does a great job as her Machiavellic right-hand-man Frank Dawson.

Okja will not only make you fall in love with it, but it will also make you question the future of farming and the meat industry as it stands. Its message is clear as is its depiction of animal cruelty, and if this doesn’t end up making you question your meat-eating habits, very little else will. A beautifully crafted and genuinely touching production which offers so much more that you initially bargained for. Okja is everything you want from it and more.

Okja is in cinemas from Wednesday 28th April.