By Linda Marric It isn’t often that you come across a factual feature film which is capable of hitting its audiences the way Rahul Jain’s Machines does. The film which offers a look into to the intricacies of modern day labour, not only manages to wake in its viewers a sense of solidarity towards its […] 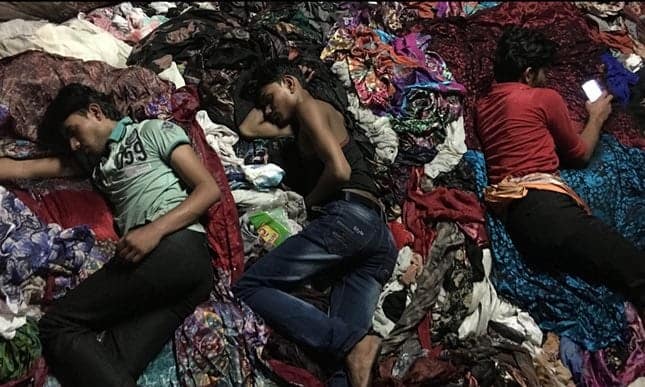 It isn’t often that you come across a factual feature film which is capable of hitting its audiences the way Rahul Jain’s Machines does. The film which offers a look into to the intricacies of modern day labour, not only manages to wake in its viewers a sense of solidarity towards its subjects, but it also manages to ignite feelings of anger and dismay at the dehumanising conditions they have grown accustomed to at the hands of ruthless factory owners.

First time director Jain offers a visually compelling look into the lives of a group of textile factory workers in India and explores their day to day lives in the belly of the beast. Meandering through the corridors of a big soulless factory building, Jain allows his audience to be part of the action without ever making a personal commentary on the action talking place. Stripped completely from narration, and although not explicitly political to start with, the film offers the western consumer a chance to discover the faceless people behind the cheap garments that adorn their high streets and department stores.

From the repetitive actions performed by the workers which renders them part of gargantuan machines around them, to the nonchalance in performing these back-breaking tasks without ever complaining, Machines is truly one of a kind. Jain manages to say more by leaving it all to be said by the subjects themselves. His interviews with the workers are stripped bare with only their replies left in. Taking himself out of the equation allows the viewer to fully understand the inner monologue of those suffering in silence and how they reconcile themselves with what is essentially modern-day slavery. Some even buying into the idea that they don’t really need the money because it will lead to them squandering it.

Jain who as a child walked through similar corridors of factories owned by his family, knows more than anyone how compelling the sounds made by these repetitive mechanical actions can be. Using this knowledge to his advantage, the director allows his audiences to experience those same feelings of getting lost in the sounds which at times can feel very comforting. What starts of as an almost artistic representation of industrial intricacies, eventually turns into a cri de cœur to the rest of the world to take action against the arduous and inhumane condition depicted in the film.

Culmination in a surprising confrontation from the workers of the director himself, Machines allows those who have until now remained without a voice, to finally put their thoughts across. Jain fully understand the need for these people’s stories to be told and doesn’t beautifully without ever resorting to an overly sentimental approach or simplistic moralising.

Machines is in cinemas from Friday 19th May.