By Leslie Byron Pitt Troubled adolescent John Wayne Cleaver is surrounded by death. In his small quiet Midwestern hometown, he balances school with a part-time role working at his mother’s funeral home. Recently diagnosed as a sociopath, John spends his work life cracking dark jokes about the cadavers and freaking out the people at his […] 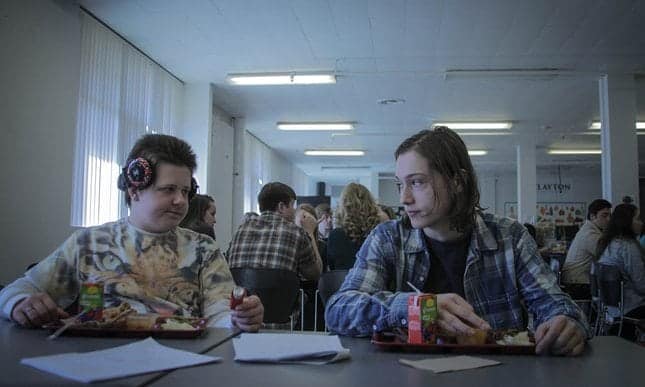 Troubled adolescent John Wayne Cleaver is surrounded by death. In his small quiet Midwestern hometown, he balances school with a part-time role working at his mother’s funeral home. Recently diagnosed as a sociopath, John spends his work life cracking dark jokes about the cadavers and freaking out the people at his school with his morbid essays. Not much happens in this ma and pa, middle American town, however, a spate of mysterious murders has recently plagued the town. John decides that his disturbed personality is the perfect attribute needed to find out who the murderer is.

Welcome to the New Urban Gothic. A blend of decaying contemporary life, modern day morality tales and heightened angst. Films such as It Follows (2014), A Horrible Way to Die (2010) and The Babadook (2014) have quietly found a little cubby hole to call themselves home. These are films in which the sleepy, non-descript settings and locations which the characters inhabit become desolate metaphors for their fractured mind states. Based on Dan Wells series of novels, I’m Not A Serial Killer joins this group of films. It’s drab urban surroundings, captured in grainy 16mm by cinematographer Robbie Ryan, illustrate the bleak shadows and shades of grey that cloud the mind of the film’s protagonist. The industrial factories and smoke clouds which litter the background are notable not only for the cynical gloom they help represent but appear to highlight the slow death of industrialisation that the west has been struggling to get to grips with. This might be a stretch for a small budget film in which is a straightforward supernatural mystery from a narrative standpoint, yet it’s a visual landscape which helps give proceedings an edge over other films with shoestring budgets.

That said, the problem I Am Not a Serial Killer is that it lacks that element of dread which looms large over the films mentioned. This is a film of superb technical craft but little in the way of any real tension. It’s clear who the films culprit will be from the opening credits, but that’s not really the point. What is missing is the discomfort that’s supposed to be felt when we see what this killer might do as well as the conflicts which lie in our protagonist, who has self-set his own rules to stop himself from slipping down a similar path of bloodshed.

There’s still a decent amount to gain from I Am Not A Serial Killer. There’s a feeling of a YA version of Dexter by way of The Dirties (2013) about the film. While leisurely paced, the film stays involving throughout. Director Billy O’Brian also ensures that the film puts its budget to good use. The film always looks and feels bigger than one would expect from its budget, with good use of effects both practical and digital. Performance-wise, lead actor Max Records (the munchkin from 2009’s Where the Wild Things Are), has grown into a satisfactory presence on screen, while the supporting cast of Laura Fraser and Christopher Lloyd help provide a solid foil for Records to play off from. While the film lacks somewhat in the fear factor, it’s still a surprising film from a thematic point of view. Not only does the film’s location and visuals give it a sense of relevancy, as the plot slowly reveals itself, we are given a subtext which pits individuals of distinctive generations against each other in a sly, yet timely manner, which again, highlights that I Am Not A Serial Killer carries a certain amount of distinction to it, although it may be more of a one-time curiosity than a genuine classic.

Extras: There’s some good stuff here. We see a test shoot/Mood cut with Max Records from three years ago, some deleted scenes which look clearly cut for time, and storyboards and behind the scene photographs. It’s clearly the type of film which would have been interesting to hear a commentary for, but in this day and age of diminishing physical media, beggars cannot be choosers.

I Am Not A Serial Killer is on DVD, Blu-ray & Digital HD Monday 20th February.