Harry Dean Stanton, the gaunt actor of many cult films and TV shows including Paris Texas, Cool Hand Luke, Repo Man and Twin Peaks has died aged 91. Born in Irvine, Kentucky on 14 July 1926, son of a tobacco farmer and hairdresser, he grew up in a musical family. He could sing and play […] 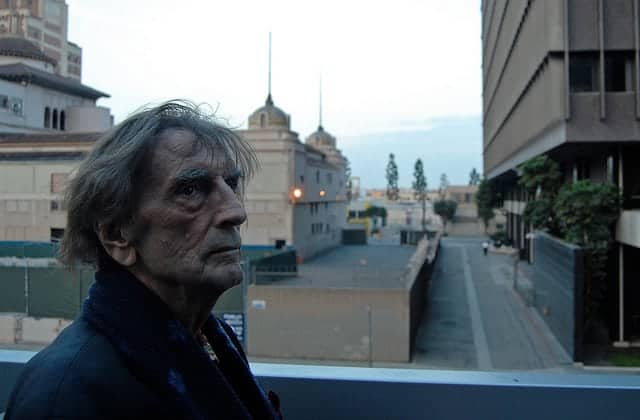 Born in Irvine, Kentucky on 14 July 1926, son of a tobacco farmer and hairdresser, he grew up in a musical family. He could sing and play country songs on guitar.

“I had to decide if I wanted to be a singer or an actor. I was always singing. I thought if I could be an actor, I could do all of it,” he said in an interview for a 2011 documentary on his life.

During World War II he served in the navy as a cook.

It took him a while to make his mark as an actor. He had a small part in In How The West Was Won, 1962. But Independent and cult movie roles followed, with many other actors citing Harry Dean Stanton as a favourite to act with.

And in many cult independent movies such as Two-Lane Blacktop, Cockfighter, Escape from New York, Repo Man, before appearing in perhaps his greatest role, starring in Wim Wenders’ Paris, Texas in 1984.

Screenwriter Sam Shepard, had met Harry Dean Stanton in a bar in Santa Fe, New Mexico. “I was telling him I was sick of the roles I was playing,” Stanton later recalled, “I told him I wanted to play something of some beauty or sensitivity. I had no inkling he was considering me for the lead in his movie.” Shepard offered Stanton the role of Travis, whose tortured, broken soul is almost mute for the whole hauntingly beautiful film.

Aged 58 he starred in the indie classic, as well as Alex Cox’s Repo Man.

He was good friends with Jack Nicholson, with whom he lived for two years, as well as Bob Dylan and Hunter S Thompson, whose funeral he sang at.

David Lynch,  who directed Harry Dean Stanton in his most recent screen appearance in Twin Peaks: The Return, paid tribute to his friend and collaborator: “There went a great one. There’s nobody like Harry Dean. Everyone loved him. And with good reason. He was a great actor (actually beyond great) – and a great human being – so great to be around him!!! You are really going to be missed Harry Dean!!!”