By James McAllister If Stoker served to showcase how devilish director Park Chan-wook could be, his new film, The Handmaiden, proves he’s equally as devious. It’s a heated, and handsomely mounted period potboiler that has been adapted by the Korean wunderkind with a gleeful sense of stylised excess, from British author Sarah Waters’ 2002 novel […] 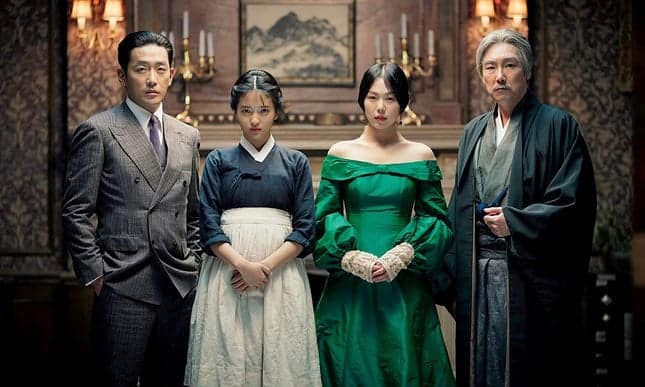 If Stoker served to showcase how devilish director Park Chan-wook could be, his new film, The Handmaiden, proves he’s equally as devious. It’s a heated, and handsomely mounted period potboiler that has been adapted by the Korean wunderkind with a gleeful sense of stylised excess, from British author Sarah Waters’ 2002 novel Fingersmith.

Transplanting the story from Victorian England to 1930s Korea, when the country was still under Japanese rule, Chan-wook – working with his regular co-writer Seo-kyeong Jeong – introduces us to the eponymous handmaiden, Sook-hee (Kim Tae-ri), as she prepares to take up residence in the household of Lady Hideko (Kim Min-hee); a mysterious Japanese heiress whose sheltered existence is governed entirely by her imperious uncle, Kouzuki (Cho Jin-woong). Sook-hee, young & naïve, immediately appears keen to try and ingratiate herself with her new mistress, but her motives are by no means honourable; she is, in reality, a pickpocket who has been recruited to help Fujiwara (Ha Jung-woo), a conman who plans to marry Hideko and then have her committed to an asylum so he can steal her inheritance.

Hideko & Sook-hee’s relationship may initially appear contrived, but it soon blossoms into something unexpectedly passionate. The striking performances from Min-hee & Tae-ri are comparably consumed by an enigmatic fidelity that’s relied on by the plot, but the attraction that develops between the two characters is transparent; their yearning glimpsed in the longing glances, fleeting touches, and quiet giggles they share.

There are visible shades of Peter Strickland’s Duke of Burgundy & Ang Lee’s Lust, Caution to be recognised here. In the past, Park Chan-wook has spoken at length about his desire to see a greater feminine representation within cinema, and credit must be given for his elegantly considered attempts to explore the complexities of female sexuality & lesbian love, soulfully magnified by the two spectacular lead actresses.

The Handmaiden’s feministic accolades, however, remain up for debate. As you would no doubt expect from a director who made his name with films defined by their visually graphic surfeit, the sex scenes Chan-wook composes are both extensive and explicit, yet troublingly they never strike you as empowering. Though suitably steamy, they suffer from being seen through a stereotypically male-gaze that favours flesh-filled wide-angles over more emotionally intimate close-ups; a troubling contrast from some of the titles it aims to emulate. Seductive, but, frustratingly, never truly satisfying.

The Handmaiden is on release from Friday 14th April.