By Linda Marric Loosely based on real life events and staring two of the most accomplished actors of their generation, Hampstead is a big-hearted romantic comedy which is only slightly let down by a less than believable narrative and an even more far-fetched premise. Directed by Joel Hopkins and written by Robert Festinger, the film […] 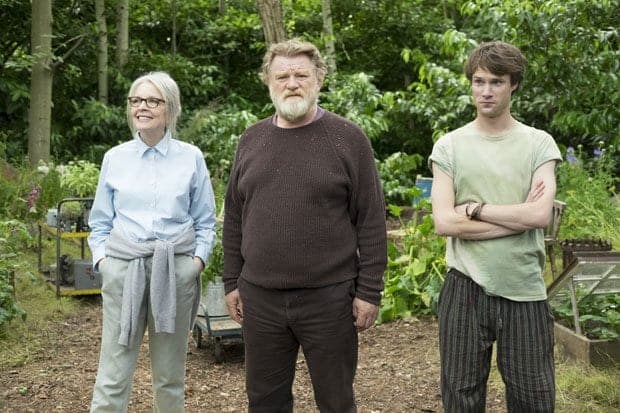 Loosely based on real life events and staring two of the most accomplished actors of their generation, Hampstead is a big-hearted romantic comedy which is only slightly let down by a less than believable narrative and an even more far-fetched premise. Directed by Joel Hopkins and written by Robert Festinger, the film has two plot lines running alongside each other, one being a David versus Goliath tale about the dangers of mindless gentrification, and the other one aims to tell a charming love story between two people of a certain age and the struggle they face on their quest for love and happiness.

Diane Keaton is Emily, a recently widowed sexagenarian who has struggled to come to terms with being alone again. Riddled with debt after the sudden death of her husband, and unable to move on from finding out about his cheating, Emily decides to bury her head in the sand instead of facing up to her problems. After a chance encounter with grumpy loner Donald (Brendon Gleeson), the two soon embark on a unconventional courtship, which is met with disapproval and gossip from neighbours and friends alike. As the story develops, we find out that Donald has been living on a plot of land in a cabin he built for himself 17 years beforehand, and which is now being threatened with demolition by greedy developers.

Hopkins does his best with a less than perfect script and a romantic storyline which some might find overly saccharine, however the story does hold its own and in time you will find yourself rooting for its protagonists. Keaton is brilliant as ever, but whether you believe that this most American of stars can pass for a true Hampstead local (with or without American accent), is another thing altogether. Gleeson puts in a thoroughly believable performance as a cantankerous old grump which he manages to convey perfectly. A special mention must go to a brilliantly unnerving, and wonderfully creepy turn by the always excellent Jason Watkins in the role of Emily’s annoyingly clingy new accountant.

Yes Hampstead might lack nuance and Keaton’s particular brand of kookie sticks out like a sore thumb amongst the more sedate parts of the capital, but on the whole the film manages to win you over in the end, which is more than enough to keep its audiences interested. By no means a perfect film, but one which has the ability to keep you entertained till the very end.

Hampstead is in cinemas from Friday 23rd June.