There was a moment of brief dismay during this year’s Oscar ceremony, when it suddenly looked as if a brutish form of populism would once again break our optimism. For many, the awards were already a foregone conclusion, the early momentum swinging, as expected, towards Damien Chazelle’s delightful La La Land & Barry Jenkins’ compelling […] 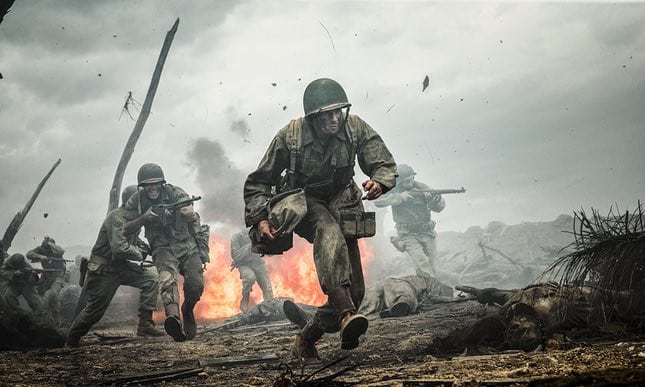 There was a moment of brief dismay during this year’s Oscar ceremony, when it suddenly looked as if a brutish form of populism would once again break our optimism. For many, the awards were already a foregone conclusion, the early momentum swinging, as expected, towards Damien Chazelle’s delightful La La Land & Barry Jenkins’ compelling Moonlight. So when Mel Gibson’s barbarous wartime blockbuster Hacksaw Ridge earned a surprise win for Best Editing, it momentarily planted a thought that – despite indications to the contrary – maybe, just maybe, the Academy would instead favour this aggressive, loud-mouthed outsider.

On this occasion, thankfully, there was to be no upset – unless, of course, you were a La La Land producer. And let us thank our lucky stars, for if there was to be an image that could sour our collective mood, surely it would be sight of an ill-mannered anti-Semite having yet more praise heaped upon him for making a movie that’s barely worth your attention.

Gibson, working from a script collaborated on by Robert Schenkkan & Andrew Knight, is visibly enamoured by the extraordinary real-life accomplishment of his central character, Private Desmond Doss (an impassioned Andrew Garfield); a conscientious objector with a Seventh-day Adventist upbringing, who went on to receive the Congressional Medal of Honor for bravery during the Battle of Okinawa. Indeed, an extended sequence that sees Doss defy the orders of retreat sent down from his superiors, to try and save as many of his squad mates as he can, captures Doss’ gallantry with a forceful intensity.

Sadly, the true sense of sacrifice made by those who served alongside him are never rendered with the same acute poise. Having used the prolonged opening act to melodramatically emphasise his protagonist’s crises of faith, Gibson drags his audience onto the frontline and begins unforgivably hurling morbid images of flesh wounds & fatalities at them from all angles. There’s a clear desire on the director’s part to try and emulate the cruel, visceral horror of warfare we witnessed in Spielberg’s Saving Private Ryan, but he habitually appears to find more gratuitous satisfaction in showing the savage severity of the soldier’s suffering: DP Simon Duggan’s camera lingering on the gruesome lacerations inflicted on those who have fallen with an uneasy regularity.

Claims that Hacksaw Ridge somehow symbolises a creative revival in the Australian star’s troubled career seem misplaced. Particularly given that, in purely artistic terms, many have long considered him to be a commanding cinematic visionary; his previous directorial effort, 2006’s Apocalypto, rightfully garnered great critical success, despite being released mere months after his infamous DUI incident. In contrast, this blunt & bloody World War Two epic is so prosaic, and so numbingly violent it could be easily interpreted as a gut-wrenching cry for help.

Hacksaw Ridge is available on DVD from Monday 22nd May.