A selection of films from the ongoing Glasgow Film Festival 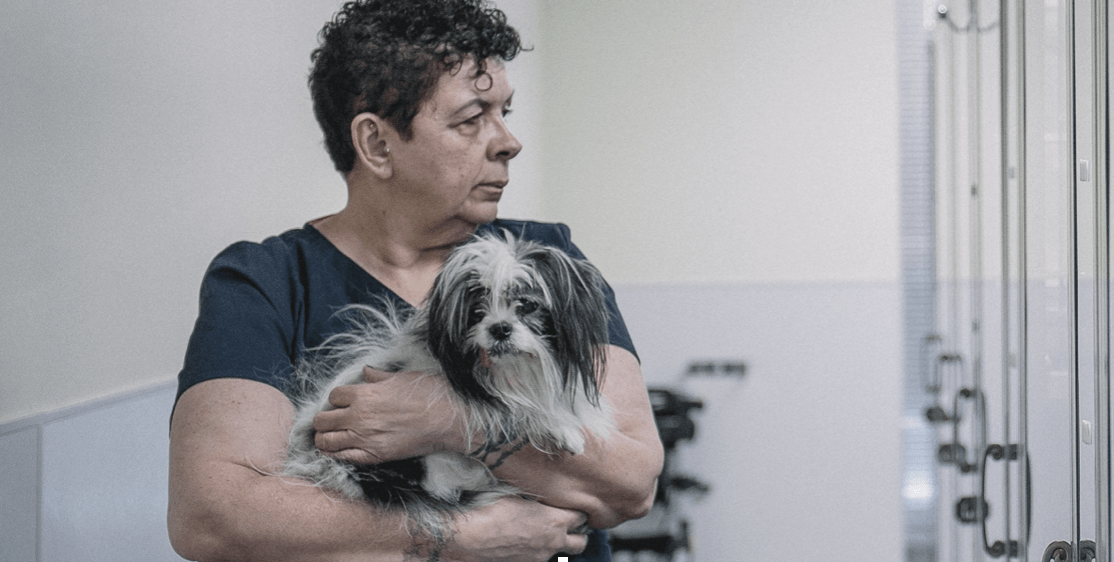 Murmur zooms-in on the life of Donna (Shan MacDonald), a lonesome retiree alienated from her daughter and is having to do community service, for drunk driving, in an animal rescue. Acquainting herself with countless adorable furry beings, she suddenly has access to unfettered companionship. Firstly adopting an old pooch only for it to trigger an insatiable appetite to rescue more and more of them. With Donna’s addictive personality knowing no bounds, the situation becomes predictably unsustainable; way beyoud her means the parameters of her small flat. Director Heather Young takes a gentle, unjudgemental approach, featuring a palette of muted almost monochrome tones, a slow pace with little dialogue – mostly of people talking down to Donna- which manages to paint an endearing portrait of a silent rebel who marches to the beat of her own drum. This incredibly charming yet undeniably sad debut by Young has proved to be a festival highlight

Turkish sci-fi In The Shadow predicts an ubiquitously grey and depressing world where humans are completely enslaved to A.I. Zait (Numan Acar) lives a laboriously hopeless existence forced to sift through stones in a mine, with his food portions and water supply under the control of inconspicuously big brother style machines. As Zait discovers a glitch in their surveillance, he sets off on a one-man rebellion, only to discover emptiness behind the microchips and cables. There’s a Terry Gilliam’s’ Brazil vibe to this future realm, but less frenetic and none of the humour. It’s a much more serious offering, which sacrifices plot in a bid to put forward already established existential concepts.

Chino Moya’s Underdogs is another bleak if more stylish proposition of a dystopian, Soviet looking world in decline. It’s told through a series of interconnected stories accompanied by a synth heavy, often jarring, score by Wojciech Golczewski conducive to a surreal viewing experience. Its drabness and faded grandeur is aesthetically akin to filmmakers such as Peter Strickland as well that stakness of the concentration camps in Alejandro Cuaron’s Children of Men. Each story is solid own its own, forebodingly captivating, with humorous undertones and filled with unlikeable chacracters that deservedly find a miserable ending.

POLYSTYRENE: I Am A Cliché

A delicate documentary that contrasts the anarchic quality of punk, as it turns its attention on one of the scenes female figureheads, Polystyrene (real name Marianne Joan-Elliot Said). A celebrated singer, whose fame and notoriety in 70s band Xray Specs and her own solo career, had the adverse effect of exasperating deep psychological issues. Its a retrospective of her life, curated by her daughter Celeste Bell (also one of the filmmakers) featuring talking heads of other family members, friends and industry figures. Polystyrene was a fashion icon and trailblazer not only for being one of the few females but also person of colour in a very white punk scene. It’s mostly through Bell’s detailing of her fluctuating relationship with Polystyrene that we get the essence of a tragic figure, as she denotes her experiences of neglect, illness but also her mother’s boundless creativity and unconditional love.

An enjoyable love letter of sorts, this Dogwoof documentary pieces together the relationship trajectory between two of the last century’s literary giants, Truman Capote and Tennessee Williams. Its all visualized through TV interviews, celluloid and theatrical interpretations of their work, as well as diary entries and letters (voiced by Jim Parsons and Zachary Quinto). It starts off rather slow but as it unveils itself, montage upon montage interwoven together seamlessly, a more nuanced and less affectatious characterisations surface. Revealing personal battles with addictions, their homosexuality and a restlessness around their writing and careers. Although they both claim to have never been romantically involved, there is a slight suggestion that perhaps there was some form of deeper attachment.