'You are up there with the best. Mike Leigh, Ken Loach, eat your hearts out"

by Joseph Connor
in Film 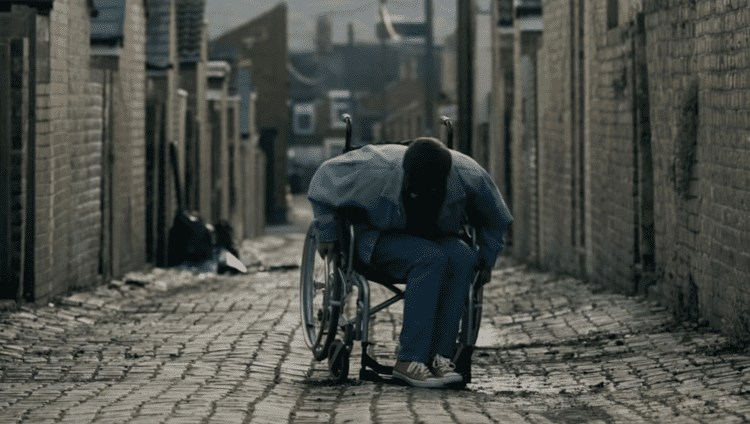 GIVE THEM WINGS a feature film written by Darlington based Paul Hodgson, will premiere at the Vue Cinema in Paul’s home town Darlington where the movie was set and shot on Saturday 16th July.

It also has its London Leicester Square premiere on Thursday the 28th of July.

Both premieres will be run in partnership with Meningitis Now, raising money and awareness for the charity.

GIVE THEM WINGS is released on all major platforms on the 1st of August 2022 in the UK, with US and worldwide dates to follow.

The film, directed by Sean Cronin, celebrates the life of disabled Darlington F C. fan Paul Hodgson. The film is an adaptation of the 2000 autobiography FLIPPER’S SIDE.

Paul was diagnosed with childhood meningitis aged just ten months old and his parents were told he would never move or speak. Paul, now 57 years old, has survived to become an award-winning novelist, film producer, and screenwriter. GIVE THEM WINGS is Paul’s incredible journey to acceptance.

The film, set in a much less tolerant 1989, tells the story of Paul’s heart-breaking journey to acceptance and follows in the footsteps of ‘My Left Foot’, ‘Billy Elliot’ and the beautiful French film ‘Untouchable’.

Sean Cronin said, GIVE THEM WINGS is a hugely important film that tackles discrimination of the disabled and turns it on its head, a film that teaches mankind that we must accept people for ‘who they are’ and not what they ‘appear to be’.

Ian Carter, Producer on the film and lifelong friend of Paul added “The determination shown by Paul to get this film over the line is encapsulated in the film; it is an emotional rollercoaster with timely injections of humour”.

Paul adds, “These premieres are the culmination of twenty years work and it will be great to have several of the cast and investors (without whom getting to this stage wouldn’t have been possible) there to enjoy this very special moment”.

Here are a few kind words from Nigel Daly after he watched the film. Nigel is currently the president of Screen International North America and was the chairman of BAFTA LA for ten years; here’s what he said:

“Well bloody done, what a great job!  Beautifully shot, totally immersed in the world from a design perspective but what smacks you between the eyes are the performances. Incredible. Toyah is sublime, the son exquisite and their painful relationship with the father is heart-wrenching.You should feel very proud… You are up there with the best. Mike Leigh, Ken Loach, eat your hearts out”

‘Give Them Wings’ OFFICIAL trailer 2022