By Wyndham Hacket Pain With a McDonald’s seemingly in every town centre and motorway service centre in the world it’s hard to imagine a time before the fast-food chain. Whether in the small island of Réunion off Madagascar or the Negev Desert in Israel you know the familiar burger and fries is never too far […] 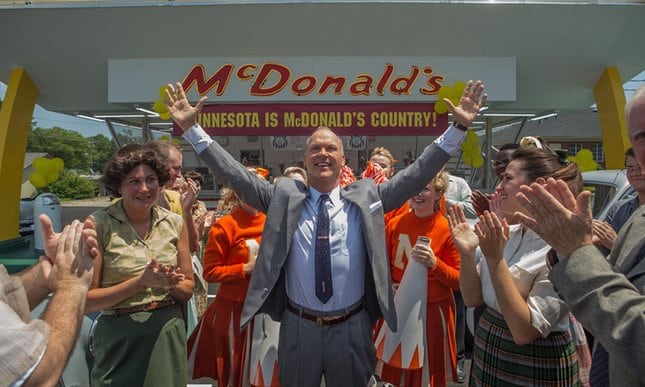 With a McDonald’s seemingly in every town centre and motorway service centre in the world it’s hard to imagine a time before the fast-food chain. Whether in the small island of Réunion off Madagascar or the Negev Desert in Israel you know the familiar burger and fries is never too far away. Over the last 60 years, McDonald’s has not just become one the world’s most recognisable and ironic products, but has also come to feed one per cent of people in the world every day. It therefore comes at a bit of a surprise that a biopic about the man behind one of the world’s largest companies hasn’t been made before and that it has taken so long for the story to make its way to the screen.

The Founder tells the story of Ray Kroc, a hardworking Illinois salesman whose idea it is to franchise and expand a single restaurant run by McDonald brothers Dick and Mac into the ubiquitous brand that we see today. The plot holds no major revelations or turns but is told in engaging enough fashion to keep the audience entertained for its duration. It is very general depiction of the events surroundings the restaurant’s growth and the film is very much a popularised account of proceedings rather than a factual historical document.

Michael Keaton, who plays Ray Kroc, puts in another solid post-Bridman performance in his depiction of the McDonald’s developer. Nick Offerman delivers an expectedly sound comic display as Dick McDonald and John Carroll Lynch is on hand as brother and McDonald’s co-founder Mac McDonald to create a rather amusing double act. The script is a lot funnier than I initially expected and could legitimately be seen as a comedy. Laura Dern is as dependable as you’d expect as the wife of Ray Kroc, even if the marital neglect she experiences is not explored as much as it could have been. Her role ultimately feels underused in a film where she is present within many of the most heartfelt moments.

Director John Lee Hancock, who has previously brought us the crowd-pleasers Saving Mr. Banks and The Blind Side, appears to be very comfortable with the material at hand and seems to have a feel for proceedings. The direction never feels forced or intrusive, with the set design and cinematography making the 1960s setting feel authentic and believable.

It’s hard to separate The Founder from its setting and its surroundings. “It sounds like America,” Ray Kroc says when asked what attracted him to McDonald’s in the first place. This sense of Americanism and the post-war boom that saw the United States become the dominant political and cultural global superpower is at the heart of the story. At times events on screen almost feel like behind the scenes footage from films of the era like American Graffiti, set in the drive-in diners of 1960’s California.

There is, however, no real sense that The Founder is trying to debunk the romanticised myths these now classic films created. There are glimmers of satirical edge but the broken promises, tensions, and lies at the centre of McDonald’s growth, as well as the American capitalist and consumerist dream that it represents, could have been delved into with a lot more bite. Ray Kroc’s story is not told as a modern parable of greed induced alienation but instead one of a man whose determination and perseverance drove him to success. Ultimately, John Lee Hancock’s film is one that aims to please rather than provoke.

In the end The Founder remains an enjoyable and entertaining experience, even if it is not the satirical critique of consumerism and American global growth that it perhaps could have been. The film might be seen as a bit of a missed opportunity but I was left feeling satisfied by the two hours I’d spend in agreeable surroundings and with the charming characters that are presented. The Founder will not go down a great film but is a pleasure while it lasts.

The Founder is on general release from Friday 17th February.