By Michael McNulty Bronco Bullfrog was the first of only three features directed by Barney Platts-Mills. He was 25 and working with a group of largely non-professional actors, some of whom were sourced from Joan Littlewood’s Theatre Workshop. Produced on a modest budget of £ 18,000, the film featured at Cannes as part of the […] 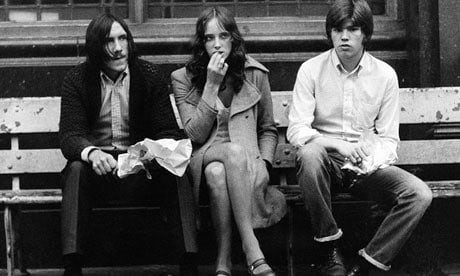 Bronco Bullfrog was the first of only three features directed by Barney Platts-Mills. He was 25 and working with a group of largely non-professional actors, some of whom were sourced from Joan Littlewood’s Theatre Workshop. Produced on a modest budget of £ 18,000, the film featured at Cannes as part of the parallel competitive section, Semaine de la Critique, where it picked up rave reviews. However, its distributors were unsure how to handle the film and it was put aside where it slowly faded into anonymity only resurfacing, in large part thanks to the BFI, in the early 2000s.

A simple story centred on Del (Del Walker), a 17 year old welders apprentice, and his friends, a group of rough and tumble East-London teenagers. Del falls in love with 15 year old Irene (Anne Gooding) and neither set of parents approve of their union, he’s too old, she’s too young, and he’ll lead her to drugs. So, in need of cash and wanting to find a space for themselves away from the disapproving eyes of their parents, Del endeavours to knock off a goods train with Jo (Sam Shepherd), aka Bronco Bullfrog, a recent borstal resident with all the enterprising spirit of an opportunistic go-getter just trying to get by in a world that’s he’s slowly closing in on himself.

The plot is wafer thin and it’s rough around the edges, but this only compliments the films overall aesthetic. Set in East London, most of Bronco Bullfrog was shot in Stratford. It’s a look at part of a changing post-war world and an early insight into emerging Suedehead culture. Bronco Bullfrog is about a time and a space and the people and their feelings who inhabit both. It’s a world of empty lots, tower blocks, rail yards and breakfast cafes, populated by a disenchanted youth who resort to yobbery and petty crime. Its natural and authentic British neo-realism that’s observational, distilling the texture of East-London life at a specific time and the growing sense of teen alienation and ennui.

The film bursts with a very real sense of desperation. Del, with Irene riding aback of him, motors from place to place franticly searching for an escape. The two are caught in a world in which they are fated to become all that they are running from and yet they are not ready to resign themselves to that truth. Bronco Bullfrog is a must-see.