By Wyndham Hacket Pain Set in the ‘Vegas of the North’, Away follows Ria (Juno Temple) and Joseph (Timothy Spall) who have both escaped to Blackpool in an attempt to distance themselves from the problems in their lives. Ria is hiding from her abusive boyfriend, while Joseph is trying to cope with the death of […] 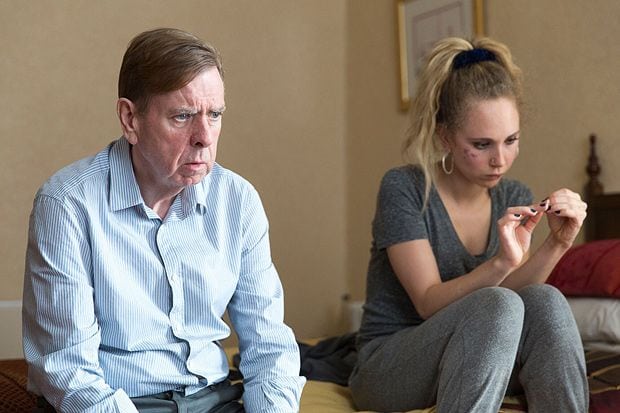 Set in the ‘Vegas of the North’, Away follows Ria (Juno Temple) and Joseph (Timothy Spall) who have both escaped to Blackpool in an attempt to distance themselves from the problems in their lives. Ria is hiding from her abusive boyfriend, while Joseph is trying to cope with the death of his wife, and as the story progresses they form an unlikely friendship.

The film is told in a split time frame in a poor attempt to make events seem more interesting than they really are. Despite having a good cast repeated scenes struggle to be engaging. Timothy Spall may be one of Britain’s most loved actors but his performance here is monotonal and never more than a drab stereotype of a grumpy middle aged man. In a different scenario a role like this could have been interesting. The part Spall plays in Mike Leigh’s All or Nothing is not too dissimilar and was the basis for a thoughtful and emotionally engaging film. Juno Temple’s role suffers from similar issues. Her character is an unimaginative and clichéd portrait of a troubled woman from a poor background that could fit into any soap opera.

It doesn’t help when the script is as poorly written as this one. Spall has far too many memorable roles to his name for me to think that he is to blame. The dialogue is disjoined and awkward at best, while shallow and insincere at its worst. On the rare occasion an interesting conversation develops there is an unnecessary or abrupt diversion onto a completely unrelated topic. When issues as important and serious as suicide, loss, and grief are covered they deserve to be treated with respect and care.

Too often the film plays for laughs at what are meant to be its most poignant moments, giving the sense that those involved aren’t serious about the topics they are trying to explore. It’s hard not to be annoyed when a film presents itself as deep and thoughtful but then cannot even discuss its themes with a straight face. These moments might be forgivable if they were actually funny but they are about as successful as anything else in this film. The only times Away gets close to being funny is when the acting and dialogue become painfully mawkish and badly worded.

The only positive to be found in this otherwise worthless film is that there is some pleasant cinematography. Watching this film would have been a more enjoyable experience if it was silent, without the dreary conversations and unsubtle choices of music.

Away might be poorly written, badly acted, and insincere but worst of all it is dull and boring. Aside from the odd pretty shot there is very little worth watching in this shallow and misguided feature.

Away is on general release from Friday May 12th.