If you had been watching films as they were released in 1993, there must have been a fairly jarring moment when, within days of each other, The Sandlot and This Boy’s Life were released. As we discussed last week, The Sandlot idealises and romanticises growing up in the America of the early 60s. It’s about […]

If you had been watching films as they were released in 1993, there must have been a fairly jarring moment when, within days of each other, The Sandlot and This Boy’s Life were released. As we discussed last week, The Sandlot idealises and romanticises growing up in the America of the early 60s. It’s about growing up over a summer, building a group of friends and overcoming some of the common challenges of being a kid. The subject matter of This Boy’s Life shares a few things with The Sandlot. In both films the main character has a new stepfather he is struggling to adjust to and get along with. Of course, The Sandlot is sunshiney, rose tinted fiction. This Boy’s Life is tough, grey, reality.

Based on Tobias Wolff’s memoir, the film focuses on Wolff (Leonardo DiCaprio) between the ages of 13 and 15. We first find him and his mother Caroline (Ellen Barkin) in Salt Lake City, escaping her violent boyfriend (a small role for Chris Cooper). When that doesn’t work out they move to Seattle where Caroline meets Dwight (Robert DeNiro). He seems like a nice guy, but when Tobias – who likes to be called Jack – goes to stay with Dwight and his family for a while, the potential stepfather’s true colours come out. Once Dwight and Caroline are married the move to Dwight’s house in Concrete, Washington becomes permanent and under the guise of ‘straightening out’ the often in trouble Jack, Dwight becomes ever increasingly verbally, emotionally and physically abusive. 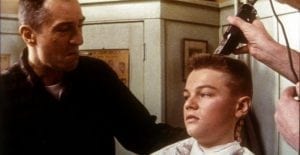 Today, Leonardo DiCaprio is one of the biggest names in film. He’s been respected in the business for a quarter of a century, forged a longstanding collaboration with Martin Scorsese and won an Oscar. In 1993 he was the kid from Critters 3. This Boy’s Life and the role of Jack offered a fantastic launchpad for any young actor: a character in every scene of the film, dramatic scenes to get your teeth into and the chance to spar with Robert DeNiro. It remains some of DiCaprio’s best work.

Storytelling, at a basic level, is about progression. This is especially true in coming of age narratives, because at that point in our lives we’re changing daily. This is something that This Boy’s Life does brilliantly. Through DiCaprio, Jack grows and changes before our eyes, but what’s just as impressive is the way that both the screenplay and the performance show him resisting this growth. What’s interesting about the dynamic between Jack and Dwight is that Jack— who shoplifts, vandalises cars, gets in fights and does other stupid teenage things— does need to change. In fact, we see a lot of the time that Jack wants to change, several times he tells his mother he doesn’t know why he behaves the way he does, but Dwight makes him resist this impulse. Even as he grows up, the process is stunted by resentment, by Jack’s desire to not let Dwight win, to not give him evidence that his abusive approach is working.

Jack is pulled in so many directions: his friends are as rebellious as he is, but he’s got the nous to recognise that they’re probably going to be stuck in a rut in Concrete after they graduate, and that he wants to escape the place. He despises Dwight, but he can see the constant abuse of his home life beginning to rub off on him. This all comes into focus in a relatively small storyline in which Jack, after initially fighting with him, befriends Arthur (Jonah Blechman) a gay boy from his class. To begin with Jack is happy to throw out ‘homo’ as a slur. Later, when Arthur kisses him on the cheek, you brace yourself for the punch. It doesn’t come, instead Jack just doesn’t comment and goes back to playing the piano with Arthur. Later still, with Dwight rubbing off on him, Jack will turn back to the slurs when Arthur won’t do him a favour. It’s just one way that Jack’s two steps forward one step back approach to becoming more mature shows itself.

These days, you can find Robert DeNiro slumming it in direct to DVD cheapies opposite 50 Cent, but in 1993 he was still in that sustained period of incredible work that allows us to forget the like of Dirty Grandpa or Hide and Seek and remember that he’s one of the greatest actors ever to appear on camera. This, his second release of the year, finds DeNiro on firmer ground than Mad Dog and Glory did. He’s effortlessly brilliant as Dwight. From the way he just allows little chinks of the real guy to show through when he’s first dating Caroline, to the ways he justifies his growing abusive behaviour, down to the pathetic rage of the film’s final scenes, DeNiro crafts a compelling portrait of a banal monster. There is a mass of detail in what DeNiro is doing here, little moments add up: consider how Dwight’s self-regard, his preening in his brand new Scout uniform, while Jack has to make do with an ill-fitting second hand one, tracks right through to the climactic whine of “What about me?”

There is a sense of two actors enjoying sparring with one another in DeNiro and DiCaprio’s scenes together. At times there’s a sense that each is trying to get a rise out of the other, and this plays brilliantly into the dynamic between Dwight and Jack, bring the best out of DiCaprio in particular. We feel it viscerally in moments like the one where Dwight is teaching Jack how to fight. You can feel them challenging each other, just as Dwight is challenging Jack (though within the film it’s an unfair challenge). In that scene, Dwight wins, but we see the dynamic flipped later, when Jack is talking to a recruiter from a private school, Dwight walks up and tries to undermine him. When he walks away, Jack explains Dwight as “just a mechanic who did some bad work on our car”. It’s another sign of Jack’s maturation; he no longer wants to use his fists to win fights with Dwight.

Next to these two performances, Ellen Barkin is often left sitting on the sidelines, because Caroline’s strategy is simply not to get involved. Still, she’s excellent. We watch her get beaten down by Dwight. Early on she’s a confident woman, she enters a shooting contest in Concrete and beats Dwight and the other men at their own game, but soon she’s deliberately not involving herself even as Dwight’s abusive tendencies worsen. Barkin doesn’t have a lot of time to sell this progression, but you understand and believe the journey both through her performance and through DeNiro’s, because you believe that all Caroline is trying to do is, as far as she can, deprive Dwight of the petty excuses he uses to abuse her. 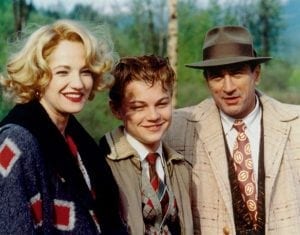 Director Michael Caton-Jones came to this film after his American debut Doc Hollywood, a much more whimsical slice of small town Americana. He gives Concrete a muted look reflective of its name, especially compared to the more vibrant cities that Caroline and Jack move to in the beginning. Caton-Jones and his crew have to be especially congratulated for their casting. In addition to DiCaprio there is a wealth of relatively inexperienced talent on show here; a debuting Tobey Maguire (who also auditioned to play Jack), Chris Cooper in an impactful cameo and, as Dwight’s daughters, early roles for Eliza Dushku and Carla Gugino. The whole ensemble is excellent and the scenes in Concrete in particular have a sense of community, with all the good and bad aspects that entails.

This Boy’s Life is a tough, harsh film, but it’s full of hope. It’s coming of age cinema in the truest sense. We can always see, thanks to DiCaprio’s performance and the beautifully written narration taken from Wolff’s book, that there is more to Jack than the ill-disciplined tearaway he is at many points of the film. As the film ends we see Jack, free, walking away, captions let us know that things worked out for him and Caroline, and for Dwight’s kids, in the end. Ultimately, the film ends up being about saving yourself, not in a single moment, but just by moving forward, even if it’s difficult.