Last week I talked about Jurassic Park and how, at 11, it felt like my movie. Sleepless in Seattle isn’t that. It’s my mum’s movie. I honestly don’t know where I got the movie bug, none of my family are cinephiles. My parents, generally speaking, like their movies safe. I used to have to assure […] 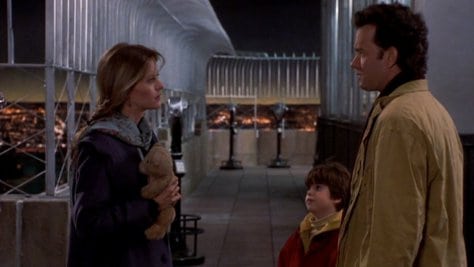 Last week I talked about Jurassic Park and how, at 11, it felt like my movie. Sleepless in Seattle isn’t that. It’s my mum’s movie. I honestly don’t know where I got the movie bug, none of my family are cinephiles. My parents, generally speaking, like their movies safe. I used to have to assure my mother that a film would have a happy ending if there was even the tiniest bit of suspense during it. My folks are great, but it’s safe to say we don’t look at movies the same way.

Going into the rewatch for this piece, it’s probably been over 20 years since I saw Sleepless in Seattle, and back then, while I understood who the audience was (Mum) and why they liked it (it was well crafted, and nice) at 16 I found it too schmaltzy by half for my tastes. At 36, this still isn’t a movie for me, but I can appreciate it on a few more levels than before.

After his wife dies at a tragically early age Sam (Tom Hanks) and his eight year old son Jonah (Ross Malinger) move to Seattle for a fresh start. One night, worried about his Dad, Jonah calls a radio show saying that Sam needs to find a new wife. Across the country, Annie (Meg Ryan), who is about to marry her decent but dull boyfriend Walter (Bill Pullman) can’t stop thinking about the man the radio host calls ‘Sleepless in Seattle’ and when she writes to him, suggesting they meet at the top of the Empire State Building on Valentine’s day, Jonah thinks he’s found the right woman for his father.

Sleepless in Seattle is a film specifically of its time and a film that looks back wistfully in an attempt to echo a bygone era of cinema. It looks to the way that movie couples are drawn together despite the odds and wishes it could see that kind of destined romance rather than the dating scene of the 90s. Specifically, it references the Cary Grant, Deborah Kerr romance An Affair To Remember, positing Sam and Annie as the star crossed lovers of that movie and having several scenes deliberately echo the film, as well as showing characters watching it. The film, in this respect, has its cake and eats it; pointing out the unlikeliness of cinematic romantic fantasy even as it indulges in it.

Looking at the film today, I find myself much more able to relate to Sam – not that I have, or indeed had, a wife or a kid – but being almost exactly the age of the character, I am now much more able to imagine myself in his shoes. This definitely allows me to appreciate Tom Hanks’ performance more than I did previously. Moments I might previously have rolled my eyes at played more affectingly this time, most notably the call to the radio station. Hanks pitches his performance perfectly in this sequence, from good natured annoyance that his son has put him up to this to, when he engages with the moment, beautifully and subtly articulated emotion. There is a particular raw quality in his voice when Sam is asked what he loved about his wife and says “how long is your show?” that rings completely true. Hanks is excellent throughout, whether playing Sam amused when he finds his son with his first girlfriend (Gaby Hoffman) or the mix of concern, relief and anger when he finds Jonah at the Empire State Building. The only thing that sticks out as a slightly false note is equating Hanks with a Cary Grant role, when he’s so obviously Jimmy Stewart (whose role he would inherit in his next role with Meg Ryan and director Nora Ephron).

While it has sitcom moments like Hanks and Rob Reiner’s (now somewhat cringe inducing) discussion of dating in the 90s, Sam’s side of the film feels pretty grounded, to me Annie’s (Meg Ryan) plays much more scripted. Ephron is clearly trying to capture a screwball tone with the dialogue, particularly at the dinner where Annie’s family meet Walter and in the scenes with Rosie O’Donnell as her boss and it doesn’t always work. Ryan is ditsily charming, as ever, but even though it’s clear she’s going to end up leaving Walter – a beige suit that got its wish to be a real boy – I never bought into the idea she’d be with him in the first place, and because that relationship never convinces there are no stakes to that element of the story. What does work, despite my cynicism and despite some behaviour on Annie’s part that, were the character male, I suspect we’d find more troubling, is the sense of the instant connection that Annie feels to Sam. Ryan is very good playing the layers of this woman is she tries over and over to convince herself that that the sensible thing – marrying Walter – is also the right thing, despite the pull she feels towards Sam.

There are things that clunk for me in the difference in tone between the two stories, but the drama of Sam’s does prick at the tear ducts and the comedy of Annie’s sometimes strikes the funnybone. Taken as a fairy tale and as a tribute to our collective wish to believe in the grand romance of Hollywood storytelling, I get why people love Sleepless in Seattle. Ephron gives the film a classical feel without making it seem dated (looked at from the 90s anyway, obviously technology has made it feel antiquated since). Hanks and Ryan have a chemistry so palpable that it works even though they only share two minutes on screen, amazingly Ryan was at least the sixth actress offered the part, but I can’t imagine the connection feeling as instant or the idea that this relationship would live offscreen being as credible with anyone else.

Like I said, this isn’t my movie. I like to think I’m a romantic, but maybe just not in quite such a Hollywood way as this, but at least now I can appreciate Sleepless in Seattle for the impeccably crafted thing it is.