Hollywood has, from its very beginnings, been importing talent to serve both in front of and behind the cameras. John Woo had made his directorial debut in 1974 with the martial arts movie The Young Dragons (featuring action choreography by one Yuan Lung Chen, you may know him as Jackie Chan), but it was only […] 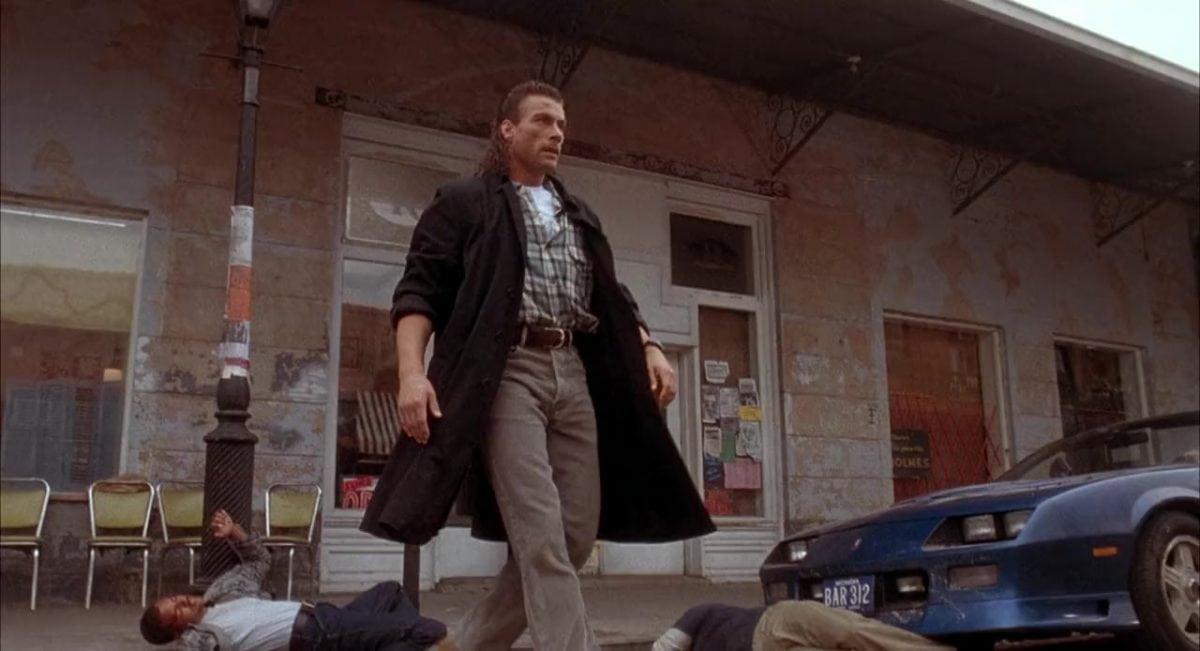 Hollywood has, from its very beginnings, been importing talent to serve both in front of and behind the cameras. John Woo had made his directorial debut in 1974 with the martial arts movie The Young Dragons (featuring action choreography by one Yuan Lung Chen, you may know him as Jackie Chan), but it was only with his 1986 film A Better Tomorrow that he came to greater international prominence. A Better Tomorrow was a film that cemented Woo’s personal style, which he would refine in further ‘Heroic Bloodshed’ films like The Killer (1989) and Hard Boiled (1992).

While in 1993 Woo had just arrived in the US and was making his first film in English (a language he had not mastered at the time) his Belgian star, Jean-Claude Van Damme, was a more established import, having first made an impact in 1986’ No Retreat, No Surrender and proved since that his limited acting ability would be no obstacle to a succession of increasingly high profile star vehicles.

Hard Target is a film that leans in to the strengths of its star and its director, largely treating as perfunctory the areas in which they both struggled. The plot is a simple riff on The Most Dangerous Game, with Lance Henriksen as an ‘entrepreneur’ who organises hunting parties in which, for the right price, clients can hunt and kill people. Nat (Yancy Butler) is in New Orleans looking for her father and after he saves her from a mugging, she hires Chance Boudreaux (Van Damme) to help her. They discover her Dad was one of Henriksen’s targets, but now that he’s on to them, Chance is next to be hunted.

We’ve put it off too long. We need to talk about the hair. I‘m not best placed to make fun of anyone’s hair, but Woo and Van Damme make it so easy here. 90’s cinema brought us plenty of hairstyle disasters (consider Nicolas Cage’s iconically awful Con Air look), but I’m not sure any was more ludicrous or more lovingly filmed than Van Damme’s hilarious wet look mullet. Woo, never shy of slow motion, glories in it, making sure we notice its dynamics as Van Damme kicks bad guys, dives out of the way of explosions and jumps over flaming barrels. In a way it’s a good signifier of the film itself – Woo clearly knows it’s silly, but he’s enjoying it.

Happily, Hard Target has much to recommend it beyond Van Damme’s barber’s questionable judgement. Lance Henriksen is clearly having a great time chomping scenery as chief bad guy Emil Fouchon. He’s appropriately bastardly and has a solid, largely improvised, back and forth with Arnold Vosloo (Imhotep from the 90s/00s Mummy series) as his henchman in chief. Woo also gives Henriksen a weapon that is instantly recognisable – a single shot pistol. Henriksen takes that prop and uses it in a way that feels connected to the rest of his performance; there is something that feels particularly ruthless about this weapon because every shot is methodical – ritualistic even – and has to be thought out and specifically targeted because the shots one has limited in both number and speed. This also gives an interesting dynamic to the final confrontation with the frighteningly fast Van Damme. This all comes through in the rest of Henriksen’s performance, in Fouchon’s survival of the fittest philosophy, but also in that he does, at least until up against Van Damme, give his prey a fighting chance.

The key to Hard Target is the melding of Van Damme’s style with John Woo’s. Woo is undoubtedly more famous for the gunplay action of his 80s and early 90s films, but he made several martial arts films in his time, and here he combines his experience of the latter with the style he developed in his heroic bloodshed work to great effect. The first fight scene is all but incidental: Van Damme saving Yancy Butler from guys who try to mug her, but it is lovingly stylised by Woo and executed with ruthless impact by Van Damme and the team led by stunt coordinator Billy Burton. The film feels like a great compromise between director and star. relationship was reportedly challenging, but the film represents both of them well, without either seeming to compromise their styles. Woo gets to throw all his trademarks in (doves, guns, a back to back shot that he would replicate in Face/Off, copious slow motion), as well as homages to his earlier films (that barrel jump nods to Bullet in the Head). The action is varied, with Woo largely allowing Van Damme to stick to the martial arts until the big action set piece of the film’s ending, which trades more heavily on images familiar from his best known Hong Kong work.

Jean Claude Van Damme had recently stretched his range playing twin brothers in Double Impact, but at this stage, he wasn’t so much an actor as a movie star. This is certainly reflected in the work that was done on Hard Target’s screenplay once he was attached, with the setting adjusted to New Orleans so that his heavy Belgian accent could be passed off as Cajun. He just about gets away with it – certainly more so than Wilford Brimley does as his Uncle. Chance isn’t much of a character, his motivation is simply to get the $217 he needs to get his union dues paid so he can ship out as a merchant seaman. That gossamer thin coating aside, he’s Van Damme with very hair. That said, Van Damme always had to back up his martial arts ability. Over the years, he has aged into a much more interesting actor (look at JCVD and the direct to video Universal Soldier films), but here he handles the functional dialogue simply. He’s good enough to drive the film forward, but his acting isn’t what we’re here for.

The rest of the acting: Yancy Butler as the woman Chance is helping (their romantic storyline was deleted), Kasi Lemmons as a detective, the aforementioned Wilford Brimley as Chance’s uncle, is equally functional. Nobody’s bad, but there also aren’t any standout performances. Unfortunately they don’t get into the thick of the action very much, so are often left simply to exposit and set up what Van Damme is going to do.

In several of these pieces I have discussed how the films look at the political realities of the early 90s, or how they are now reframed with 25 years’ distance and context. Hard Target isn’t like that, it’s a simple film, and I like it very much for that. It’s interesting and fun to break down layers of meaning that drive a film but equally I don’t mind, if not entirely switching it off, shifting my brain into low gear and revelling in the simple pleasures of some stylised action cinema. On that level, Hard Target delivers in spades. I’m deliberately not going into the details of the action sequences, because if you’ve not seen the film before or for a long time they are its most rewarding aspects. There are some interesting details from behind the scenes. The film was reshaped quite substantially in post-production and, years ago, Woo’s much longer workprint did sneak out on pirated VHS. I’ve not seen this version of the film, but I’d be interested if it could ever be sourced for a new blu ray. Some of the action was changed during production. Woo had planned a boat chase for the finale but, at Van Damme’s insistence, this was changed to a horseback chase. Woo used the ideas he had for the boat sequence in Face/Off, and the idea would also be used in Hard Target’s belated (and fun) Scott Adkins starring sequel.

This isn’t a great film, but it is a great showcase for its director and its star, and it actually remains my second favourite of Woo’s American films (behind, unfashionably, Broken Arrow) and it’s something I’m always happy to come back to and enjoy for exactly the unpretentious slice of silliness it is.