Time is strange. To me, 1993 doesn’t feel like it was that long ago. The films I’m watching for this series are often clearly from an era that has passed, but they don’t feel old to me. Until today. In many ways, Dave is the quaintest film I’ve seen for this project, the one most […] 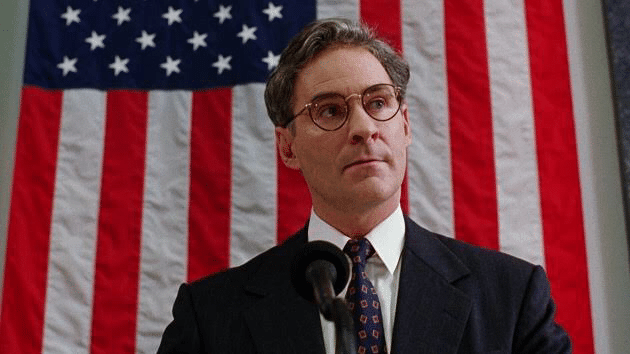 Time is strange. To me, 1993 doesn’t feel like it was that long ago. The films I’m watching for this series are often clearly from an era that has passed, but they don’t feel old to me. Until today. In many ways, Dave is the quaintest film I’ve seen for this project, the one most redolent of a bygone era, specifically because of how precisely certain details of it mirror what is happening in the world as I type this.

The contrivance of the story is simple enough; after the President of the United States (Kevin Kline) has a stroke while spending time with his mistress, the chief of staff (Frank Langella) doesn’t want to hand the job over to a vice president (Ben Kingsley) he sees as too liberal. Instead he installs Dave Kovic (also Kline), a lookalike who was doubling for the President while he was occupied. He plans to have the vice president mired in scandal, at which point Dave can nominate his replacement, before ‘having another stroke’. The plan goes awry when Dave turns out to not just be a nicer guy, but potentially a better president than the man he is subbing for.

Hollywood seems to have the sense that you can be a good politician just by being a decent guy (and, at least until recently, it was almost always a guy). Look at Jimmy Stewart – the quintessential decent everyman – in Mr Smith Goes To Washington, or Aaron Sorkin’s Presidents, Michael Douglas in The American President and Martin Sheen in The West Wing. They all have gravitas, but they are all united by the fact that their characters seem to be defined by an innate decency. Dave is another example of the decent everyman as a better leader than the practiced politician.

President Bill Mitchell is an asshole. The first time we see him he’s demanding the passage of a bill that, among other things, will withdraw $650 million funding for homeless shelters, a pet project of his wife, Ellen (Sigourney Weaver), who hates him, but keeps up appearances in public. The next thing he does is go off to have sex with his mistress (a young Laura Linney). Dave Kovic, on the other hand, is an aw shucks nice guy. He runs a temp agency and the first thing we see him do is talk his accountant friend (Charles Grodin) into hiring yet another secretary he doesn’t really need, just so she’ll be able to make ends meet. Dave brings the same approach to the presidency (try to overlook the fact that the fact he does what the transparently corrupt chief of staff asks of him in the first place somewhat undermines his otherwise morally upstanding character), muddling through with humour and kindness that prompts cameoing political commentators to suggest the President has had a personality transplant.

Kevin Kline can be brilliantly effective as a complete bastard (look at Otto in A Fish Called Wanda), but he’s perfectly cast as Dave. Kline plays the role as a nice, funny, guy driven by compassion and common sense. There are scenes that capture the more folksy side that people like leaders to be able to tap into (a factory visit where he uses a new machine to make a visual gag) and moments that show the sort of unforced empathy that you would hope powers any politician (the visit to a homeless shelter, where he waves the cameras away to talk to a little boy sitting alone). This side of the character also plays well as President Mitchell’s wife begins to warm to Dave. It’s sometimes forgotten, I think, that Sigourney Weaver has real comedic chops and they’re on effective display in a scene when Dave and Ellen leave the White House under cover and get pulled over by a cop.

For its first half the film engages only lightly with policy, but when Dave finds out about the cutting of the homeless shelters we get some of the film’s best moments, with Charles Grodin’s Murray helping Dave find $650 million cuts in the budget and Dave laying them out at a cabinet meeting. It’s a light approach to serious issues, but that’s what director Ivan Reitman is going for here. He moves the plot and characters along with a deft touch, while folding in some commentary that has shapeshifted somewhat over the past 25 years. It’s unlikely that the makers of Dave saw Bill Clinton coming as they were writing and making the film, but still, Dave has a similar appeal and ability to talk to the ‘average joe’ at their level.

What’s more interesting now is the corruption story towards the end of the film, which mirrors many of the things happening in the Trump administration right now. Dave is a fascinating watch in the era of Trump. In many ways it makes similar points to those made by people who are ‘sick of experts’. While it has faith that there are decent people in politics, Dave’s is clearly the political voice it identifies with – the non-political voice, the one that isn’t looking at demographic numbers to make policy. Trump’s election could be said to come from a hell dimension version of this idea, he sold himself as the non-politician who would shake things up, who would “drain the swamp” (spoilers: he lied). Dave, viewed 25 years on, depicts the anti Trump. It’s a film from a simpler time and in that way it was a genuinely lovely watch. Pretending for a couple of hours that politics could be more like this was quite soothing.