John McNaughton couldn’t have made a more auspicious debut film than he did with 1986’s Henry: Portrait Of A Serial Killer. An unforgiving, punishingly hopeless insight into the mind and crimes of a serial murderer, the film was well received at festivals in 1986 but struggled to find a distributor, apparently being passed around by […]

John McNaughton couldn’t have made a more auspicious debut film than he did with 1986’s Henry: Portrait Of A Serial Killer. An unforgiving, punishingly hopeless insight into the mind and crimes of a serial murderer, the film was well received at festivals in 1986 but struggled to find a distributor, apparently being passed around by industry figures on VHS until it finally found a release in 1990. I hadn’t even heard of his follow up film, a sci-fi called The Borrower, until researching this piece, but even taking that into consideration, Mad Dog And Glory seems like an odd turn for McNaughton to take as a filmmaker, in fact, it’s rather an odd film on the whole.

Robert De Niro plays a meek New York detective named Wayne Dobie, ironically nicknamed ‘Mad Dog’ by his workmates. One night he saves mobster Frank Milo (Bill Murray) from a gunman. As a thank you present for Wayne, Milo sends Glory (Uma Thurman), who has been instructed to be Wayne’s friend for a week.

If you’ve not seen or heard of this film before you might look at that synopsis and think I’ve transposed De Niro and Murray’s names. Surely Bill Murray is the lonely sad sack detective and De Niro is the mobster who does stand up comedy on the side. That would be the more predictable casting, and that’s both the central strength and the central weakness of Mad Dog And Glory. It’s often welcome to see actors playing against type, and with Murray fresh from Groundhog Day and De Niro’s highest-profile recent role having been Max Cady in Scorsese’s Cape Fear remake, both are certainly doing that here. On the other hand, there’s often a reason actors, even great actors, have a ‘type’ to begin with.

Of course, this was 1993, so Robert De Niro was still Robert De Niro, it would only be around the beginning of the 21st century that he would appear to be replaced by a less talented doppelganger. He’s good as Wayne, we get a picture of him as a small and lonely man who has fallen into work he does well, but never achieved his ambitions (he displays his crime scene photos in his apartment, but clearly longs to be an artist). It’s hard to fault the performance, but still, De Niro seems miscast; a square peg in a round hole and that feeling is only exacerbated by the presence of Bill Murray. 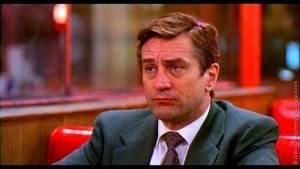 Again, it’s not that McNaughton didn’t cast a talented actor here, as well as being a brilliant comedian, Murray has shown that he’s got dramatic chops, but it’s a question of how they are used. For instance, Murray works as a lonely actor, adrift in Tokyo, finding his spirits lifted by Scarlett Johansson in Lost In Translation, or in any number of eccentric roles for Wes Anderson. What he can’t do is intimidating. When he’s being the friendly gangster, chatting with Wayner or telling (corny) jokes with the cops, Murray is fine, but it’s when Frank has to be threatening, particularly towards the end of the film, that he seems out of sorts. De Niro was actually offered the part of Frank Milo but insisted on playing Wayne instead. You can see why he and Murray both wanted to do something against audience expectations, but in watching the film you never quite shake the feeling that they’ve accidentally picked up each other’s script pages and just decided to run with it.

This feeling of not quite hitting the tone extends to the whole film. Novelist Richard Price provides a screenplay with some sharp dialogue, but never finds the balance between the film’s crime story, the romance between Wayne and Glory and the comedy. You can buy into Wayne falling for Glory, what lonely guy in his position wouldn’t fall for a 22-year-old Uma Thurman? The comedy is the main stumbling block here, as it seems that Price and McNaughton are never quite sure if they’re trying to make us laugh. Again, it’s probably a function of the (mis)casting, but it feels like the film should be funnier, especially when Murray is on screen because the tough guy act is so obviously an act on him. Murray could probably have made a lot of comedic hay with this, but the script doesn’t give him the resources and Frank’s stand up is intentionally bad, so he and the film seem a bit lost. The same issues dog the crime story. I could buy perennial ‘oh, THAT guy’ and underrated character actor Mike Starr as Frank, he has both the innate toughness and the humour to pull it off, but instead he’s here as Frank’s muscle (Wayne’s ‘muscle’, his partner at work, is played by a bafflingly cast David Caruso). It’s never convincing that Starr’s character would be subordinate to Frank, and again this contributes to the whole film feeling somehow off.

Where the film does work is in the scenes between De Niro and Uma Thurman. As Glory, Thurman’s is initially a decorative role, she’s been sent as a present to Wayne and though he’s initially uncomfortable with it, it’s clear what Frank means by that, and that if he discovers that Glory hasn’t followed through on the deal, he’ll be upset. Thurman layers this into her performance. When she’s trying to be friendly with Wayne, and later when she succeeds in taking things further, there’s always a discomfort about her. She’s playing the role capably, drawing Wayne in, being charming and sweet, and eventually quite blunt, but Thurman’s performance shows us that it’s largely an act. The romantic and sex scenes are, for this reason, some of the most uncomfortable in the film. De Niro plays on Wayne’s lack of, at least recent, experience while Thurman plays Glory as simply trying to do the job Frank has given her while being visibly uncomfortable. These scenes aren’t especially pleasant to watch, but they are effective. 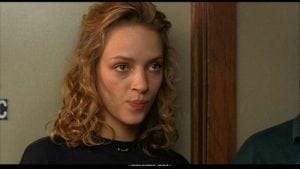 What’s interesting is that Thurman doesn’t choose to play Glory as some sort of arch manipulator. Glory was apparently initially a very different character: more mercenary, nakedly and calculatingly using Wayne for her own ends. This was changed in reshoots because audiences found her unsympathetic. That’s no bad thing in a character, but in some ways I think this makes Glory more interesting. Yes, it plays up her victim status, but Thurman’s not simply playing the cliche hooker with a heart of gold and we’ve seen this role played tough, cynical and manipulative many times before. The dynamic is especially interesting when Wayne falls for Glory. He tells Frank that ‘they’ are in love, but does he ever believe that? Thurman’s performance gives him little, if any, reason to, but De Niro doesn’t quite tip his hand.

Mad Dog and Glory is far from the best work of anyone involved. It’s a weird little mess of a film. That may be down to the initial creative decisions, the script that never quite finds a consistent tone, the casting that seems like novelty for novelty’s sake. It may also be partly the fault of the reshoots, which changed the fight scene at the end of the film, as well as Glory’s character. McNaughton gets good work from De Niro and Thurman, as well as supporting players like Mike Starr, Kathy Baker, and Tom Towles, but struggles to impose a consistent tone. I wonder if the reshoots were initially trying to shift the Wayne and Glory scenes to something closer to romantic comedy, which doesn’t mesh visually with what begins as a fairly gritty looking crime story. It’s striking that some of the most memorable images here are Wayne’s crime scene photos, which look like deleted images from the opening sequence of Henry (after the MPAA went through to sanitise it). People are trying to pull this movie in several different directions at once and ultimately nobody ever quite wins, so this is what we end up with. On the whole, Mad Dog And Glory a mish-mash of bits that work and bits that don’t, but it’s seldom less than interesting as it tries to decide what movie it wants to be.