The days are growing shorter, the nights are drawing in, and the temperature is plummeting. Horror films are an acquired taste, some people love them and some people despise them. I am firmly in the former camp, and happy to be a fully-fledged, card-holding horror fan. This list looks at what I consider to be […] 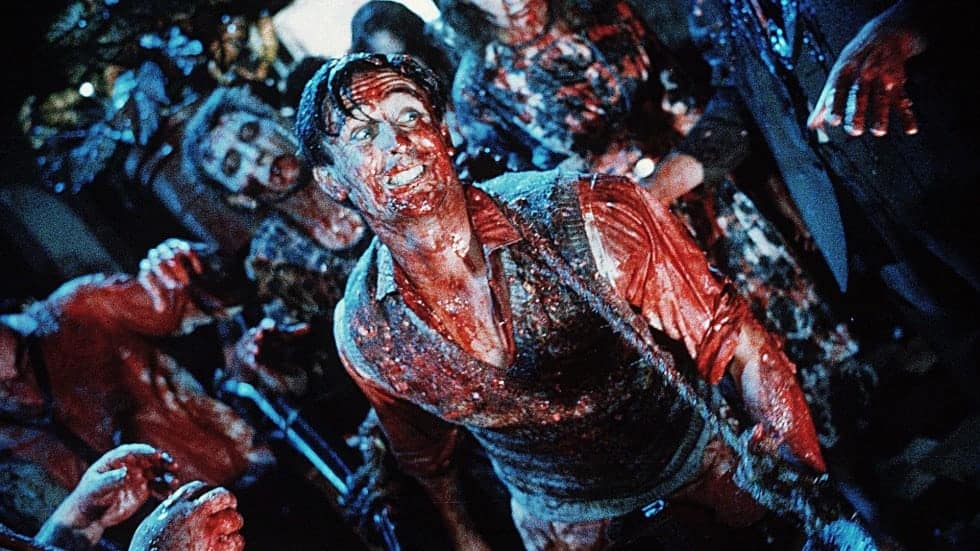 The days are growing shorter, the nights are drawing in, and the temperature is plummeting. Horror films are an acquired taste, some people love them and some people despise them. I am firmly in the former camp, and happy to be a fully-fledged, card-holding horror fan. This list looks at what I consider to be my favourite horror films of all time, perfect a chilly winter’s night. Of course, as with any Top 5 list it is subjective: I am a fan of disturbing, gory horror films so this list primarily focuses on this particular variety, with Wes Craven and Takeshi Miike getting honourable mentions.

Enjoy, if you dare…

Before he played around with Orcs, Hobbits and a gigantic Ape, Peter Jackson spent his time creating cult classic horror films such as Bad Taste and Braindead. As you may have guessed, Braindead is a zombie flick, Jackson allowing the film to be a full throttle nightmare, with Roger Ebert calling it, “one of the most disgusting horror films ever made”.

The film opens with the protagonist escaping from the natives of Skull Island, whilst unwittingly taking a mysterious creature – that the natives dread – with him hidden in a wooden crate. The creature then proceeds to bite the protagonist. In an attempt to stop the infection, the protagonist’s hand is cut off with a machete. The infection is noticed to have spread elsewhere and well, you can guess what happens next.

This level of gore is the tip of the iceberg in Braindead, which has helped encapsulate its infamous status as a truly disgusting horror film. There are moments that are gruesome, that make you cringe and wince, but nevertheless when you realise that the film is a black comedy that has been rocketed up to eleven, the laughs do come and the film ends up being a disgusting, gleeful romp.

Director Takashi Miike is known for making idiosyncratic films, and Ichi the Killer is no different. The film is packed of visceral sequences of blood-splattering violence, long before Saw came along and glamourised torture porn. Ichi the Killer is an ultra-violent film set in a particularly seedy underworld in Japan. The high level of gore stems from Ichi and a supporting cast of killers, creating a level of torture that feels like an assault to the eyeballs; particularly during the hook hanging sequence. Like Old Boy, the film is based off of a Japanese manga, but delivers a much more visual experience than could ever be delivered on paper, with Ichi being transfixed on inflicting pain that sees the film descend into a bloodbath of epic proportions.

Wes Craven created The Last House on the Left as a film that was inspired by Ingmar Bergman’s The Virgin Spring. A classic example of exploitation horror, it picked up its notorious reputation for the rape/torture sequences evident in the film’s second act. Upon its release, the film was banned in Great Britain due to it being considered sadistic and how certain scenes in particular showcased unrestrained violence and sexual humiliation. A scene that has always stuck in my mind, having seen the film as an impressionable teenager, focuses on the mother of a rape victim orally removing the manhood of the perpetrator that killed her daughter. The Last House on the Left is still as chilling today as it was when it was first released; a classic piece of horror cinema.

This is Takashi Miike’s second appearance on this list, but it’s not without reason. Japanese cinema has often thrown up brilliant horror cinema, and Audition is easily part of this canon. When a middle-aged widower named Aoyama attempts to find love again, his movie producer friend sets up a fake casting audition to find him his next great love. Following this, and several dates with Asami – the female coerced into the set up – Asami drugs and tortures Aoyama in an unforgettable sequence.

If you don’t have a fear of needles before watching Audition, chances are you will have afterwards, as Asami proceeds to poke and prod Aoyama with elongated needles, keeping him and the audience in a horrid state of suspense. As the needles enter Aoyama’s eyes, a smirk appears across Asami’s face as she then proceeds to cut off his feet with a wire saw.

The meaning behind the film has been read as both feminist and misogynist, with Miike commenting on how Asami gets revenge for the terrible men in her life (she is a victim of child abuse), but criticisms of the film state that it plays on the male fear of women and female sexuality, with women being objectified and then shown as murderous killers. The film does pose many questions but I am inclined to agree with Miike’s interpretation: Asami really isn’t a woman to mess with.

Ben Wheatley’s second film following 2009’s Down Terrace, was the disturbing genre movie Kill List. It’s a film that lingers on the mind, and the first to really establish Wheatley as a fearless storyteller. The mood of the film starts pitch-black and remains so throughout, keeping its jarring twists hidden, helping the film maintain a level of ambiguity that by the end of the film will leave you disorientated.

Wheatley said when promoting the film that the film’s shocking imagery came directly from his own nightmares, and this rings true as the film’s brutal ideas burrow deep inside your head, and are impossible to shake afterwards. At the film’s heart there is a story involving an out-of-work, married military veteran and former hit man (Neil Maskell), who reconnects with an old partner-in-crime to kill a few unlucky souls for a mysterious new client. To not want to give away any more than this, I suggest you watch the film with an open mind before allowing the dark enigmas and psychological trauma to take hold.