By Jim Mackney Seeing Ronald Reagan address the American from behind his desk in the Oval office is not the heart warming scene you may imagine. The image is eerie, as is the rest of The Reagan Show, a documentary that feels out of step with the world at large and feels ultimately facile. “The Reagan […] 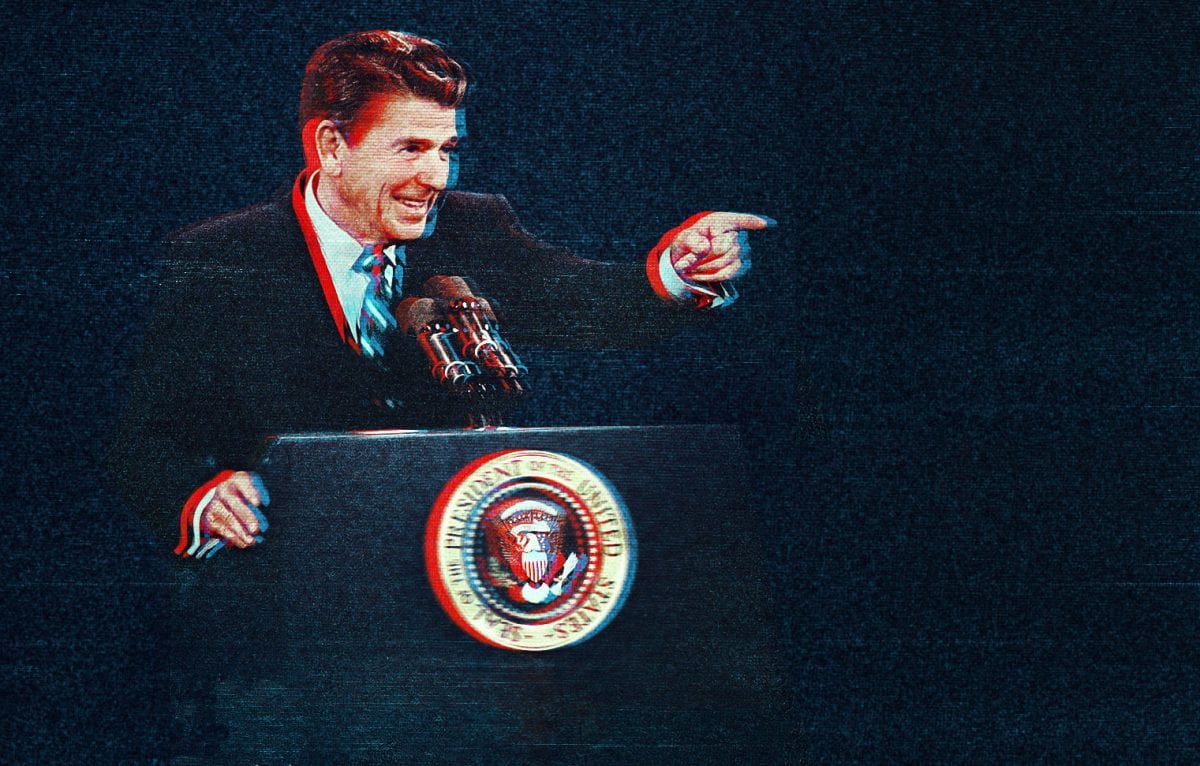 Seeing Ronald Reagan address the American from behind his desk in the Oval office is not the heart warming scene you may imagine. The image is eerie, as is the rest of The Reagan Show, a documentary that feels out of step with the world at large and feels ultimately facile.

“The Reagan Show”, directed by Pacho Velez and Sierra Pettengill, is a bland film made from archive material. The film’s slim runtime of just under eighty minutes, doesn’t help shake the idea that the film doesn’t have anything much to say, despite attempting to tell the story of Reagan’s eight-year presidency.

How Reagan is portrayed is that of a president that is completely fine when sticking to the script and marooned when he does not have that particular buoy to cling to. Reagan is seen as an elder statesman, although this may be a case of the film being seen through slightly rose tinted glass given the current dustbin fire of a presidency America is currently enduring.

Mediation, or to put it simply the art of selecting and presenting information, is common place in society what with the rise of social media but having a President who used ‘modern’ technology to his advantage and capture his daily duties to such a controlled extent signalled a new era in Press and White House relations. Reagan attempted to stage manage his presidency, partly because being on ‘a set’ felt more at home too him than anything else. If the White House had the most footage and kept the press at arms length, they could control the conversation, or so they thought.

The relationship between Reagan and the Press ultimately shifted when he was repeatedly quizzed about the supposed selling of arms to Iran in return for the freeing of US hostages, leading to a humbling televised backtrack and gave birth to the immortal line, ‘… I did not trades arms for hostages, my heart and my best intentions still tell me that’s true but the facts and the evidence tell me it’s not’, this ultimately acting as the presidential version of being caught with your trousers by your ankles.

The films central idea is that Reagan mastered the art of using the media to appear a leader and that Reagan did this with a level control not seen before but John F Kennedy was a true innovator in using the media, Churchill used radio and news reel to lead Britain from the front and, FDR had ‘fireside’ chats with the American people. Reagan wasn’t a revolutionary and he wasn’t much of an actor in Hollywood but he played the role of a President well enough, even when is policies added up to a dismal nothing.

“The Reagan Show” spends a long time looking at Reagan’s relationship with the USSR and how he had spent his first four years as a President being the aggressor to the communist superpower only to then pivot in his second term to help gain a monumental victory for his legacy, in signing deal in the reduction of nuclear weapons with Gorbachev’s USSR. The section is depicted as a triumph but with the current threat of nuclear war between America and North Korea looming it is hard to look upon it fondly.

Given how the world is currently looking at America, seeing Donald Trump bluster his way through his presidency whilst firing off as many incendiary tweets as he can manage, “The Reagan Show” almost makes Ronald Reagan look like the perfect President, leading me to think that the film’s greatest strength is accidentally showing us how far we’ve fallen when we used to think we had hit rock bottom.