After a frustratingly long period of absence, Lynne Ramsey (We Need To Talk About Kevin, 2011) is back with an equally gut-wrenching tale of crime and retribution which is set to thrill the Scottish director’s growing army fans. Based on Jonathan Ames’ novel of the same name, You Were Never Really Here offers an uncompromisingly […] 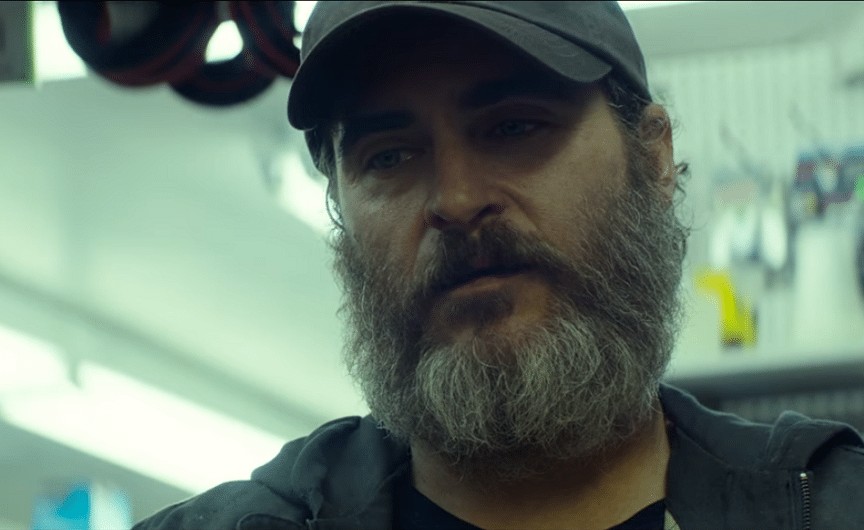 After a frustratingly long period of absence, Lynne Ramsey (We Need To Talk About Kevin, 2011) is back with an equally gut-wrenching tale of crime and retribution which is set to thrill the Scottish director’s growing army fans. Based on Jonathan Ames’ novel of the same name, You Were Never Really Here offers an uncompromisingly gory and deliberately unsettling narrative packed full of dark and disturbing imagery, which is definitely not for the faint-hearted.

Joaquin Phoenix is Joe (think Taxi Driver’s Travis Bickle, only with less bravado and more angst) an ex soldier now working as a hired gun. Haunted by painful childhood memories in which he was subjected to unspeakable violence at the hands of a deeply disturbed father, Joe also appears to be suffering from a severe case of PTSD from his time in the army.

Hired by his usual contractor to extract the young daughter of a powerful politician from the hands of a pedophile gang, Joe finds the child in a local brothel and manages to leave with her after bludgeoning anyone who stands in his way without too much trouble. However, Joe soon discovers that all is not what it seems when two armed men in police uniforms find him in a nearby hotel, kidnap the child (played with incredible assuredness by Ekaterina Samsonov) and leave him for dead. As Joe slowly discovers the true nature of the people who hired him, he soon goes on a killing spree which only serves in dragging him even further into a dark and murky world where nobody is likely to escape his wrath.

Ramsey manages to incorporate a fair amount of imagery and metaphor to a story in which the principle character may have lost his mind, but still somehow managed to hang on to his humanity. With a commendably sparse dialogue and a wonderfully well crafted screenplay by Ramsey herself, we are transported into a world where the line between right and wrong might seem blurred, but is still just about visible.

Phoenix throws himself fully into a role which requires a huge amount of physical and psychological undertaking from this famously tricky performer. He embodies the suffering of his character in a way which is as visceral as the frequent jump cuts and flashbacks to the harrowing events that took place in his childhoods and beyond.

The film is further elevated by Oscar nominated Radiohead band member Jonny Greenwood’s fantastically disjointed score. Adding a whole layer of claustrophobic anguish to the proceedings, the music is used to tell the story of Joe’s own inner monologue in the most brilliant way.

You Were Never Really Here seldom feels the need to explain every single thing that’s taking place on screen, opting instead for a free flowing narrative peppered with wonderfully well picked 50s easy listening songs, which in turn add to the creepiness of some of the more harrowing scenes. A masterclass in filmmaking from a director who understands the true spirit of indie cinema. Ramsey nails it again.

You Were Never Really Here is in cinemas from Friday 9th March.