Shot on an iPhone7 Plus, and costing just over $1 million to make, Steven Soderbergh’s latest feature film Unsane is a ballsy & brave foray into thriller territory from a director who has never been afraid of pushing the boundaries, and making do with what is available to him in the pursuit of innovative projects. […] 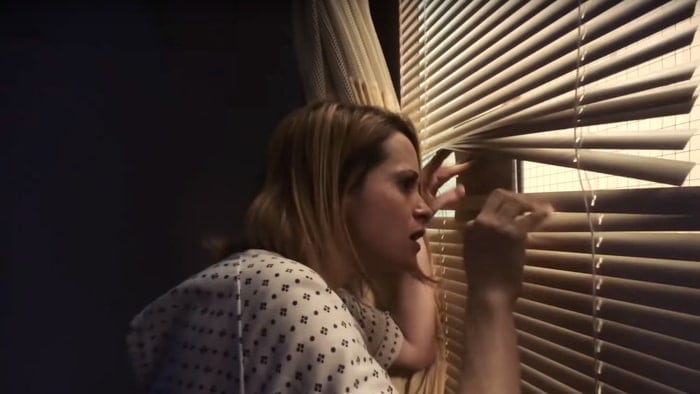 Shot on an iPhone7 Plus, and costing just over $1 million to make, Steven Soderbergh’s latest feature film Unsane is a ballsy & brave foray into thriller territory from a director who has never been afraid of pushing the boundaries, and making do with what is available to him in the pursuit of innovative projects.

Staring Claire Foy (The Crown) as a young woman who finds herself involuntarily committed to a mental institution, Unsane manages to offer a truly riveting, if not always believable story, and is as terrifying in its claustrophobic premise as it is deliciously exhilarating in its B-movie credentials.

Tormented by a stalker in her former job, Sawyer Velentini (Foy) has relocated from her native Boston to a new job and new life in Pennsylvania. Suffering from self-doubt and a nagging feeling that she is being watched, the young woman has thus far found it hard to shake off past trauma, which in turn has made her susceptible to bouts of depression and increasing paranoia. To put her mind at rest and attempt to quash the constant feeling of unease, Sawyer decides to consult a therapist at the Highland Creek behavioural Centre, a rundown medical complex on the outskirts of the city. Things, however, turn into a living nightmare for the young woman when she is admitted then locked up in the mental facility after unwittingly signing herself in for a voluntary 24 hour commitment.

From here on, Soderbergh takes into a journey charged with paranoia and suspense in which we are never quite sure who to believe. As our main protagonist is brutalised, assaulted and debased by the people who purport to have her best interest at heart, we soon find ourselves wondering who is telling the truth in a story increasingly dominated by deliberate ambiguity and doubt.

Claire Foy delivers a brilliantly nuanced performance that’s as far removed as it can get from her infamous turn as Queen Elizabeth II. She offers Sawyer as a resilient, ballsy and unrelenting brawler who refuses to take things at face value, even when she starts doubting her own sanity. Elsewhere, Juno Temple puts in a fantastic turn as mentally disturbed fellow detainee Violet, while Jay Pharoah gives a commendable humour-laden performance as the enigmatic, yet hugely likeable Nate.

Though a little limited by its production values, Unsane does a commendable job in working with what it is given, and that is precisely what makes it work so well. In fact, you soon completely forget that what you are watching on screen was made by something you could just easily be carrying in your own pocket, and for that alone, Soderbergh and all those involved should be saluted for this truly innovative and hugely engaging piece of work.