Ruben Östlund’s mountain set ski drama, Force Majeure, landed with a bang at Cannes in 2014 and was quickly blanketed by an avalanche of critical success. Three years’ later, the Swedish born director returned and took home the festival’s top prize with The Square, a biting satire of the art world and a surreal, madcap […] 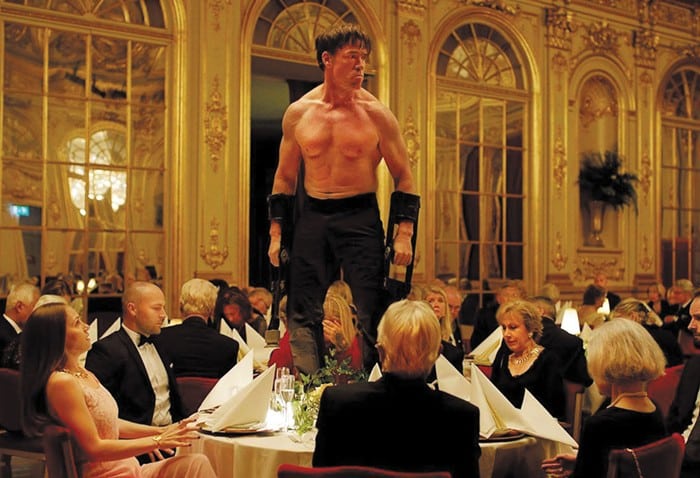 Ruben Östlund’s mountain set ski drama, Force Majeure, landed with a bang at Cannes in 2014 and was quickly blanketed by an avalanche of critical success. Three years’ later, the Swedish born director returned and took home the festival’s top prize with The Square, a biting satire of the art world and a surreal, madcap deep dive into the complexities and flaws of humankind.

Christian (Claes Bang), the model of Scandi-cool, is handsomely dishevelled in his fitted blazers, open neck shirts and round rim glasses and the curator of Stockholm’s Royal-X Museum of contemporary art. He and his museum team, are prepping for the arrival of a new installation piece, a 4 by 4 metre cobble stoned square. It is to be, according to the accompanying plaque, “a sanctuary of trust and caring” where within it everyone will share “equal rights and obligations.”

But, to offset the ideals of the installation and thrust Christian, headfirst, into a downward spiral of self-absorbed destruction, his phone is stolen in an elaborate, superbly executed, performative act of pick-pocketing.

The Ikea-chic landscape coats the film in a superficiality that feels ripped from the pages of a glossy Northern European lifestyle magazine and serves as the perfect backdrop for The Square, with Christian slotting right in at the centre of it all. As events unfold, thin cracks begin to emerge in the fragile veneer of Christian’s floppy haired, affable good nature exposing the ugly arrogance, entitlement and weak will that exists beneath it.

A sexual encounter with Anne (Elisabeth Moss), an American TV journalist profiling the curator and the museum, is already pushed into surreal absurdity when a chimpanzee walks through the front room and is later furthered when Christian refuses to relinquish the spent condom, resulting in a latex stretching tug-of-war.

In another scene, the loud, profane outburst of a man with Tourette’s Syndrome, who’s intermittent clapping and shouts of “fuck off” and “garbage” interrupt the Q&A session of visiting artist, Julian (Dominic West), finds it comic power in the mounting awkward tension of a situation in which the stuffy pretensions of a gallery crowd seems devoid of any sympathy or empathy. The disgruntled mutterings and hushes are only quashed when one patron sternly reminds the rest that these outbursts are a result of a neurological disorder.

The Square’s narrative is woven into the world in which it takes place, allowing for a looser structure where the plot is informed more by the space it occupies and less by traditionalforward-moving storytelling. Through this, Östlund crafts an almost episodic structure with scenes exploring the fabric of social transactions. In this respect, the film is a triumph in examining the extreme ways in which our flaws can consume us and inform our reasoning and decision making.

The misguided and misjudged attempt of two young, hipster marketing managers to promote The Square through a viral video campaign that sees a wide-eyed, six year old, blonde-haired homeless girl blown up whilst standing within the installation’s perimeter, is achingly funny. While the film’s crescendo is a surreal delight, coming in the form of a muscular piece of performance art by Oleg (Terry Notary of Planet of the Apes fame), who storms through a black-tie dinner impersonating a gorilla with such committed dedication the terrorised guests soon descend into a ugly mob of collective aggression. And yet still, you are left wondering about the full weight of a 150-minute film that recognises, pokes fun and points out the well-established shortcomings, entitlement and self-congratulatory aggrandisement of a particular class and world.