Directed by Corin Hardy, the new instalment in what is now being referred to as the “Conjuring Universe” is a rather stale and scare-free affair that’s only just slightly rescued by its female lead’s incredible screen presence, and remarkable performance. Written by Gary Dauberman (It, Annabelle) from a story by James Wan, The Nun offers more of the same old tropes and […] 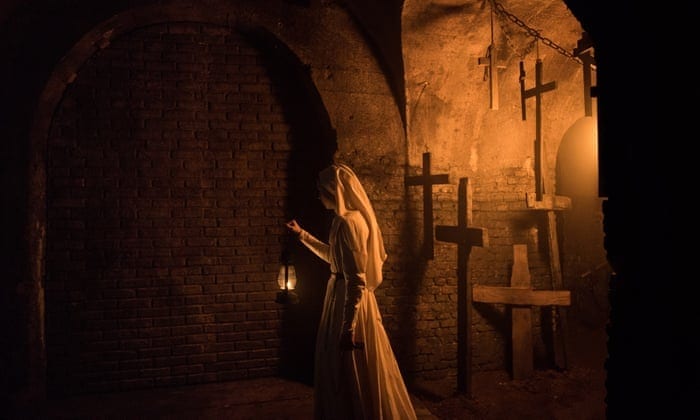 Directed by Corin Hardy, the new instalment in what is now being referred to as the “Conjuring Universe” is a rather stale and scare-free affair that’s only just slightly rescued by its female lead’s incredible screen presence, and remarkable performance. Written by Gary Dauberman (It, Annabelle) from a story by James Wan, The Nun offers more of the same old tropes and hackneyed ideas we’ve come to expected from this hugely lucrative and admittedly very popular franchise, but in the end the film fails to bring anything new to the genre.

When a young nun at a cloistered abbey in Romania takes her own life under mysterious and spooky circumstances, the Vatican enlists the help of troubled priest Father Burke (Demián Bichir) and Sister Irene (Taissa Farmiga), a young novitiate who is as surprised as anyone to have been asked to help investigate the tragic death.

Arriving at the deserted Abbey, the pair soon make the acquaintance of Frenchie (Jonas Bloquet), a young French Canadian farmer who had been unfortunate enough to make the gruesome discovery a few weeks earlier. Risking both their lives and faith, the duo decide to stay at the cloistered Abbey in the hope of finding clues, but soon they start experiencing a malevolent presence which is set to terrorise and make them question what their own eyes are seeing.

Corin Hardy, who is better known for directing music videos for some the most popular rock and pop acts in recent years, offers a story that is hugely lacking in scares. Resorting to the usual clichés, including the addition of a recurring 50s easy listening song in the shape of Jo Stafford’s ‘You Belong To Me’, which is heard hauntingly bellowing from an old wireless radio, Hardy brings very little novelty to a device that we’ve seen used with better results in far scarier horror offering.

Having said that, the film is vastly improved by the casting of Taissa Farmiga (younger sister to Oscar-nominated actor, Vera Farmiga) who puts in awe inspiring turn as a young woman on the cusp of womanhood. Delivering far more than what is expected of her, Farmiga has an entrancing and truly mesmeric presence which will leave you wanting to see more of her impeccable acting and less of whatever else is happening around her.

Overall, The Nun offers the exact same material you would expect from it, but where it fails to convince is in its inability to offer anything resembling a coherent plot or even a satisfying denouement. Those who have followed this franchise over the last few years are sure to find something to tide them over until the next instalment, the rest of us will have to wait for a meatier horror movie to come along to wash away the bad taste left by this dull and rather boring offering.