From the beginning of American Animals, which opens to the sound of bird song and a quote from Charles Darwin, it is clear that it is interested in weightier themes than the average crime thriller. The film takes place in 2003 and is set in Lexington, Kentucky, where Spencer Reinhard (Barry Keoghan) is an art student. At the University of Transylvania, where Spencer studies, […] 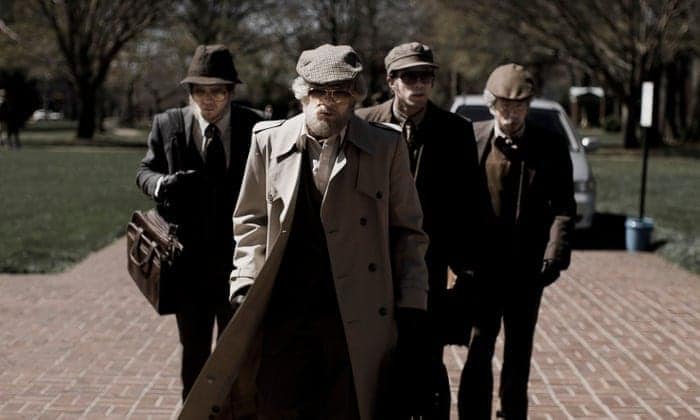 From the beginning of American Animals, which opens to the sound of bird song and a quote from Charles Darwin, it is clear that it is interested in weightier themes than the average crime thriller. The film takes place in 2003 and is set in Lexington, Kentucky, where Spencer Reinhard (Barry Keoghan) is an art student. At the University of Transylvania, where Spencer studies, there are a collection of rare books in their library worth an estimated $12 million. He mentions it in passing to his friend Warren Lipka (Evan Peters) and before long they are planning to rob the library of its books.

They are far from professional – Warren is seen typing ‘how to plan a heist’ into Google – and decide to bring childhood friends Erik Borsuk (Jared Abrahamson) and Chas Allen (Blake Jenner) on board to help them prepare. When the day of the robbery arrives nothing, perhaps unsurprisingly, quite goes to plan.

Where I, Tonya used faux-interviews to highlight differences in opinion and perspective, director Bart Layton uses interviews from the characters real life counterparts to not only frame the story but to give it an air of contemplation and reflectivity. The real life characters, now in their mid-thirties, are able to reflect on their actions and the ways in which they are re-enacted. Layton does a good job of blending the interviews into the wider film, without making it feel narratively disjointed.

Like many heist films, there is plenty of joy to be found in the planning of the robbery. An offhand comment plants the seed for their plans and balloons into the intricate, if flawed, operation that we see unfold. Inspiration is taken from many of the great heist films, ranging from Rififi to Reservoir Dogs, which the wannabe thieves watch and use to sketch out their plans.

The broad question which runs through American Animals is why. Why would four students from good backgrounds commit such a crime? Why were they so dissatisfied with their lives? And what did they think the robbery would achieve? The answers to each of the questions, as the title implies, is rooted deeply within the country the crimes take place in.

Paul Schrader has suggested that the violence in Taxi Driver is an American response to the existential crises that Travis Bickle faces. In much the same way, Spencer and his accomplishes try to silence the doubts in their minds by committing an outlandish crime that they believe will make their lives special. It is a response informed by entitlement and impunity but also hopelessness and a sense of low self-worth. Their actions are imbedded within the country they take place in and suggest that a normal and decent life is no longer valued.

American Animals is a brilliant executed crime thriller that combines documentary and drama to create a textured and compelling film. It mixes the planning of Ocean’s Eleven with the execution of Dog Day Afternoon to create a film that is simultaneously funny and fascinating.