The Happytime Murders is the first feature film presentation from the production company, Henson Alternative, a relatively new arm of the Henson Company and it is a shame that the first feature length film to come from them is a woefully unfunny, cold picture where the initial humour wears off within a matter of minutes. […] 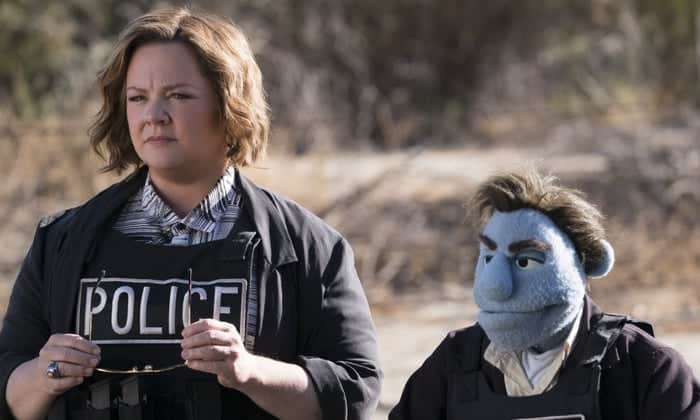 The Happytime Murders is the first feature film presentation from the production company, Henson Alternative, a relatively new arm of the Henson Company and it is a shame that the first feature length film to come from them is a woefully unfunny, cold picture where the initial humour wears off within a matter of minutes.

The film stars Melissa McCarthy as Detective Connie Edwards in the human role as she and a hardboiled ex-Muppet cop Phil, voiced and manipulated by Bill Barretta, go on the hunt for a Muppet serial killer on the grimy side of Los Angeles. McCarthy sinks like a stone in a film written by Todd Berger and directed by Brian Henson where neither of them appear to possess the ability to construct jokes that work visually or to the audience’s ear. The visual gags in the trailer are even less funny in the film and seeing Phil, releasing a can of silly string acting as Muppet sperm, after a sexual encounter in his office says all you need to know about the bar this film sets for itself.

The plot focuses on the murders of several cast members from a 1980’s fictional TV show called The Happytime Gang. The characters are now run down and broken, living in the squalor of LA’s meaner streets. They live alongside humans but there is a tense dynamic between puppet and human, which is where the film attempts to draw a link between race and inclusion but in truth pays so little attention to it that any subtext or substance is null and void.

The relationship between Connie and Phil is played as a sweary buddy cop duo but due to the hatred the characters openly share for each other, you enjoy the film more when they are apart. The hatred they have for one another comes from when Phil nearly killed Connie on active duty, injuring her in the process and requiring her to be given a puppet liver and that’s pretty much it for plot development. Their relationship peaks and troughs throughout the film and by the end I didn’t care if either of them was successful because the characters had no redeemable features to latch on to.

Another human character is Bubbles, played by Maya Rudolph, who appears to have thought she was appearing in a different, far funnier film and whenever she is on screen the film notably lifts in quality with her comedic star power evident amongst the dross that is floating around her.

Puppets being ruder/crude has worked on screen before in Team America: World Police and the huge success of the show Avenue Q means there is an audience for this idea but if those two productions are the high point in the genre then The Happytime Murders comfortably sits at the bottom of the pile, festering away with nothing to redeem it from its self-inflicted wounds.

I am sure the film will find a home with a certain audience of teenagers or adults who still think like teenagers but in all honestly, I cannot recommend giving this film your hard-earned money. Go and spend it on Mission Impossible or Mamma Mia 2 instead, and be reminded of the joys of cinema.