The First Purge’s marketing campaign caused a stir when it released a teaser trailer in the style of a political advertisement. It riffed on classic Republican adverts and baited Donald Trump’s base, with a narrator asking the question, “What makes America great? The answer’s simple, really, Americans make America great. You are the lifeblood of […] 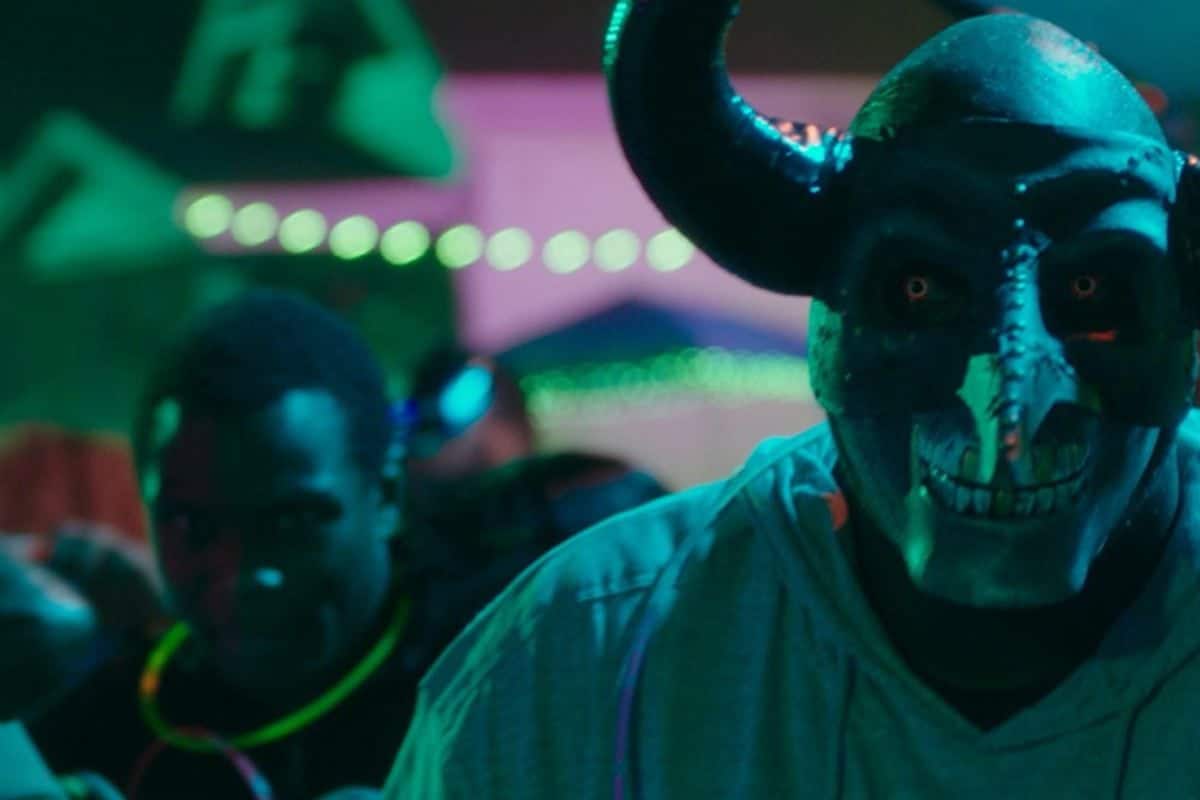 The First Purge’s marketing campaign caused a stir when it released a teaser trailer in the style of a political advertisement. It riffed on classic Republican adverts and baited Donald Trump’s base, with a narrator asking the question, “What makes America great? The answer’s simple, really, Americans make America great. You are the lifeblood of the nation, and your rights as Americans must be safeguarded.” As stock footage of a baseball team, farmland and a blonde haired, prepubescent boy waving a giant American flag appear on screen, the narrator continues, “There’s only one solution to keep our country great. A new tradition. Participate today and nothing will make you prouder than when your boy looks up at you and says, ‘Dad, I want to purge, too.”

The film’s first images run counter to this idealised version of America opening with an extreme close up of a thin, scarred person of colour, who will later be nicknamed “Skeletor”. He is being interviewed by what appears to be a psychiatrist, asking him “Who are you angry at?” Skeletor bares his orange-yellow teeth and spews, “Everyone. Everything.” It is a rather hammy opening but it sets the tone for the 97 minutes of B-movie shoddiness that is to follow.

Skeletor is a resident of a neighbourhood in Staten Island, the area chosen by the US government to be the first to be part of the experiment of a ‘Purge’. The government is neither Republican nor Democrat, both of whom have been gazumped by the “New Founding Fathers of America” or the “NFFA” as they are referred to. They are a right wing, God fearing, NRA supporting/supported party that appears to be a more “alt-right” take on Donald Trump and his current band of undesirables. The poorest people in the area are being offered $5,000 to stay on the island during the 12-hour period of lawlessness with the figure rising if they choose to participate; their movements tracked by sci-fi style contact lenses, which recorded everything the participants see.

The scheme has been concocted by Dr. Updale (Marissa Tomei) but is run by a sweaty, sickly looking representative from the ‘NFFA’, called Arlo Sabian (Patch Darragh). Tomei’s performance is wooden, let down by on-the-nose dialogue. She appears to not realise it was her idea in the first place and at one point even utters the line, “What have I done?” which lead to much laughter in the auditorium I was in. The resistance is lead by local activist, Nya (Lex Scott Davis) and local drug kingpin Dimitri (Y’lan Noel). Nya has a younger brother, Isaiah (Jovian Wade) who is frustrated with his and sisters poor and challenging circumstances and flirts with the idea of joining Dimitri’s gang as a dealer and Nya and Dimitri used to date! How convenient.

There are a dozen or so characters that populate the film, who are meant to be standing in for a whole borough of New York City but the social commentary portions of the film are simplistic even for a genre film such as this. The film consistently goes for the easy answers and although there is some pleasure in seeing resistance forces blow away mercenaries in KKK uniforms, the whole thing does feel quite fetishised. Director Gerard McMurray lingers on the wide array of weapons being used, ramps up the sounds of slit throats and stabbed chests and uses high levels of gore whenever possible.

The First Purge does offer a twisted kind of pleasure by ensuring that the ‘NFFA’ are seen as manipulative white supremacists, who use mercenary gangs in an attempt to rid a whole borough of New York City of people from low socio-economic backgrounds, to only be met by a resistant group of African-American avengers.However, this pleasure does not allow me to overlook the bad dialogue, dodgy pacing and the, at times, questionable set pieces including a white supremacist motorbike gang massacring African-Americans in a church. The First Purge is an idea that could have been successful, however it is let down by lazy choices and a love for the violence and skullduggery it is ‘warning’ against.