★☆☆☆☆ Serenity is arguably one of the most bonkers films in modern cinema. Written and directed by Stephen Knight (Locke; the screenwriter for Eastern Promises), it has such an insane premise that there’s something curiously admirable about the film’s commitment to complete and utter madness. However, it’s not enough to compensate for a story that is […] 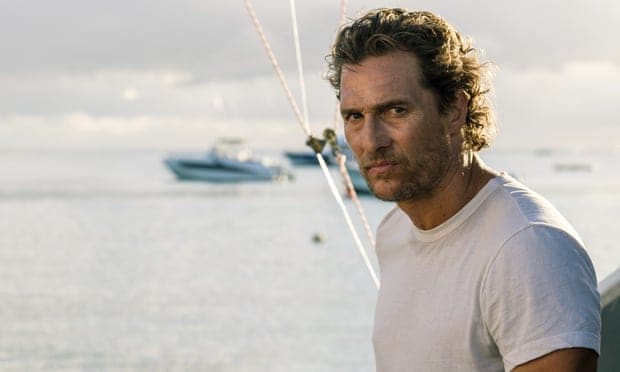 Serenity is arguably one of the most bonkers films in modern cinema. Written and directed by Stephen Knight (Locke; the screenwriter for Eastern Promises), it has such an insane premise that there’s something curiously admirable about the film’s commitment to complete and utter madness. However, it’s not enough to compensate for a story that is too self-conscious and over the top.

Matthew McConaughey plays Baker Dill, a chain-smoking Iraq war veteran who lives on an idyllic, remote island. He spends his days on a fishing boat in a constant search for his next big catch, whilst relishing the freedom of the open waters, but one night everything changes. Dill’s peaceful life comes crashing down when his ex-wife Karen (Anne Hathaway) shows up with a unique proposition: Take her violent husband Frank (Jason Clarke) out on the boat, get him drunk and then throw him overboard. If Dill completes this unsavoury task, she’ll pay him $10 million in cash, and there’s also the prospect of reuniting with his estranged son Patrick (Rafael Sayegh), a teenager who blocks out the world by obsessively playing video games.

Now, there are plenty of ridiculous plots that made for great movies, but this is not the case for Serenity. The film has such a convoluted storyline that it raises the question of how did an acclaimed director come up something so half-baked? Serenity shows promise in the first half, but it doesn’t take long for the whole thing to descend into chaos. Everything feels contrived and senseless, and there’s an infinite number of strange quirks, including a mysterious man with a briefcase who pursues Dill around the island. Also, the film seems disjointed, as though scenes were chopped and changed rigorously, which makes for quite a jarring experience.

Serenity takes the viewer down a rabbit hole of mystery and the big reveal is beyond ludicrous, and to say you’ll have to suspend your disbelief is an understatement. Despite the gaping holes in logic, Serenity explores some interesting ideas, such as morality and the nature of human existence. There’s no doubt that Serenity is ambitious and certainly memorable, but it’s never convincing and hard to take seriously.

Serenity is a disastrous movie, which is a shame because it’s a waste of on-screen talent. The film is a special kind of bad that it could potentially develop a cult following, but ultimately, it’s a bold vision gone awry. Serenity is a misfire of epic proportions.