About 25 minutes into Revenge, a close up of an ant heralds one of my favourite sequences in a 2018 film to date. For a second it’s just there, large and still in the middle of the screen. Then, in slow motion, with a sound effect like a crashing wave, a drop of blood falls […] 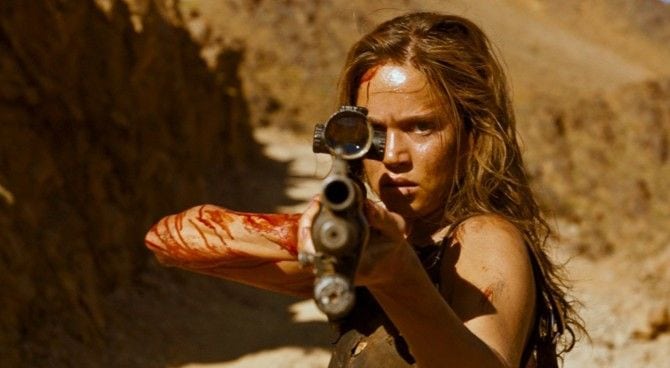 About 25 minutes into Revenge, a close up of an ant heralds one of my favourite sequences in a 2018 film to date. For a second it’s just there, large and still in the middle of the screen. Then, in slow motion, with a sound effect like a crashing wave, a drop of blood falls on it. One, two, three, and more drops fall until the film returns to normal speed and the blood becomes a small lake, swallowing the ant. When we move up, we know what we’re going to find: a young woman impaled on a dead tree. This should be a death scene but it’s a rebirth, forged in blood, pain and fire. It won’t be her last.

The young woman is Jen (Matilda Lutz), she’s gone for a weekend away in a huge house in the desert with her rich, married, boyfriend Richard (Kevin Janssens). After she leaves, Richard is planning a hunting trip with his friends Stan (Vincent Colombe) and Dimi (Guillaume Bouchède), but they arrive a day early. After a drunken night, and with Richard away from the house, Stan rapes Jen. When Jen refuses to stay silent, she ends up on that tree, but she doesn’t die.

That’s more plot summary than this film needs, because Revenge is a film of relentless focus, and one that does just what it says on the tin. However, that’s not to say that writer/director Coralie Fargeat is simply co-opting the beats of rape-revenge cinema, there are layers here; a subtle refinement of how this kind of filmmaking regards women.

In many ways, though it is stylistically almost its opposite, the film Revenge puts me most in mind of is Meir Zarchi’s infamous I Spit On Your Grave. The main female characters share a name, and each is pursuing vengeance on a group of three men after being raped and left for dead. Jen is shown as confident in her sexuality and aware of her attractiveness, while Stan speaks in the victim blaming mode we often see from men’s rights activists and the comments section of the Daily Mail. Jen turned him on when she danced with him, says Stan, she knew what she was doing, the implication is that it’s her fault what he’s about to do to her. The film rejects this as strongly as Jen does, this isn’t uncommon, indeed I Spit has almost identical dialogue from its rapists towards its Jen, what is different is the way Fargeat displays her Jen. The only nudity on Jen’s part comes in a barely glimpsed moment when Stan is spying on her, and the rape itself is depicted almost entirely through sound. The film knows as well as Jen does the power of her body and it only allows her to be displayed in that light. Outside of the rape, which we don’t see, Jen’s body belongs to her. The film is essentially the process of her asserting that, repairing herself, and ensuring the people who made it belong to them without her consent pay. It’s an interesting thing— non-exploitative exploitation cinema.

With its straight narrative line and set of genre conventions, Revenge isn’t driven by character. This is a film that deals with people at their basest levels. We understand what drives the men to pursue Jen. Richard has a wife and kids, and it’s implied Stan does too (“I’m divorcing her”, he jokes, when the guys are chatting amongst themselves and Jen) and Jen clearly has all the motivation she needs. What powers the film beyond the simple mechanics is imagery.

From the start, Fargeat and cinematographer Robrecht Heyvaert push the film’s use of colour into a place one step from surreal. The crisp images with their almost oversaturated blues and yellows make the desert feel like a world of its own, as if plugging us in to the delirium of Jen’s pain. The colours are striking in themselves, but they also make the splashes of other colours more impactful, from the dark red of blood to the pink of Jen’s star shaped earrings (a link back to the carefree Jen of the first act, and a key prop in that what happens to them feels reflected in her character). This otherworldly feel is taken further when, needing to remove the wooden stake left in her guts from the tree, Jen ingests Peyote. This is another of the film’s most spectacular scenes. It’s Jen’s second rebirth. Up to this point she’s been diminished; injured, pushing on through will, but after mending herself the film takes a moment to reintroduce her, using iconography left on her when she repairs her wounds as a way to show us without dialogue that this is if not a different woman then certainly one who has changed until this thing she has to do is accomplished.

The other striking thing about the visuals here is in the use of space. For about an hour Fargeat has a vast expanse with which to work, but we never lose the sense of how the characters positions relate to each other. This is something that seems so simple, but is so frequently botched, Fargeat and her co-editors make a real virtue of it. Vistas show the telltale signs of how they find each other, and then when they come to close quarters, whether it’s on the side of a mountain or back at the house, the depiction of space between them and encroaching danger has a palpable tension. It all culminates in a masterful, blood soaked, sequence of Jen and her final adversary stalking each other.

In its framing, lighting, cutting and music (by ROB, delivering another standout synth score after the Maniac remake), Revenge simply bleeds style. The style could easily have been the film’s substance and I’d still have given it a positive review, but Revenge uses that style to deliver something of substance; an exploitation film that makes us think about how we categorise and view exploitation film. That it does this while also delivering all the goods that a fan of this kind of cinema could want is remarkable. Fargeat folds genre criticism into genre filmmaking in a provocative manner. The final shot almost feels like the director looking to us, asking us what impact she has left. The answer is this is an exceptional feature debut from a filmmaker who seems already to have marked out a personal style and set of concerns. I hope she continues to provoke as much as she entertains.