Loosely based on the video game series of the same name and staring the force of nature that is the mighty Dwayne “The Rock” Johnson, Rampage had all the makings of yet another meat-headed, big, brash and silly disaster movie, so it was a genuine surprise to find out just how much fun this movie […] 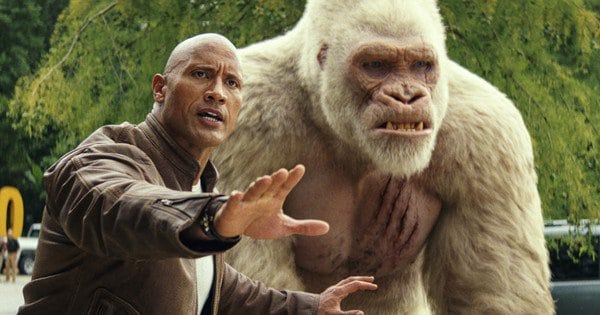 Loosely based on the video game series of the same name and staring the force of nature that is the mighty Dwayne “The Rock” Johnson, Rampage had all the makings of yet another meat-headed, big, brash and silly disaster movie, so it was a genuine surprise to find out just how much fun this movie has turned out to be.

With the recent release of the hugely disappointing sequel to Guillermo de Toro’s Pacific Rim which left more than a lot to be desired, one could be forgiven for growing tired of the whole Kaiju inspired copycats doing the rounds, however Rampage has come just at the right to time to throw a huge spanner in the works for those convinced that this trend has run its course. With inspiration taken from classics such as King Kong, Godzilla and even Dwayne Johnson’s more recent action movies such as Jumanji: Welcome to the Jungle and San Andreas, Rampage offers a riseclously outlandish premise which is over-egged with hugely inflated action set pieces, but for some reason, all of this somehow works.

Dwayne Johnson is Primatologist Davis Okoye, a former special ops guy who once specialised in catching poachers who prey on endangered species. Having spent a lifetime caring for vulnerable primates in their natural habitats and later at a Los Angels facility, Davis soon finds himself at the centre of a scientific experiment gone wrong when one of his charges, a gorilla named George, comes into to contact with a manufactured gene enhancing substance which results in the rapid growth of the animal overnight. All hell breaks loose, when George, accompanied by similarly altered creatures, one of which baring more than a little resemblance to the legendary Godzilla, goes on a “rampage” across the country killing and maiming anything he and his new companions come across.

Staring alongside Johnson is the brilliant Naomi Harris as Dr. Kate Caldwell whose anti-cancer experiments were used to create the pathogen responsible for George’s abnormal growth and destructive behaviour, and Jeffrey Dean Morgan as a gunslinging, hip-swinging government agent with more attitude than a John Wayne character, who offers to lend the duo a helping hand as they confront the owners of the multi-billion corporation responsible for creating this havoc.

Director Brad Peyton offers a big old action movie with a ludicrously convoluted storyline which makes very little sense, but which somehow manages to keep you hooked from get go. Johnson is, as ever, hugely likeable in the principle role, which will come as no surprise to any of his fans, but where the film really manages to score most of its high points is in the use of classic disaster movie with its tongue firmly in its cheek at all times.

Despite a deeply flawed and baggy screenplay, which at one point seems to even forget some of its earlier characters, Rampage nevertheless never leaves you feeling shortchanged or cheated in any way. In fact the film delivers way more than it set out to which is why you’ll find yourself onboard with its narrative despite its deeply convoluted and nonsensical plot-line.