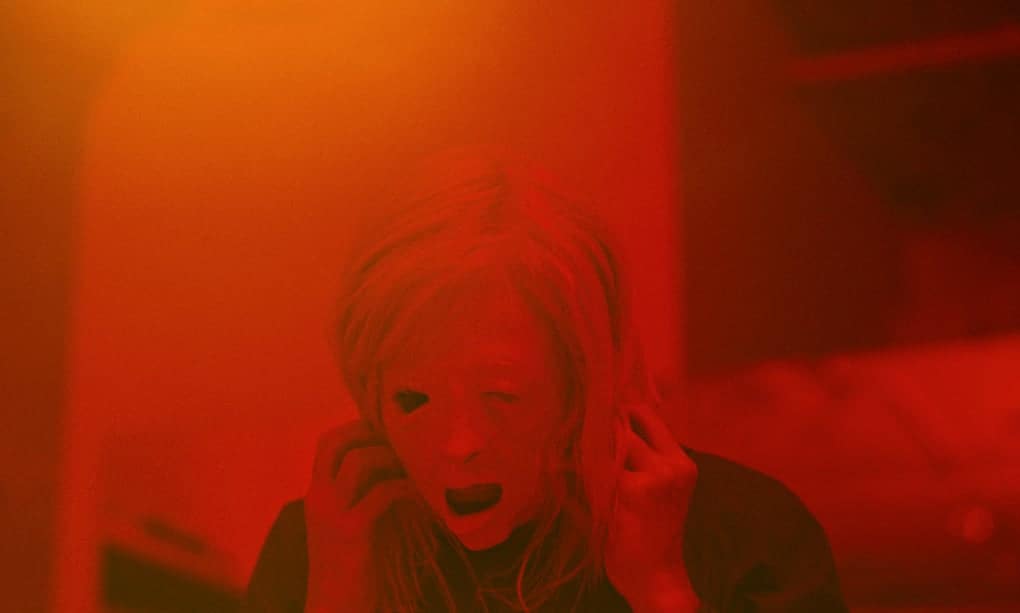 Inevitably Brandon Cronenberg’s films will be paralleled to that of his father, director David Cronenberg, the sci-fi body horror aficionado whose prolific work throughout the 70s, 80s, and 90s influences the genre to this day. With Possessor, Cronenberg utilizes his paternal influences, but successfully surpasses them to create his own fully formed vision.

Possessor refers to a contract killer whose consciousness is implanted into the body of another person in order to carry out an assassination. The executioner is Tasya Vos (Andrea Riseborough), who works in extreme corporate espionage headed up by Girder (Jennifer Jason Leigh), a former assassin now solely focused on nurturing Vos’ talents. Fresh off a hit job, Vos has the impulse to reconnect with her estranged husband and son. But upon her visit, she immediately struggles. The mother/ wife moniker feels like a pretence, with almost no sentimental bearing left within. Signalling to a disturbing realization, the erasure of memories and associated emotions with each possession.

Prompted to escape, she swiftly returns back to work; possessing the body of Colin Tate (Christopher Abbott) with the purpose of killing his girlfriend’s (Ava played by Tuppence Middleton) father, John Parse (Sean Bean) a billionaire tech tycoon. A party at Parse’s mansion becomes a scene of gruesome murders, but Vos is unable to complete the job task, turning the gun on herself and finishing Colin off. Seemingly his innate survival mechanisms kick-in thrusting his consciousness to the surface. An internal tug-of-war ensues, vying for control of Colin’s body.

The time period is ambiguous, flip mobile phones suggest the noughties, but the off-kilter invasive technology hint at an alternate reality.  The killings are exaggeratingly brutal. Repeated stabbings are shown in meticulous goriness; bodies violently convulsing from the shock of a severed artery, copious amounts of blood squirting everywhere. Cronenberg opts for practical effects instead of CGI for that added layer of authenticity, roping in the services of prosthetics supervisor Daniel Martin. An utterly disturbingly sanguinary scene of Colin attacking Parse with a fire poker; skewering it deep it into his skull, then twisting it around, ensuring that every bone crack and blood splat is heard crystal clear.

Riseborough is exceptional, Vos is an amalgamtion of previous roles. Either a grounded version of her otherworldliness in Mandy, the same bleached locks but a much less clumsy killer than her Mia in Black Mirror’s Crocodile, with the touch of the insanity of Nancy. Close-ups of her face take-up a considerable amount of screen time, looking perpetually bewildered as her interior world gradually hollows out.

Fascinating scenes of her familiarising herself with Colin’s physique and the accompanying newfound sexual urges. Abbott manages to eloquently insight these momentary fresh bursts of excitement within Vos, even if its him we are seeing. Bizarrely it reminds of 80’s comedy All of Me, where Lily Tomin and Steve Martin occupy the same body, albeit a more sinister interpertation. Collages of strobing montages are littered throughout in a bid to visualise Vos and Colin’s inner workings, tinting the whole film with a cerebral, dream-like texture.

The gratuitous violence never feels out of place. Juxtaposing it with minimalist hi-tech and sophisticated settings, coupled with a warped meta narrative, high calibre of acting and philosophical underpinnings make Possessor a slick and intellectual offering. Cronenberg unabashedly puts numerous strong ideas forward which would otherwise feel overstuffed and previous efforts by other directors have usually been poorly executed. But in this instance it all works, as existential quandaries are a natural by-product of the oddity of being in someone else’s psyche. The end-result is refined, body-horror-sci-fi at its best.

Possessor is out now on VOD.