Based on the life of Arunachalam Muruganantham, Pad Man is the biopic of Lakshmikant Chauhan (Akshay Kumar), the man who dreamt of manufacturing and distributing subsidized sanitary pads to the women of India after seeing the dirty rags his wife was using during menstruation. Due to the taboos surrounding menstruation in his small village and […] 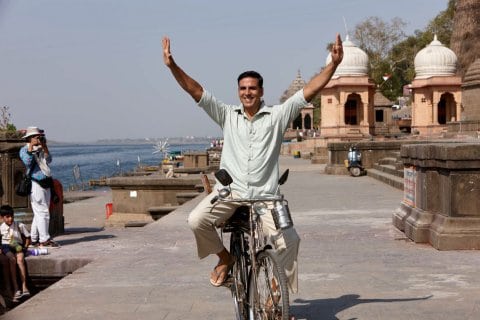 Based on the life of Arunachalam Muruganantham, Pad Man is the biopic of Lakshmikant Chauhan (Akshay Kumar), the man who dreamt of manufacturing and distributing subsidized sanitary pads to the women of India after seeing the dirty rags his wife was using during menstruation. Due to the taboos surrounding menstruation in his small village and across India in general; it is not just economics, but social mores Lakshmi must do battle against.

What may not seem at first cinematic material is in fact woven into an engaging enough narrative with a pertinent social message.

The crux of the film is in a man trying to make it in a woman’s world. This lends itself to the film’s humour, with one early scene a pharmacist handing Lakshmi sanitary pads under the counter as ‘if they’re marijuana or something’. It also drives the conflict, as Lakshmi’s obsessions leads to his labelling as a pervert and drives away his wife Gayatri (Radhika Apte), the woman he first did this for. As Gayatri says to him ‘there’s a world out there that isn’t between a woman’s legs’.

It can come across a little condescending as Lakshmi is painted as the great emancipator to a woman’s menstrual needs. Things improve on this front when Lakshmi works with the urbane Rhea, but rural women never truly escape their framing as ignorant and bound by traditions and superstition.

Known as a macho action star, Akshay Kumar makes for a charismatic lead who lets Lakshmi exude his passions. A highlight of the film is a scene in which Lakshmi tests his sanitary pad on himself using dye and blood from the butcher’s, only to find his trousers soiled as he cycles home.

Lakshmi clearly has an overwhelming love for Gayatri. Unfortunately past an opening musical montage the audience never really sees why, for her personality is made up of little more than an opposition to sanitary pads. Kumar is also a little old for the role of upstart entrepreneur, and in the second half with business partner Rhea (Sonam Kapoor) this shows up especially.

As may be expected of a 140-minute rags to pads story, parts drag. While affecting, the woes of ignorance that Lakshmi must endure in his village go round and round. In the second act, as Lakshmi finally starts to achieve some recognition the film starts to feel like its wrapping up, only for a whole new chapter to begin.

This also being Bollywood, there are of course moments of melodrama and contrivance. As Lakshmi develops his first pad he runs into a woman with an MBA in great need of one. There are moments as syrupy as the red dye Lakshmi places on a pad when he remonstrates with his wife and the village. It isn’t Ibsen, but neither is it trying to be.

Buoying up the film is an upbeat, engaging score interweaving plot with montage. The production values are high, and the cinematography is crisp in a saturated if slightly corporate way. Rarely for a Bollywood film, there is only one outright song and dance sequence, aptly a celebration for a girl who is ‘coming of age’.

At the screening, the publicity team asked for viewers to take a selfie with a sanitary pad to promote the film and its message. After watching Pad Man, I’m certainly more comfortable with the idea. I guess Lakshmi’s work is done.