It would be easy to dismiss Ocean’s 8 as being little more than the cynical cash in it appears on the surface; a crass attempt to squeeze a few more bucks out of a stagnating franchise by assuming the façade of a contemporary ‘woman’s picture’. Indeed while this critic doesn’t concur with such musings, I’d […] 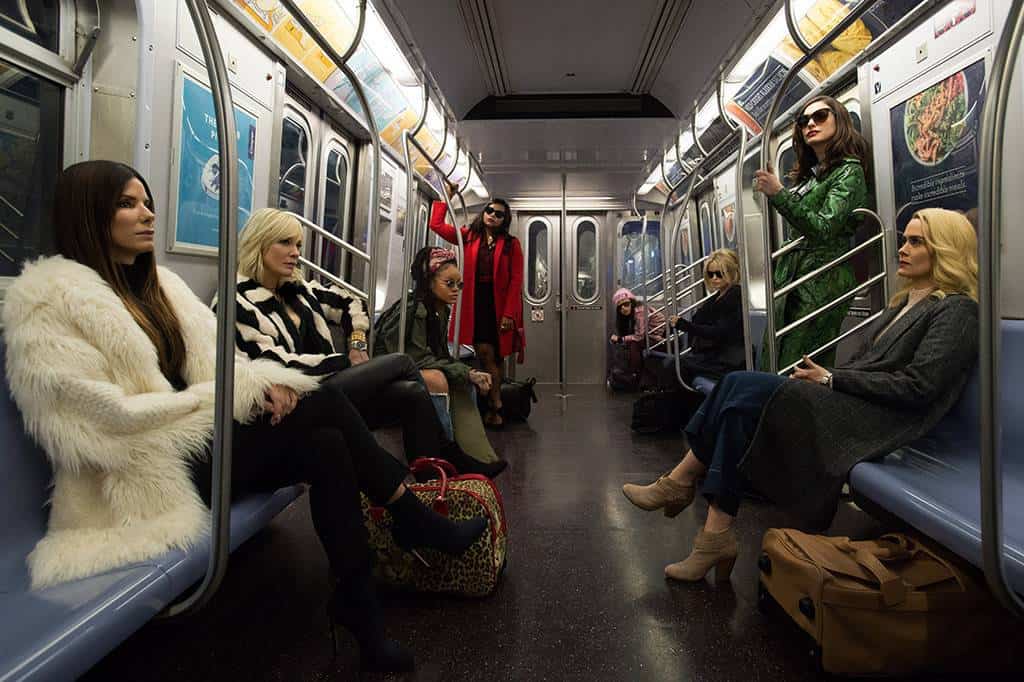 It would be easy to dismiss Ocean’s 8 as being little more than the cynical cash in it appears on the surface; a crass attempt to squeeze a few more bucks out of a stagnating franchise by assuming the façade of a contemporary ‘woman’s picture’. Indeed while this critic doesn’t concur with such musings, I’d be lying if I said it wasn’t in the back of my mind as I settled in to watch this soft reboot-cum-sequel to Steven Soderbergh’s glossy heist trilogy.

More relevant was the realisation that this niggling notion mattered so little to me once the lights had dimmed. Unfazed by the sneering hostility directed at it by some so-called “fans”, Ocean’s 8 reveals itself to be a pure, vivacious crowd pleaser from the opening frame. Augmented by slick direction, sassy dialogue and stellar performances, it’s no exaggeration to say that watching this film was easily the most fun I’ve had in a cinema this year so far.

Writer/director Gary Ross (he who did such great work back in 2012 with the first Hunger Games instalment) takes a clear cue from Soderbergh, opening – as Ocean’s Eleven did – by introducing us to the titular con artist as they manipulate their way out of jail. Debbie (Sandra Bullock), sister of the now-deceased Danny Ocean, is serving time after being convicted of arts fraud five years ago. But having convinced the parole board of her rehabilitation – wryly proclaiming that she now dreams of a simple life that’s comprised of “quiet walks and paying bills” – she goes free, and immediately sets into motion a plan to steal a diamond necklace worth $150million from the forthcoming Met Gala.

If Debbie is to successfully orchestrate such an audacious heist, though, she’s going to need some help. And so aided by Lou (Cate Blanchett), her former partner-in-crime, she sets about assembling her own crack team of cons to assist in pulling off the job. They include: Rose (Helena Bonham Carter), a disgraced fashion designer; Amita (Mindy Kaling), a skilled jewellery maker who is desperate to move away from her domineering mother; Constance (Awkwafina), a loud-mouthed street hustler; Nine Ball (Rhianna), a tech-whiz and computer hacker; and Tammy (Sarah Paulson), a suburban mom who moonlights as a racketeer selling stolen goods.

Ross’ script establishes each character in turn with broad signifiers, allowing the individual performers the space to impart their own quirk & personality. Some suffer – both Blanchett and Kaling barely register somehow – while others flourish: Bullock brings a commanding charisma, while Rhianna and Bonham Carter stand out most distinctly from the rest of the cast. Although if one was to pick an MVP it would, hands down, be Anne Hathaway, who relishes every moment of screen time as the smug & acidic actress whom Debbie plans to use as an unwitting mule to help steal the necklace.

Peppy photography courtesy of DP Eigil Bryld, and Juliette Welfling’s lively edit instils the action with an thrillingly suave energy, while the feisty lines of Ross’ script combine effortlessly with the irresistible magnetism of the ensemble to ensure that the laughs keep coming. Even a late cameo from irritatingly ubiquitous popinjay James Corden, though distracting, isn’t enough to diminish your enjoyment.

What does trouble, however, is the reality that, along with Paul Feig’s Ghostbusters remake, Ocean’s 8 marks yet another attempt by a studio to recalibrate an existing brand by simply swapping the gender dynamics in front of the camera, while apparently appearing less keen on offering a female gaze from behind it. Tellingly, in a scene that reveals what the individual team members would opt to do with their share of the loot, we see one fulfil her dream of becoming a film director; a deft moment of clarity that surely must be pursued if this franchise is to truly flourish once more.