In the same week that Sergio Leone’s classic western A Fistful of Dollars is rereleased, Indonesian director Mouly Surya brings us a subversive reworking the genre and its masculinised tropes. Marlina the Murderer in Four Acts opens on the island of Sumba where Marlina (Marsha Timothy) is mourning the death of her husband. A group […] 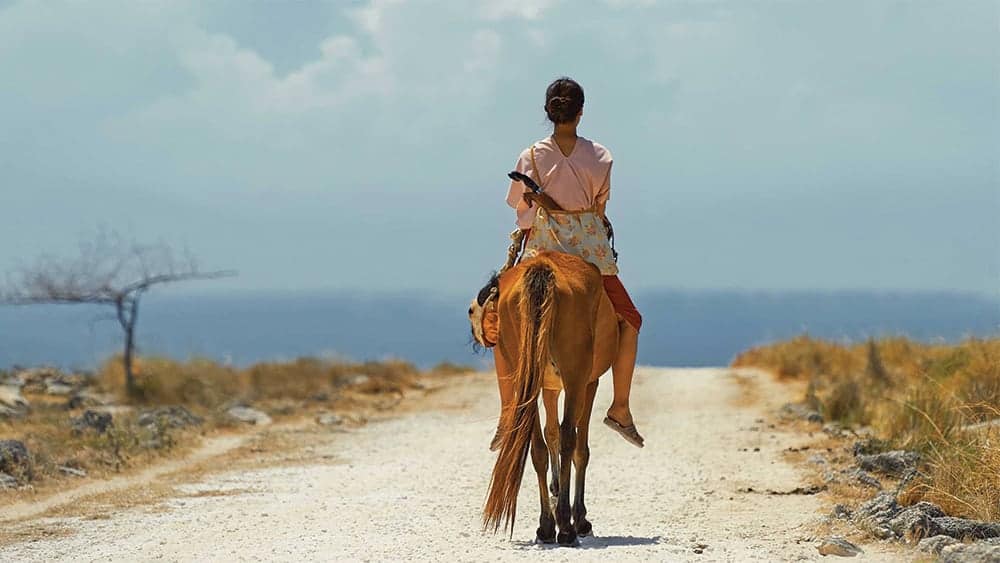 In the same week that Sergio Leone’s classic western A Fistful of Dollars is rereleased, Indonesian director Mouly Surya brings us a subversive reworking the genre and its masculinised tropes. Marlina the Murderer in Four Acts opens on the island of Sumba where Marlina (Marsha Timothy) is mourning the death of her husband. A group of seven men, led by the grey haired Markus (Egy Fedly), arrive at her home intent on raping her and taking her livestock.

Before the intruders can enact their plans, Marlina feeds them poisoned soup and decapitates Markus with a machete. Two of the men manage to survive the poisoning and attempt to track Marlina down and recover Markus’ head.

With her third film, director Mouly Surya cleverly takes an overly American and masculine genre and reimagines its more outdated elements. The desert canyons and macho cowboys are replaced by the beautiful yet rugged Indonesian landscape and its female title character. It is the kind of geographical displacement that was seen with A Girl Walks Home Alone at Night, which was described as an Iranian vampire western.

Both films are a creative departure from the work of directors like John Ford, Sam Peckinpah, Howard Hawkes, and Quentin Tarantino who envisaged the Wild West as a landscape where male virtues and struggles are expressed. Instead there is an ambiguity to Marlina’s feelings. She may be relieved to have survived the robbers but at the same time is haunted by Markus’ headless ghost. For Surya, the western can be a type of film that can encompass many different perspectives, feelings, and experiences.

All this is accompanied by a deadpan humour and jaunty soundtrack that bring to mind the work of Jim Jarmusch, in particular his surrealist western Dead Man. There is an independent spirit that runs through the film that is not afraid to blend genres and break convention.

The offbeat manner in which the story is told does, however, feel strangely at odds with the way in which the narrative plays out and as a result there is something rather unsatisfying about Marlina’s search for vengeance and justice. The violence, though slick and stylish, feels empty and failed to elicit a reaction from me.

Despite its attractive cinematography, the film is littered with empty symbolism that feels disconnect from the characters’ journeys. In the end, it can be hard to be invested in Marlina and her search for redemption. Too often interesting ideas lack a visceral edge.

As refreshing as it is to see a director assert a female storyline and viewpoint, Marlina the Murderer in Four Acts only shows glimpses of its true potential. There is definitely more to come from this new brand of western.