Grab your GoGo boots, slap on the sunscreen, and warm up that vibrato, for it’s finally time to return to the fictive Greek isle of Kalokairi; a lush landscape where the sky is always blue, the sea always sparkles, and where no problem is too big that it can’t be resolved by someone belting out […] 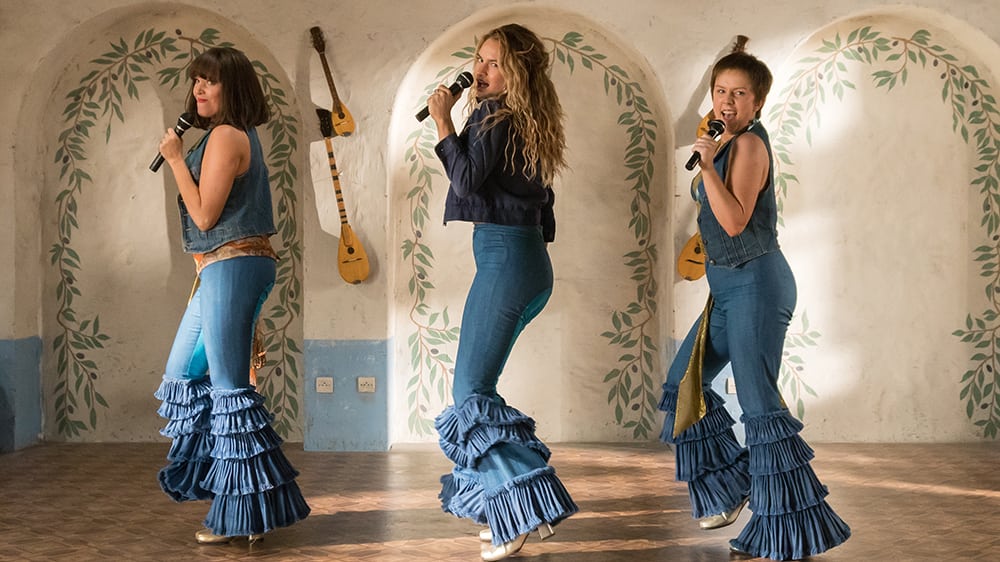 (L to R) Young Tanya (JESSICA KEENAN WYNN), Young Donna (LILY JAMES) and Young Rosie (ALEXA DAVIES) in "Mamma Mia! Here We Go Again." Ten years after "Mamma Mia! The Movie," you are invited to return to the magical Greek island of Kalokairi in an all-new original musical based on the songs of ABBA.

Grab your GoGo boots, slap on the sunscreen, and warm up that vibrato, for it’s finally time to return to the fictive Greek isle of Kalokairi; a lush landscape where the sky is always blue, the sea always sparkles, and where no problem is too big that it can’t be resolved by someone belting out a couple of garish hits from the ABBA Gold album.

It has been 10 years since we saw the sun set on Sophie Sheridan’s (Amanda Seyfried) happily ever after, and my my, how things have changed. Following the recent death of her mother, Donna (Meryl Streep), Sophie has taken it upon herself to open her family’s island villa as a guesthouse with the help of her mum’s bezzies, Tanya & Rosie (Christine Baranski & Julie Walters, sadly underused), and her stepfather/possible real father, Sam (Pierce Brosnan).

Part sequel & part prequel, writer/director Ol Parker’s jubilant jukebox musical follows Sophie as she attempts to go it alone; her dull-as-dishwater hubby (Dominic Cooper) having been temporarily dispatched to America on a business mission. Without her mum’s guidance, though, Sophie begins to doubt her own ability to succeed. Juxtaposing her story with flashbacks to a young Donna – played with spunky conviction by Lily James – Parker deftly uses the two timeframes as a stepping-off point to further explore the pair’s mother-daughter relationship, as their lives begin to follow a similar trajectory.

Clunky exposition and corny call backs to the first film may lead to a somewhat soporific opening movement, but as Parker’s direction begins to relax, we see more and more of that freewheeling confidence that made the original such a delight. There’s an impressive technical proficiency here that the ‘08 one lacked, the seamless transitions between the past and present allowing the different strands of the story to melt into one.

Embracing the infectious disco energy of the music, Mamma Mia! Here We Go Again giddily mixes catchy notes with emotionally raw undertones. The cast spiritedly wear their hearts on their sleeves, James in particular standing out as she suddenly finds herself confronted with the reality of bringing up her daughter alone, following a succession of one-night stands with Harry, Sam and Bill (Hugh Skinner, Jeremy Irvine and Josh Dylan successfully standing in as the younger iterations Colin Firth, Brosnan and Stellan Skarsgård); the film crucially never condemning Donna’s decisions – her character drawn with a refreshingly mature, sex-positive independence that recalls Kay Cannon’s handling of teenage promiscuity in the sorely underrated Blockers earlier this year.

Then there are the songs, of course. Reprises of ‘Dancing Queen’ and the beloved titular track will keep more modest fans entertained, while true ABBA aficionados will no doubt whoop with joy as a game Cher blares ‘Fernando’ at the top of her voice, and find their heart quivering as Streep and Seyfried perform ‘My Love, My Life’. The lusty sentimentality will make your soul soar, the cheesy dance sequences will make your heart sing; the sight of Hugh Skinner battling a pair of French waiters dressed in Napoleonic uniform, using a baguette as a weapon and while singing ‘Waterloo’, will be blissfully imprinted on your mind forevermore. Honestly, how could ya resist?