It has always taken something special for Japanese animations to register with a global audience. Over the years, films like Akira, Ghost in the Shell, and Spirited Away have captured viewer’s hearts across the world. But even though a large number of animes get produced each year, only a couple ever manage this feat. The […] 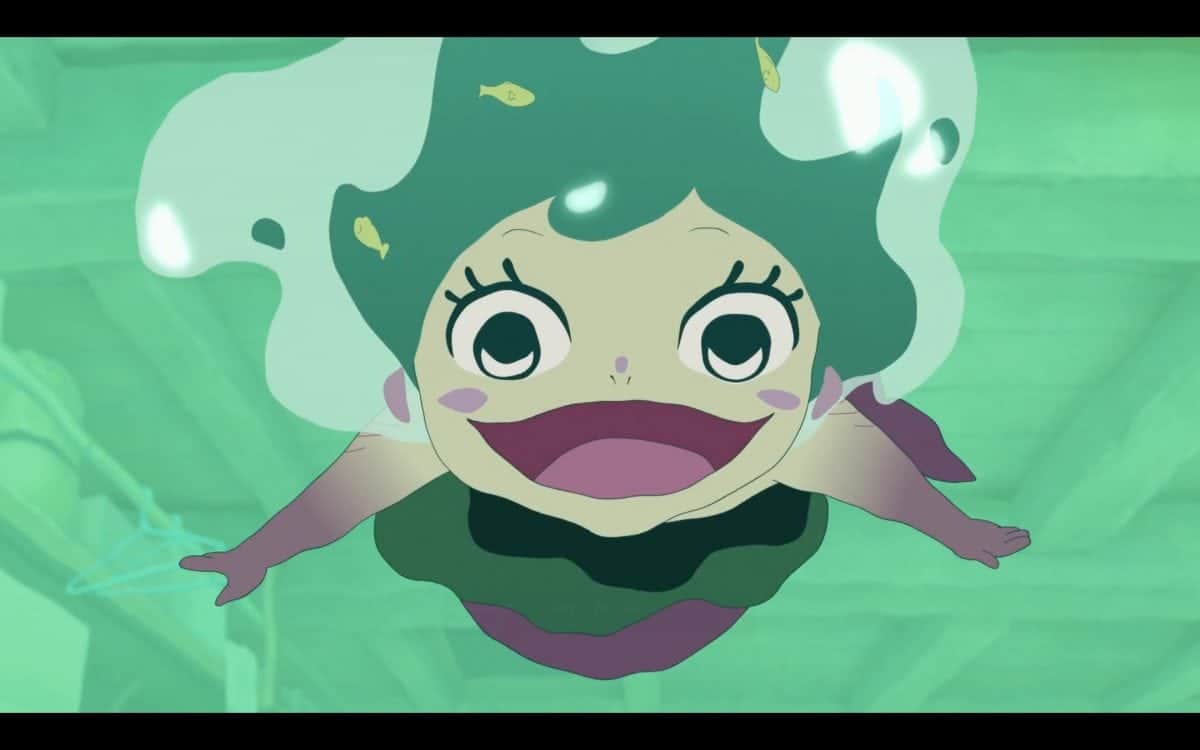 It has always taken something special for Japanese animations to register with a global audience. Over the years, films like Akira, Ghost in the Shell, and Spirited Away have captured viewer’s hearts across the world. But even though a large number of animes get produced each year, only a couple ever manage this feat. The challenge then for Lu Over the Wall is to see whether it can transcend the tropes of its genre, and reach out beyond the usual fan base.

Set in the fishing town of Hinashi, the film follows Kai (Shôta Shimoda), a shy 14-year-old who spends his spare time making music in his bedroom. He is generally downbeat, but one day he is coerced into a band by his friends. In the seas outside the town there are rumoured to be merpeople, and when the band play, one by the name of Lu (Kanon Tani) emerges from the water to see them. Kai and Lu soon become friends, but as the town finds out that the merpeople are real, they become suspicious of Lu’s mysterious powers.

There is no doubt that Lu Over the Wall is a creative and imaginative story. The central premise is a fun idea, and the film cannot be faulted for its commitment to it. The narrative concerning the tower’s relationship with its merpople neighbours is fully explored with a sincerity and innocence that brings an undeniable charm.

Unfortunately this does not translate to the rest of the film. The dialogue is delivered in a hyper and overly childish manner that makes it difficult to take certain sequences seriously. It means that messages about living life to its fullest, and not wasting the time we have are lost within overexcited conversations. There is a similar quality to much of the music, and even though some of it can be quite nice, at other times it can be overly sweet and a bit annoying.

The animation is probably the film’s most disappointing aspect, however; for the most part is it dull, and unremarkable. Director Masaaki Yuasa has previously produced some incredibly vivid and well-crafted animations, most notably with Mind Game. Even his last film – The Night is Short, Walk in Girl – which I found to be thematically incoherent and narratively confused, had a free flowing style and beauty that could be arresting. During the odd moment when the animation is more vibrant, mainly when Lu is around or when they are under the sea, the colour pallet becomes oversaturated and akin to an advert for a children’s toy.

If, like most people in the UK, you only watch the occasional Japanese animation, there are better options than Lu Over the Water. Your Name, A Silent Voice, and The Red Turtle have all been released within the last year and are far more visually and narratively interesting. Masaaki Yuasa’s latest animation, by comparison, just doesn’t have the same craft or subtly.