By Anna Power James Franco directs, with genuine affection, his take on the much loved cult classic film The Room, revealing the surreal story of its enigmatic oddball director Tommy Wiseau (played by Franco), and his bromance with lead actor Greg Sestero (Dave Franco) in this dramatic rendering of a behind the scenes – making […] 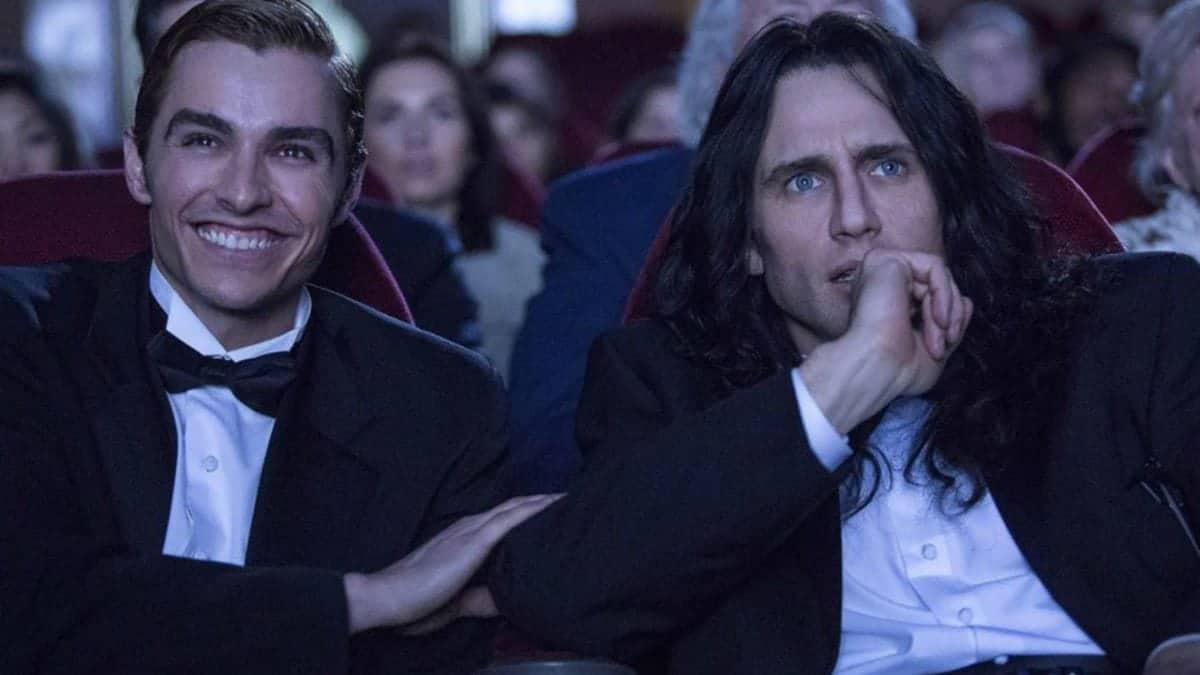 James Franco directs, with genuine affection, his take on the much loved cult classic film The Room, revealing the surreal story of its enigmatic oddball director Tommy Wiseau (played by Franco), and his bromance with lead actor Greg Sestero (Dave Franco) in this dramatic rendering of a behind the scenes – making of “the best worst movie ever made”.

Meeting in drama class in San Francisco, where a handsome but cripplingly shy Sestero fumbles his way through a scene from Waiting for Godot, painfully mumbling lines and stammering, only to be followed by the larger than life figure of Tommy Wiseau – resembling an ageing 80’s rocker (despite claiming to be in his 20’s), complete with long permed hair and studded belts (plural) – who reenacts an over the top Stanley Kowalski screaming “Stellaaaaah” and literally climbing the walls. Sestero decides to enlist the help of Wiseau to improve his confidence on stage, and a budding bromance begins. Calling him “babyface” much to Sestero’s mother’s concern, Wiseau acts more like a jealous possessive lover than a friend. Seemingly on a whim he whisks Sestero off to LA to live with him in his “pied a terre”, joking that they would share a bedroom and then when Sestero brings a girl home for the first time, throws a full blown tantrum. When unsuccessful in winning roles – one producer cuttingly tells Wiseau “you have a malevolent presence” – he refuses to be typecast as the villain and screams “I’m hero”! With an Eastern European accent and an aversion to indefinite articles – despite claiming to be born American – the mysterious Wiseau then decides to make a movie staring himself, and enlists Sestero as co-star. And so the pair embark on the now infamous film project, with the help of Wiseau’s mysterious personal fortune, whose source remains a mystery throughout.

A hugely successful aspect of the film is James Franco’s career best performance, in which he completely immerses himself in the colourful character of Wiseau, losing himself Meryl Streep style, rendering him unrecognisable. He establishes a delicate balance between making Wiseau a purely comical character, and offsetting this with insight into his troubled, vulnerable persona that keeps you intrigued and oddly invested in Wiseau, despite his behaviour.

The Disaster Artist is a bittersweet, comical story of unrequited love, and monumental ego at work. Laughter, however, dominates – whether it be at Wiseau, or the foolish self-seeking that surround him on his farcical flight of whimsy, and disastrous foray into film making that would infamously go on to delight audiences. It’s a compelling, raucous ride that shouldn’t be missed.